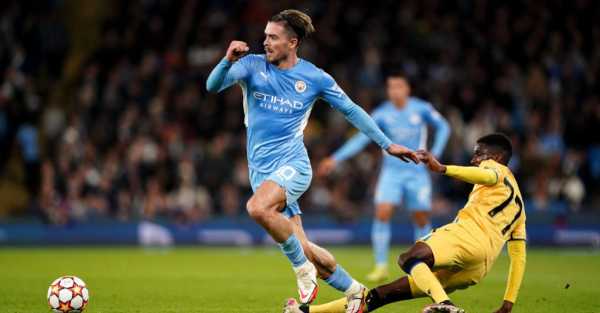 The England midfielder, who joined City in a £100 million (€117 million) deal in the summer, has missed the Premier League champions’ last three games with a knock sustained on international duty.

Team-mate Phil Foden is also hoping to prove his fitness after being sidelined for matches against Paris St Germain and West Ham in the past week.

Manager Pep Guardiola said: “In the training sessions, for Jack yesterday was his first minutes with the team. For Phil too.

“Today both will be tested to see if they can travel tomorrow to Birmingham to play.”

The midweek Premier League trip to Villa Park looks like it is coming too soon for playmaker Kevin De Bruyne.

The Belgium international contracted coronavirus during the international break earlier this month and has only just completed his isolation.

“Kevin still didn’t train,” Guardiola said. “He’s negative from the last test, but he could not train.”

The game will see Guardiola come up against Steven Gerrard for the first time since the former Liverpool captain became a manager.

Gerrard has won his first two matches since leaving Rangers to take charge at Villa following the sacking of Dean Smith.

Guardiola added: “If he’s a manager in the Premier League, he’s already a good manager.

“I don’t believe there is one single manager in the Premier League, or even the Championship, who is not good. They are of quality.”