The Ireland Under-20s closed out a famous Grand Slam success in Colwyn Bay tonight as late tries from replacement Colm Reilly and Thomas Clarkson sealed a hard-fought 26-17 bonus-point win over a strong Wales side.

Those scores during the final eight minutes saw Ireland win their first Under-20 Grand Slam since 2007, a magnificent achievement given they were 10 points behind early on and played their final round clash without talismanic half-backs Harry Byrne and Craig Casey. It was the Ireland U-20s’ maiden victory in four visits to Parc Eirias, a venue they travelled to already assured of a first U-20 Six Nations title in nine years.

Jonathan Wren’s try just before half-time saw Noel McNamara’s youngsters recover from a nervy start to trail 10-7, having gone behind to Aneurin Owens’ 10th-minute try with Cai Evans, son of Welsh rugby great Ieuan Evans, kicking five points. The visitors had two tries from Scott Penny and Sean French disallowed as they were stopped just short of the line.

They had a third one chalked off for a forward pass from French, and Wales maintained their three-point lead with Jac Morgan’s seven-pointer cancelling out Dylan Tierney-Martin’s fourth try of the tournament – an opportunist 46th-minute score. Evans then missed a crucial penalty and Ireland, with their bench growing in influence, stung the young Dragons with Reilly scampering over from a 72nd-minute ruck and ever-present tighthead Clarkson muscling over right at the death. 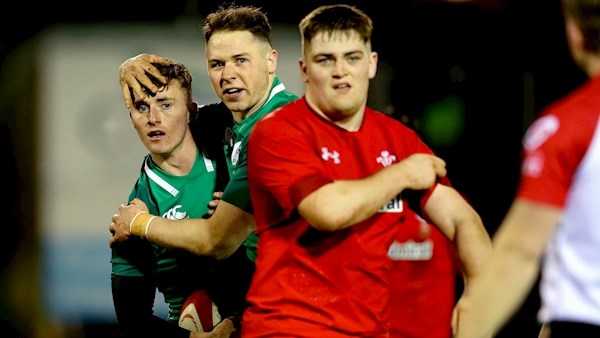 Healy and Cormac Foley both started at half-back, coming in as late changes for Byrne (hip flexor) and Casey (knee) who both fell just short in their injury recoveries. McNamara’s unbeaten charges had to soak up the early pressure after a Tierney-Martin overthrow and a subsequent maul infringement, but the defence stood firm and Rhys Davies leaked a scrum penalty.

Nerves were certainly evident and the visitors duly fell behind, the defence being sucked in and Tomi Lewis took advantage of the space on the right wing to take on Jake Flannery on the outside and lob a pass back inside for centre Owen to finish off a well-worked try, which Evans converted. In response, Healy chased his own clever kick but was guilty of a high tackle on the covering Evans.

Ireland’s first couple of attacks in the Welsh 22 had them inches away from a try. TMO Stuart Terheege ruled that Penny and French were short on both occasions, the Leinster flanker just inches away from driving in under the posts and strong-running centre French breaking a tackle off a scrum but the match officials adjudging that he knocked on as he stretched for the line.

The table toppers lost hard-earned field position with full-back Flannery fumbling a high ball, yet Ireland’s reliable scrum eked out another penalty to march them back downfield. Nonetheless, the Welsh remained dangerous on the counter, scrum half Foley needing to scramble back to deny Lewis a try after the well-marshalled John Hodnett had knocked on near halfway. 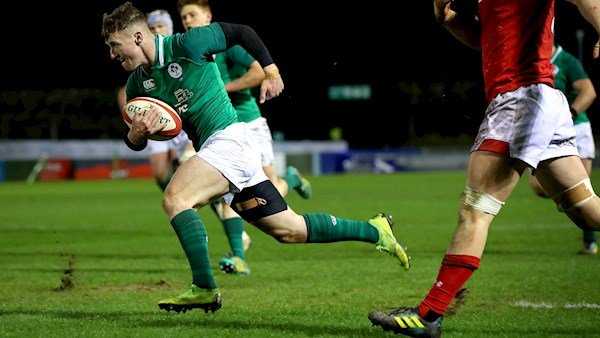 Ireland captain Charlie Ryan was isolated on the ground, another error coughing up a penalty on the half hour mark which Evans brilliantly drilled over from just inside the Irish half. Wales continued to chop down Hodnett on the carry, slowing down the Irish attack, but finally some space opened up for the back-three late on and they ruthlessly took advantage.

Turnover ball was shipped out to Ulster’s Angus Kernohan and he blazed up the right touchline, breaking past halfway and retaining possession. Wales scrambled back but quick ruck ball was moved to the left where Penny ran hard, absorbing a tackle and getting his hands free to find Wren who expertly cut in off his wing to evade the final defenders and touch down. Healy’s conversion made it a three-point game.

Ireland upped the ante in a rain-hit third quarter, beginning with Penny’s turnover-winning tackle on Wales captain Dewi Lake. Healy won the kicking battle to put his side back into scoring range and although the subsequent maul was grounded, the prolific Tierney-Martin bounced up and used his pace and power to crash over in the left corner. The TMO decision went Ireland’s way this time, and Healy coolly added the extras for a 14-10 lead.

Busy TMO Terheege was involved again a few minutes later, pinpointing a forward pass from Liam Turner which spoiled a superb French break and offload to set up Kernohan to go over by the right corner flag. However, Wales’ bench gave them a timely lift, Scarlets’ Ryan Conbeer surging in off the left wing to send openside Morgan in under the posts in the 58th minute. 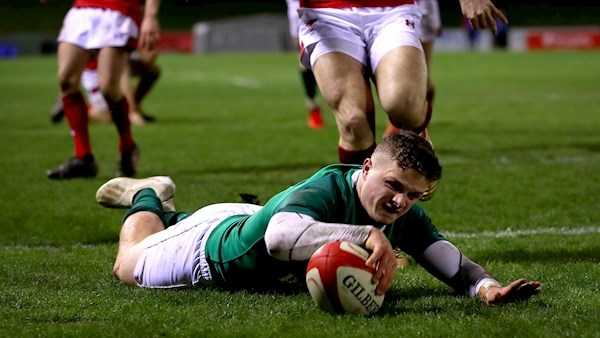 Evans converted for a 17-14 scoreline but he was wayward with a 63rd-minute penalty attempt from halfway, with a subsequent maul turnover allowing Ireland’s replacement scrum half Reilly to quickly get his hands on the ball. Wales should have made more of a Tiaan Thomas-Wheeler break, but Kernohan came up trumps with a vital tackle on Conbeer and a subsequent penalty win.

Rob Russell, another of the Irish reserves, did well to defend a dangerous chip in his own 22 and his Dublin University club-mate Ryan Baird also made an impact in the lineout and as a ball carrier. The strength-in-depth was key on the night with John McKee punching a hole in midfield and then Reilly, spotting the absence of a pillar defender, showed terrific pace off the mark to spring clean through from a ruck, scoring past full-back Evans.

Flannery was unfortunate with the left-sided conversion which bounced away off the near post, leaving the game delicately poised at 19-17. Wales forced a turnover to give themselves a shot at replying, but Martin Moloney’s breakdown skills won Ireland a relieving penalty. They worked their way downfield, sending a penalty to the left corner with just minutes remaining.

After the tiring Welsh pack denied the Irish maul, Buccaneers clubman Reilly used the ball intelligently from a penalty advantage with French’s quick hands in midfield also proving important. The visitors’ adventure was rewarded when Clarkson dived over from a close-range ruck. Flannery converted with the last kick, his team-mates erupting in celebration. The new U-20 Grand Slam champions were officially crowned when injured skipper David Hawkshaw joined Ryan to lift the trophy together. 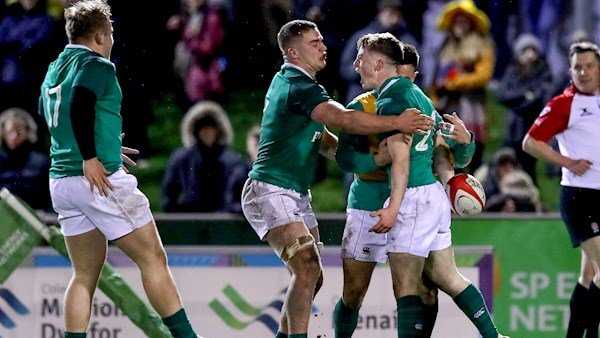