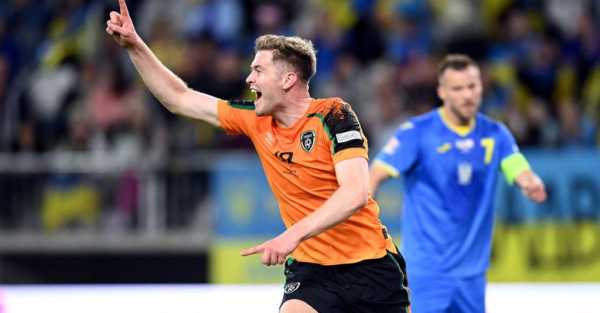 It’s Ukraine 1 Republic of Ireland 1 into the second half of their Nations League game in the Polish city of Lodz.

Nathan Collins put Ireland ahead on 32-minutes with a sensational individual goal.

The nominal home side levelled just two-minutes into the second half.

Ukraine were back on level terms within two minutes of the restart when Yarmolenko got half a yard on James McClean to cross low to the far post, where striker Dovbyk tapped home unopposed.

In the first half Kelleher and Alan Browne both denied Mykolenko within seconds after he had been played in by Mykola Matviyenko, and it was the Republic who took the lead in stunning fashion 14 minutes before the break.

Central defender Nathan Collins cut out Shaparenko’s pass and skipped past three challenges before stabbing a shot past the advancing Riznyk.

Midfielder Ruslan Malinovskyi tested goalkeeper Caoimhin Kelleher with a well-struck 11th-minute attempt as Ukraine settled into the game after Ireland had started on the front foot.

However, Ireland might have taken the lead with 18 minutes gone when Jason Knight took advantage of Illia Zabarnyi’s poor control to cross for the unmarked Troy Parrott, who headed wastefully across goal.