0:47 Peter Wright just misses out on a spectacular 155 checkout and lets Devon Petersen in to claim a 5-2 victory

White had given himself hope by producing the second-highest average of the tournament to end World Grand Prix runner-up’s Dirk Van Duijvenbode’s hopes of another fairy-tale run on the televised stage.

White took out finishes of 132 and 120 and hit all five of his darts at a double in a 5-1 victory that put Petersen through before his match against Wright and left the world champion fighting to stay in the tournament. 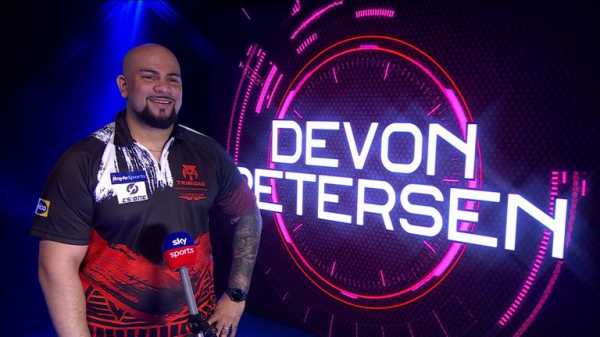 2:43 Devon Petersen talks about missing his family and new born baby after being on the road touring with the darts, after beating Peter Wright in the Grand Slam of Darts

Snakebite slipped 2-1 behind before the decisive fourth leg, where both men missed a host of darts at double before Petersen eventually pinned the outer ring after Wright’s ten missed darts for the leg to seize the initiative.

Trailing 4-2, Wright roused himself for one final push, but when he missed a dart at double 19 for a skin-saving 155, Petersen mopped up to advance and send the world champion crashing out.

Gerwyn Price and Jonny Clayton teamed up to win the World Cup for Wales a fortnight ago, and the pair came through Group H but only after a drama-filled contest between the Iceman and Ryan Joyce. 1:24 Gerwyn Price and Ryan Joyce exchange checkouts in their epic encounter in the Grand Slam of Darts

Clayton’s 5-0 win over Mikuru Suzuki effectively turned Joyce and Price into a decider as to who would join the Ferret and it was two-time defending champion Price who hauled himself back from the brink.

A thrilling contest against Joyce featured four huge 100+ finishes and both men averaging in excess of 105 for much of the match, but Price, who saw Suzuki miss four match defeat against him on opening night, produced his very best when trailing 4-2. 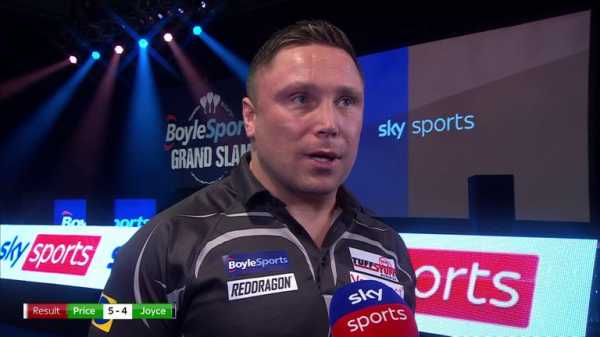 2:00 Gerwyn Price ‘never though it was gone’ after coming from 4-2 down to win 5-4 against Ryan Joyce in the Grand slam of Darts

Needing two breaks of throw he hit back to claim the seventh leg and then punished Joyce’s missed dart at bullseye for the match to force a decider, which the Welshman claimed with a 14-dart break to top the group.

Clayton has set his sights on singles major glory after teaming up with Price to land his first major honour and ruthless finishing ensured a 5-0 win over Suzuki, the BDO women’s champion who lost all three games for the second successive year.

Michael Smith and Jose De Sousa took the two spots on offer from Group C, with Bully Boy sealing top spot thanks to victory that ended Krzysztof Ratajski’s hopes of a place in the second round. Smith recovered from 10 missed darts at double across the opening three legs to turn a 2-1 deficit into a 5-2 success and a meeting with England team-mate Rob Cross in the last 16.

The world No 4 needed just two legs to ensure his progress and when he levelled the contest at 2-2 his place in round two was secure. Ratajski’s hopes were still in tact but he needed to reel off three straight legs and it wasn’t to be as an improved performance on the outer ring saw Smith claim a 3-2 lead to end the Polish Eagle’s campaign and allowed Bully Boy to power to the finishing line.

De Sousa had kicked off the night in third place in the group but ensured his debut in the event would continue with a 5-1 win over Lisa Ashton that saw him into a last 16 date with Dave Chisnall.

The Special One won the European Darts Grand Prix last month but has yet to make a big impact in the televised majors and a dominant display against Ashton that featured six 180s, left the four-time women’s world champion winless on her second appearance at the tournament.

Michael van Gerwen maintained his 100 per cent record without matching the heights of his first two matches, thanks to a 5-3 victory over Joe Cullen, who was left to rue three missed darts for a place in the last 16. 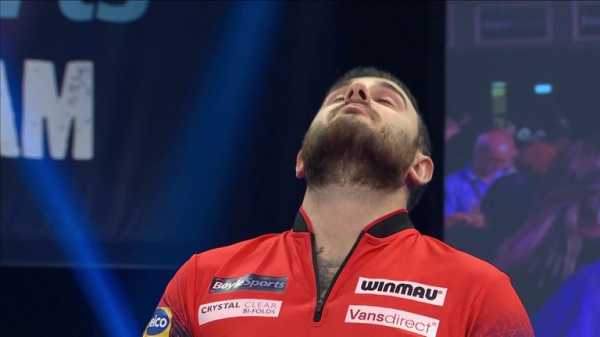 0:53 Joe Cullen misses out on progressing as he failed to win the leg he needed against Michael van Gerwen

MVG was assured of qualification having averaged more than 100 in victories over Gabriel Clemens and Adam Hunt, but an average of 92 was enough to account for Cullen, who needed four legs to progress after Hunt had shocked Clemens.

Clemens had begun the evening in second spot, but ended up bottom as he collapsed from a 2-0 lead to a 5-2 defeat that meant Hunt, bottom before the contest, was in with a chance of pinching second spot in the group.

Leg difference was going to be crucial in the match between Van Gerwen and Cullen, and when the Rock Star fought back from 3-1 down to level he looked to have the momentum required to claim the single leg he needed.

Van Gerwen edged 4-3 in front before Cullen blew his chance, leaving double seven with the Dutchman a long was back, Cullen managed to miss four darts for the leg and a place in the second round, allowing MVG to step and claim the win that gave Hunt the final place in the knockout stages.

Don’t miss a dart from the Grand Slam of Darts on Sky Sports as the action continues on Wednesday – join us from 3pm on Sky Sports Arena and follow us @SkySportsDarts for updates and clips throughout the tournament.