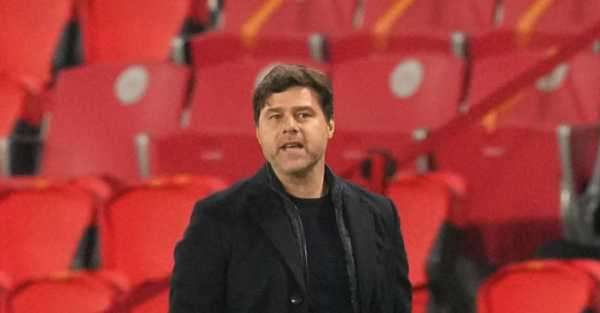 Paris St Germain boss Mauricio Pochettino, 49, is “secretly maintaining contact” with Manchester United in the hope he will be considered for the manager’s job, claims The Sun, which cites French daily Le Parisien. The Argentinian coach is reportedly a favourite for the permanent role vacated by Ole Gunnar Solskjaer following his sacking in November, with Ralf Rangnick in interim charge until the end of the season.

Staying at Old Trafford, the club are reportedly on the hunt for a new right-back and think they have found their man. The Mail reports Brighton have valued 21-year-old defender Tariq Lamptey at £40million, but United only want to pay £30m for him.

Arsenal have reportedly commenced talks with the agent of Leicester midfielder Youri Tielemans. The 24-year-old is not thought to be interested in extending his contract at the club which runs until 2023, according to The Mirror.

And Leicester have agreed to cancel the contract of defender Filip Benkovic 18 months shy of the deal’s expiry, the Leicester Mercury reports. The 24-year-old has struggled for game-time at the club and the paper says the Croatia international, who has spent time on loan at Celtic, Bristol City, OH Leuven and Cardiff, has now been linked with the Italian club Udinese.

Denis Zakaria: Manchester United have spoken with representatives of the Borussia Monchengladbach midfielder with the view to signing the 25-year-old Swiss, who will be a free agent in the summer, according to Germany’s Sport Bild magazine.

Dusan Vlahovic: Arsenal are still interested in the 21-year-old Fiorentina striker but will struggle to come up with the finances for Serie A’s top-scorer, according to Sky Sports.