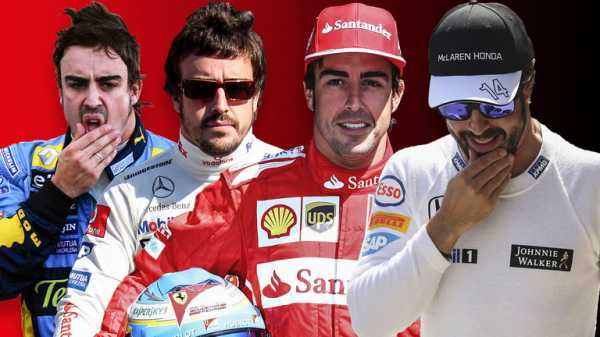 One way of looking at Fernando Alonso and his career choices is that he has been incredibly unlucky.

He may have argued with team-mates and bosses, as well as being embroiled in not one, but two Formula 1 scandals – but since claiming back-to-back championships he has spent over a decade signing with top teams as they veer on dramatic downward trajectories.

All the while, relatively new outfits such as Brawn, Red Bull and Mercedes have enjoyed success.

“I’ve driven for Renault, McLaren-Mercedes, Ferrari, McLaren-Honda. How many drivers would sign up for a career like that?” Alonso protested to Gazzetta dello Sport two years ago.

“Certainly I could have signed for Red Bull when it was just an energy drink. But nobody has a crystal ball.”

Alonso has indeed made brave and bold decisions, but the last of those looks certain to mean one of F1’s most prodigious talents finishes his 17-year career with a whimper, battling for points rather than titles.

There will always be the nagging question of ‘what if?’ when it comes to the Spaniard.

A wasted talent? A double world champion, but could and should he have won so much more? 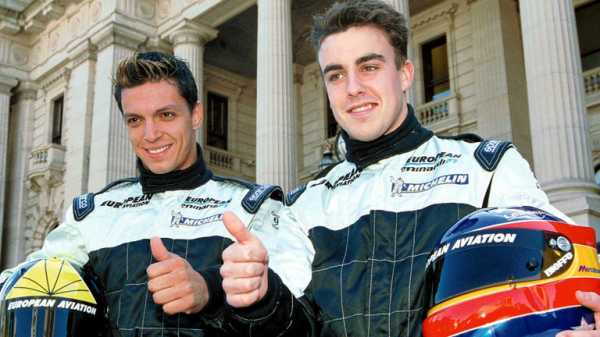 The early years: A talent breaks through
As soon as Alonso started impressing through the national karting championships in Spain, he was building a racing reputation that would stick in his later years. Alonso was a fiercely quick and determined teenager, always a few years younger than his competitors and always making the most of his amateur equipment.

He enjoyed his karting so much that even when presented with a rare free opportunity to take to single-seater racing in the Euro Open, he told former F1 driver Adriano Campos that he “would prefer to stay in go-karts”.

Alonso was eventually persuaded and although he was combining a debut season with Campos Motorsport with karting, he won the championship in 1999. And that was also the year he would meet Flavio Briatore, a man Alonso describes as a “key part of my career”.

A path to super-stardom was set out by part-manager, part-talent scout Briatore, who had guided Benetton to a maiden constructors’ title in 1995. Alonso tested and shone for Minardi in 1999, finished fourth in the Formula 3000 championship a year later and had a full-time F1 seat by 2001. At that time, the Minardi rookie was the third-youngest driver in the history of the sport. 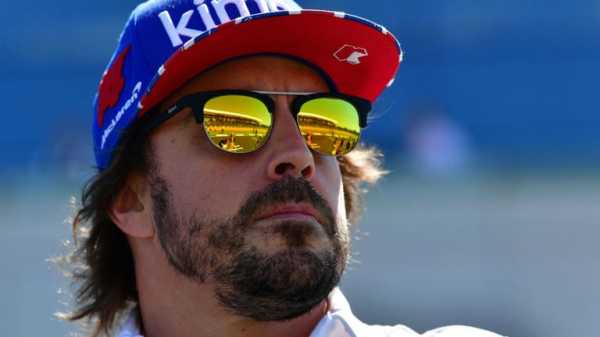 0:50 Martin Brundle says Fernando Alonso was at the end of his F1 tether.

Despite finishing 23rd in that year’s championship, Alonso was brought in as a Renault test driver in 2002 and once again had Briatore to thank as, the following season, he was handed another shot at F1 by the French team. Only this time, it was in a vastly-more competitive car.

“It was one of those things where you found yourself in the best place at the right moment – without being properly prepared,” Alonso told Sky Sports F1’s Damon Hill.

“At that time, we were not ready, I was 22 years old and I found myself fighting for podiums and for pole positions. It was a fantastic opportunity and a fantastic time.”

By 2005, not only was Alonso’s stock rising in rapid time – quickly filling a void soon to be left by Michael Schumacher as F1’s leading light – but race wins were coming in their droves.

Those frequent victories meant a historic championship was soon on the horizon, but they also had rival teams sniffing around the sport’s next big thing.

And before landing his first title, Alonso also had his first big career decision to make.

Leaving Renault for McLaren: The first wrong turn?
Alonso was crowned as F1’s youngest ever world champion at the 2005 Brazilian GP where, just before heading onto the podium to celebrate, his head was first turned by McLaren’s Ron Dennis.

“We all thought the door [to Alonso] was firmly locked,” Dennis recalled later. “I might have said ‘Congratulations on the world championship’ or something. And his response was along the lines of ‘Well, the thing about you guys is that you make it so difficult because you keep developing your cars’.

Three weeks later and the deal was signed – though Alonso would wait until 2007 before driving a silver McLaren car. Before that he would win another title at Renault, but he still believed it was the right time to leave. 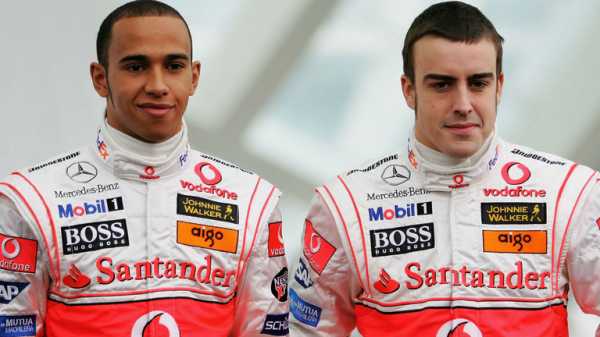 “I felt that my time there was coming to a point where it was no longer enjoyable,” Alonso said. “We won two championships, the team was struggling a little bit with performance, there were some things where we were clearly on a different trajectory and I said I need a new motivation.

“I thought – what happens if I win a world championship with another team? McLaren were very strong with Kimi [Raikkonen] in 2005, they were getting better and better in every single race with Kimi and Juan Pablo [Montoya] in 2006.”

But rather than teaming up with Raikkonen or Montoya, Alonso would be partnered by talented rookie Lewis Hamilton in 2007.

Alonso expected to be a No 1 driver at McLaren but Hamilton’s impressive speed from the outset made that impossible. Alonso feared his team were not helping him claim a third successive title, and felt let down.

“In that moment, I changed my career,” he admits. “I was hoping for better.” 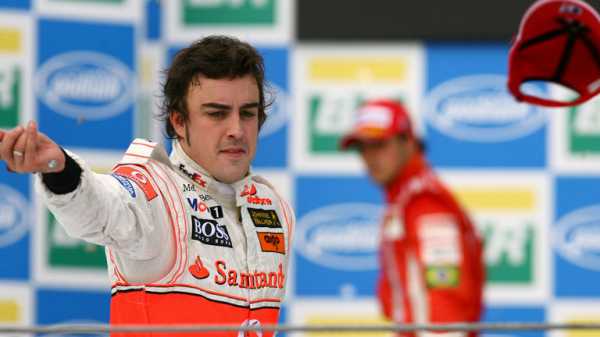 F1’s dream-team driver pairing were on a collision course, and it was an August Hungarian GP qualifying session that really lit the fuse in their plagued relationship. Alonso’s penalty for blocking Hamilton in the pits led to ‘Spygate’ leaks and a $100m fine for the Woking team.

There would be no coming back from that, with Alonso’s three-year contract ripped up at the end of his first season.

“Let’s say we clashed,” he says. “It was not a good understanding between all of them. It was not a problem with Lewis, it was just Ron [Dennis] and the high side of the team. We collided too many times, we worked differently.

“In that moment it didn’t work and it was the best solution for all of us at the end of the year to go in different ways.”

Renault were happy to bring their protege home.

Back to Renault and then on to Ferrari – the right place, wrong time?
Alonso was a driver in his prime back at Renault but, as he expected when he left the team in the first place, they could no longer compete for titles. The Spaniard would only win two races over the next two years, with another scandal – ‘Crashgate’ – the major talking point of his return.

If Alonso wanted a third world championship, he would have to leave again.

While McLaren clearly were not an option, there were still plenty of suitors for Alonso despite his troubled off-track past. Brawn even claimed he turned down a drive with them in 2009 – a year in which Jenson Button eased to an emphatic title.

But it was Ferrari, F1’s most successful team, where Alonso would end up next.

He agreed a deal during his first season back at Renault but would not replace Raikkonen until 2010. What was described as F1’s ‘worst-kept secret’ was out of the bag. 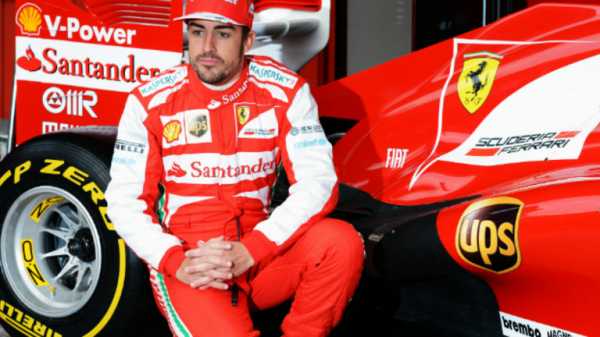 “Driving a single-seater for the Prancing Horse is everybody’s dream in F1,” he said. “And now I have the chance to make this dream come true.”

It may have been a dream, but once again, it seemed as though Alonso joined the right team, at the wrong time.

Benefitting from an excellent aerodynamic package and chassis, 2010 to 2013 was undoubtedly Red Bull’s era.

Midway through a 2014 season which Mercedes and Hamilton dominated, Alonso decided enough was enough. He had two years to run on his Ferrari contract and was even offered an extension, but was still desperate for another title.

“The feeling with Ferrari was that good that it was better to stop it there,” Alonso explains. “If not, it would get worse and worse.

“It’s the same thing in Renault, after I won the two championships. After five years in Ferrari I knew that in the next two years – 2015 and 2016 – they were not able, in my opinion, to produce a winning car.”

Alonso was proved right, but his next career move was quite the shock… 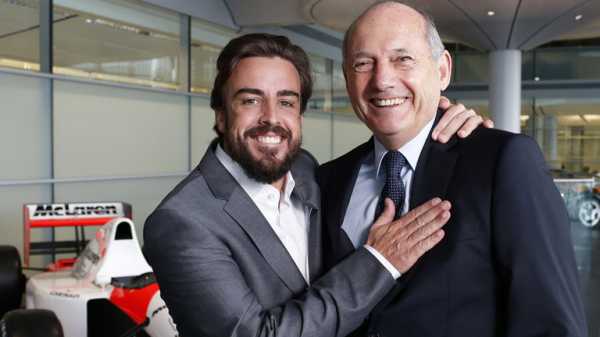 Back to McLaren for the Honda project
Personalities clashed, jobs were lost, reputations were in tatters – this was the story of Alonso and McLaren in 2007. But seven years later, Dennis and Alonso were side by side in Woking again, beaming as they gushed about the team’s new era.

McLaren and Honda were back together in reprising one of the sport’s most successful and historic team and engine partnerships. This, Alonso believed, was an opportunity not to be missed.

“It seems Honda drew Fernando Alonso back to McLaren,” said Sky F1’s Ted Kravitz at the time, with the multi-world champion impressed by the firm’s resources and staff upon visits to Japan.

Alonso and Dennis concurred that this was an engine formula where only ‘works teams’ could win championships – though there were other motives for his return. 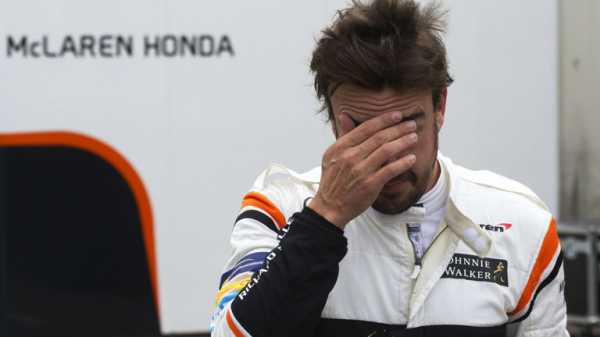 The optimism was certainly there and it has looked much more harmonious both off-track and on camera between the two parties than it was in 2007.

But the rekindling of this relationship was undoubtedly a momentous error for Alonso and his career.

Honda were a year behind their counterparts in terms of engine development in the hybrid era and, although a frustrated Alonso could have done little more to make the project work once making his decision, he failed to finish a race more often than scoring points over three years powered by the Japanese outfit.

Honda were dumped by McLaren as they switched to Renault for the 2018 season, but though that convinced Alonso to stay for another year, it never looked likely to bring the Spaniard race-winning success again.

He may not see it this way, but it could be argued that Alonso, one of the most natural talents ever to set foot in an F1 car, wasted the final four years of his career.

And for that reason, there can be no great surprise that he decided to call it a day. 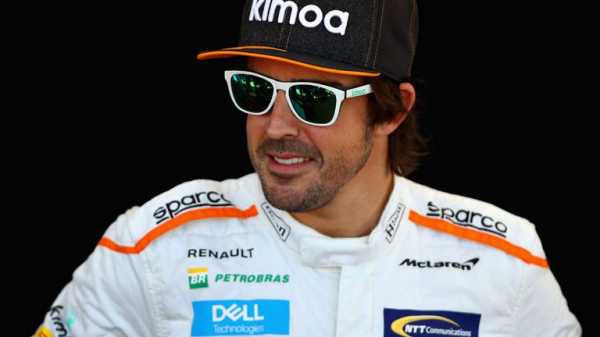 F1 will be back from its summer break with the Belgian GP, live on Sky Sports F1. The race begins at 2.10pm on Sunday, August 26. Get Sky Sports F1 – the home of every race weekend LIVE in 2018.