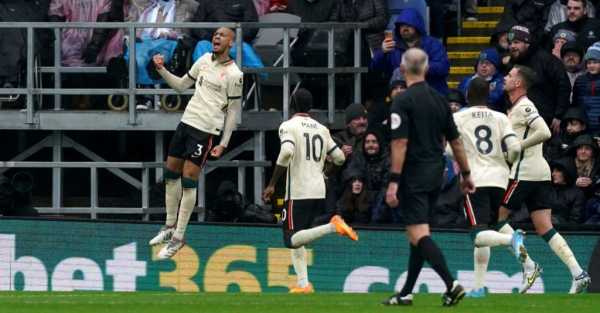 Fabinho’s fifth goal in seven matches helped Liverpool grind out a 1-0 victory over Burnley in testing conditions to maintain their pursuit of Manchester City.

With rain seemingly blowing around Turf Moor in three different directions at the same time, the conditions seemed ideal for an upset – one Jurgen Klopp’s side could ill-afford starting the game 12 points off the leaders.

But even though the visitors reunited their famed original front three of Sadio Mane, Mohamed Salah and Roberto Firmino for the first time since the end of October, it was their new-found goalscoring midfielder who made the breakthrough.

Since the turn of the year, no team-mate has scored more than the Brazil international, whose primary role of anchoring the midfield was also performed superbly in a scrappy contest which saw a number of players struggle.

Tottenham slipped to their third straight defeat after losing 2-0 at home to Wolves.

Dendoncker doubled their advantage when Ben Davies’ poor pass gave Wolves the incentive to come forward again and after Daniel Podence’s effort crashed off the woodwork,  the Belgian was on hand to double the lead and send Wolves above Spurs into seventh.

Referee Craig Pawson originally gave a penalty following Callum Chambers’ foul on Joe Willock but after VAR was consulted, the foul was judged to be just outside the area, Trippier stepped up and smashed the free-kick past Emiliano Martinez after it deflected off Emi Buendia.

Villa thought they had an equaliser when Ollie Watkins headed in from close range but VAR ruled him to be offside and the Magpies held on for their third victory on the spin.

Craig Dawson’s last-minute goal helped West Ham rescue a point against Leicester in a 2-2 draw at the King Power Stadium.

Jarrod Bowen latched on to a long ball from Issa Diop and coolly smashed home to give the away side the lead heading into the break.

Youri Tielemans converted a penalty after Aaron Cresswell handled the ball inside the area and the Foxes soon had the lead when Ricardo Pereira dived in at the back post to head past Lukasz Fabianski.

However, Dawson was on hand to finish past Kasper Schmeichel for the equaliser despite claims that it came off the defender’s arm.