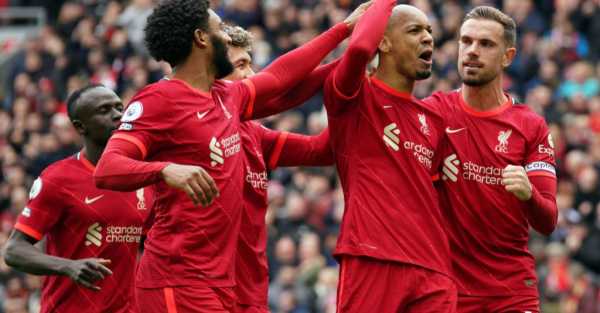 Former Liverpool striker John Aldridge insists winning the Premier League has to be the priority for his old club as they head into a potentially pivotal clash with title rivals Manchester City.

Jurgen Klopp’s quadruple-chasing side have already won the Carabao Cup, face City again next weekend in the FA Cup semi-final and have one foot in the last four of the Champions League after a first-leg win at Benfica.

But Aldridge, who won the league and FA Cup in the late 1980s with the Reds, believes the title is the most important trophy to win.

“It’s (a quadruple) a big ask. The big difficulty Liverpool have got is the rearrangement of games,” he told the PA news agency.

“We’ve got this far in the FA Cup, in particular, and then you have the Champions League to contend with. It is going to be hard.

“You just take every game as it comes. If we were to win the league this year after being out of it completely – it was all over at Christmas – it would be some achievement I’d have to say.

“I love the Champions League, the fact we have won it six times – twice as much as any other team in England – means it is close to my heart but the league is the league. Bread and butter as they say.”

Former defender Jason McAteer agrees, even if Klopp’s side are chasing a seventh European Cup which would put them level with AC Milan and behind only Real Madrid in terms of overall success in the competition.

The ex-Republic of Ireland international believes another title win will be important for fans as the last, long-awaited one, was achieved behind closed doors in the depth of the coronavirus pandemic.

“For me winning the Premier League after 30 years was sensational but it came at a cost of where we were as people and what the world was going through in the pandemic,” McAteer said, speaking at the former players’ association Forever Reds golf day at Royal Birkdale to raise money for local charities.

“And as great an achievement as it was, a phenomenal achievement, we weren’t there to celebrate.

“After the Champions League win (in 2019) and the tour around the city where nearly a million people turned out it was sad we missed out on that with the Premier League title.

“Fingers-crossed we get over the line and win the Premier League and celebrate together as one big, happy family.”

To do that, the Reds might have to get the better at the Etihad Stadium – where they have won just twice since 2012, with only one of those victories coming in the Premier League.

“A momentous month? It feels like it has been like that for six months trying to hang on to City’s coattails,” McAteer added.

“The points gap was 14 at one stage, albeit with a couple of games in hand, but points in the bag is what you want.

“I think everyone wrote Liverpool off, which was a very dangerous thing to do.”

McAteer believes if any side can pull off an unprecedented quadruple it will be Klopp’s.

“They have been smashing records for the last five years under Jurgen for fun,” he added.

“It is something they will be desperate to do but no team has ever done it and there is a reason why and that is because at this time of the season mental and physical fatigue sets in and in the past it has been one game too many for any manager or team.

“But we have strength in depth, we have a manager who knows his way around all the competitions, he has faith in all his players with arguably the strongest squad he has ever had.

“We can cope with it, but you just never know in football. Quietly that (a quadruple) is what we want as fans – but we don’t want to be greedy.”