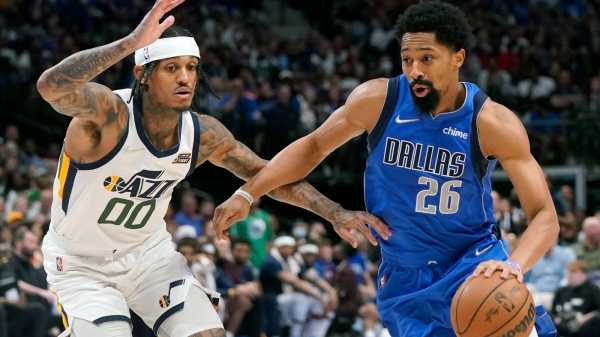 The NBA Playoffs tip off live on Sky Sports this Saturday evening as the Utah Jazz face the Dallas Mavericks at American Airlines Arena.

The Jazz and Mavericks head to the first round drifting in opposite directions, with Dallas winning 20 of 27 and the Jazz dropping seven of their last 11, blowing leads of 25 to the Clippers and 21 to the Warriors.

When the calendar flipped to 2022, they were top-three in the West. But the postseason serves as a reset, and in a series that should be closely contested, anything’s possible.

The Jazz once again proved to be a solid regular-season team for the most part, riding the distinct skills of Donovan Mitchell and Rudy Gobert to one win shy of 50. The core of the club remained intact from a season ago – with the exception Joe Ingles, who was traded at midseason – and this familiarity served Utah well.

The Jazz are anxious to recover from a pair of painful recent playoff exits, in 2020 to Denver and last season to the Clippers (who were without Kawhi Leonard).

The Mavericks, on the other hand, were rejuvenated by a midseason trade that brought Spencer Dinwiddie, whose late-game heroics upon arrival were welcomed by a club that leans heavily on Doncic for that role – but have been left reeling with the news that their franchise player will not be available for the series opener.

When their full compliment is available, Dallas will often use three guards – Doncic, Dinwiddie and Jalen Brunson – to their benefit and dare teams to match up with them, but will only have the latter pair available for Game 1. That could make Dinwiddie’s influence on the series all the more impactful.

The Mavericks could also use some help from the bigs, and were pleased when Dwight Powell responded as of late. Also, Dorian Finney-Smith has averaged almost 14 points since February.

1. Will Luka Doncic be too much to handle or will his absence (for Game 1 and possibly longer) prove pivotal? The All-Star just put together an MVP-worthy season by leading the Mavericks in scoring, assists, rebounds (which was especially impressive, at 9.1) and steals, ranking among the league leaders in all categories. He also is masterful in exploiting isolation mismatches, and in the past, Dallas created switches to put Doncic on Rudy Gobert.

Ordinarily this sounds insane, given Gobert’s defense, but the crafty Luka won those battles.

Doncic, though, is dealing with a calf injury which will keep him out of Game 1 and maybe Game 2 and the Mavericks have an 8-9 record without the Slovenian this season but have won the last four games he’s missed – albeit against lottery teams in Sacramento (twice) and Houston (twice).

2. Can Rudy Gobert and Donovan Mitchell get along? The two All-Stars are saying all the right things, but there seems to be smoke if not fire between them, just going by body language (from Mitchell when Gobert fumbles a pass, from Gobert when he doesn’t get touches).

Coach Quin Snyder pleaded for outsiders to refrain from breaking them apart, as if fans and media actually hold such power. In any event, winning cures all, and the best way to squelch all speculation is by winning a round or two and keep it moving.

3. What if Utah’s 3-point shots don’t fall? This has always been an issue with the Jazz, who rely on the long-ball more than most teams. When they’re efficient, they’re tough to beat. When they’re misfiring, the Jazz become unglued only because they lack the personnel and a system for a Plan B (no interior scoring, few players who can hit mid-range jumpers).

9.4 – Luka Doncic averaged 9.4 minutes of possession per game, the second-highest average for any player in nine seasons of player tracking. Doncic ranked second in the league in usage rate (a career-high 36.8 per possession) and was assisted on only 14.2 per possession of his buckets, the lowest rate among 215 players with at least 200 total field goals. The Mavs added a playmaker in Spencer Dinwiddie at the deadline, but Doncic has actually averaged 9.7 minutes of possession since Dinwiddie’s arrival, up from 9.2 minutes prior to that.

If Doncic can get healthy, that number should get even higher in the playoffs. As the Mavs lost to the LA Clippers in seven games last year, Doncic averaged an amazing 12.1 minutes of possession and registered a usage rate of 39.1 per cent, the second-highest mark in the last 25 postseasons. And this year’s first-round opponent isn’t the type of team that will take the ball out of Doncic’s hands.

In the regular season, 21.0 per cent of the Jazz’s opponents’ possessions, the league’s highest rate, were pick-and-roll ball-handler possessions. And as the two teams split their season series, the Mavs recorded assists on only 50.9 per cent of their field goals, their lowest rate vs any Western Conference opponent.

The rush of live games continues on Sky Sports this week with the Play-In Tournament and the start of the NBA Playoffs – see the list of games here and subscribe to watch the live action.