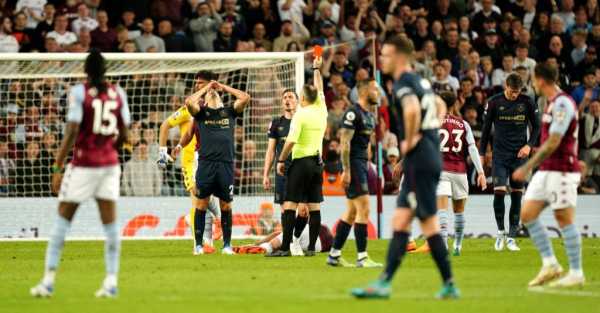 Caretaker Mike Jackson insisted Burnley’s plight was never helpless after they edged to the brink of safety.

The Clarets’ 1-1 draw at Aston Villa lifted them out of the Premier League’s relegation zone ahead of Sunday’s final games.

They are 17th, above Leeds on goal difference, with Newcastle visiting Turf Moor and their drop rivals going to Brentford.

Jackson, who had Matt Lowton sent off in stoppage time, said: “I never looked at it as helpless, I looked at it as we needed to get something from this game. You can’t hide away from it.

“For what the group went through tonight, the spirit and fight they put into it, was amazing. The game wasn’t a silky football match but we knew what we needed to do.

“It was the least we wanted to come away with, so we’re pleased with that.

“Nick was amazing. He has been doing that continuously, look at his quality and the way he has been progressing. He is in great form.”

Pope saved well from McGinn after 20 minutes but Burnley took the lead a minute before the break when Buendia chopped down Maxwel Cornet in the box and Barnes buried the penalty.

Villa levelled three minutes into the second half when Buendia ran from deep to meet McGinn’s cross and his volley squeezed past Pope.

Lucas Digne then survived a VAR check for handball with Jackson questioning the decision.

He added: “With VAR, there shouldn’t be an issue. It’s very clear. That’s why it was brought in. It’s gone, although we’ll rant about it on the way home and I’ll kick the dog when I get in.”

Pope saved his best until 10 minutes from time, keeping out Traore’s glancing header with a brilliant low one-handed stop.

There was still time for an excellent Tyrone Mings block to deny Wout Weghorst a late winner after Martinez saved from Connor Roberts.

Former Villa defender Lowton was also dismissed in stoppage time for a foul on Calum Chambers.

The point kept Villa 14th ahead of Sunday’s final-day trip to title favourites Manchester City but boss Steven Gerrard was unhappy Barnes stayed on the pitch after clattering Mings early on.

He said: “We should have been playing against 10 men from a very early stage. It’s a clear red card.

“We lacked that little bit of quality to score, in general play we were miles better than the opposition. We made an individual error to make a challenging task a lot more complicated for ourselves.

“The league doesn’t lie over 37 games, it won’t lie after 38 and 14th isn’t good enough for this club and we need to address that.”