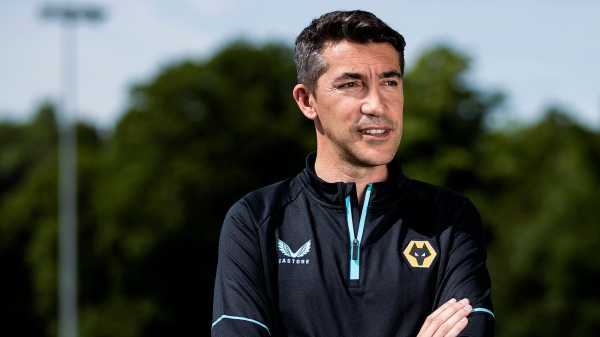 Twenty minutes into the conversation inside his office at Wolves’ training ground, head coach Bruno Lage calls out in Portuguese to a colleague in an adjacent room. A sheet of paper quickly appears with the players’ statistics neatly typed out.

It shows the win percentages for each individual player in the small-sided games that are a regular feature of training. Former Barcelona defender Nelson Semedo is top, the nimble-footed Joao Moutinho and one-time futsal international Max Kilman not far behind.

It appears to be rather more than just a bit of fun.

“After every game, we do the rankings and put them up around the building and you can see if you are in first position. The point of the exercise is to create more competition. They are fighting each other, complaining about refereeing decisions. That is what I want.”

The need for this hyper-competitive spirit is something of an obsession for Lage. He is speaking after an impassioned hour-long press conference in which he was particularly forthright in stating that he will not tolerate his players becoming too comfortable.

Nuno Espirito Santo was a popular figure at Molineux, taking Wolves from the bottom half of the Championship and establishing the club in the Premier League. But it was announced that his time was up just before the end of last season with his team in 12th.

The owners wanted more. So does the new coach.

It is easy to see why winning every so often is not the goal for him. Lage, 45, won the title in his previous job in charge of Benfica and later resigned with the club in second place. He is not here to be satisfied with a safe mid-table finish, he wants to strive for more.

“We are trying to create a new cycle and we want to improve every day. After 10 or 15 years, when I finish, then it is time to relax and be comfortable. But when I look back I don’t want to have wasted time just being there. That is what I want from my players.”

It helps to explain his agitation. Wolves have made an encouraging start. But they would have gone into the weekend in fourth had they held on at Leeds for what would have been a fourth consecutive top-flight win for the first time in almost half a century.

Lage makes no attempt to hide his frustration.

In fact, he is still thinking about a goal they conceded against Tottenham earlier this season. “It was five rebounds. Win the duels.” So, the passage of play leading to the stoppage-time penalty from which Leeds equalised is all too fresh in his memory.

“A guy who runs with the ball for 15 metres inside us? I don’t want anyone comfortable with that. Try to think what you can do better. Why can’t you do more? Little details. Let’s go. Work hard to be better because if you are better, for sure, we will get better results.”

Those with only a passing interest in events at the club might be under the misapprehension that change has been minimal at Molineux. This is another Portuguese coach, the 3-4-3 formation is familiar, and nine of the starters at Leeds played under Nuno.

But speak to those at the heart of it and another picture appears. The shift has been more significant, a greater focus on attack – “80 per cent of our work is offensive” – and a determination to become a front-foot team, pressing the opponent, keeping the ball.

Progress has not been straightforward. Wolves lost their first three, producing some impressive performances. They have since won four of the next six, but the displays have been rather more mixed. “There have been ups and downs,” says Lage.

“People maybe thought we were coming here to play 4-4-2 like we did at Benfica. But, at the moment, I don’t want to change too many things at the same time. I think more important than the system is the offensive dynamic that we are trying to create.” 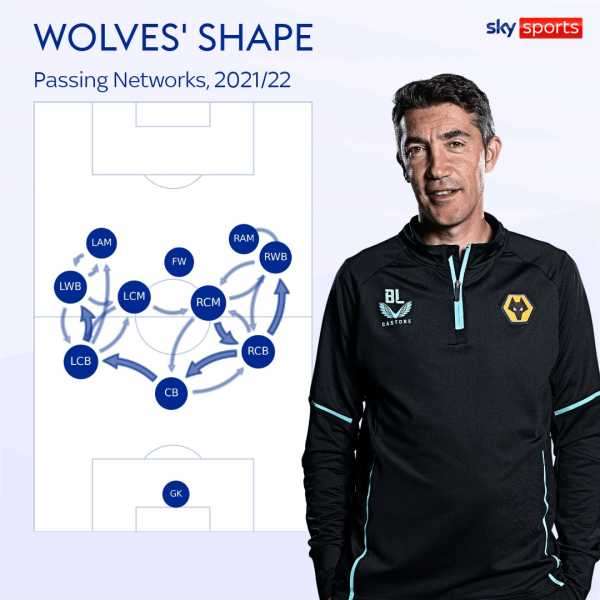 ‘Build-up attacks’ log the number of times that a team has a shot or work the ball inside the opposition penalty box after a sequence of 10 or more passes. Nine games into the season and only last season’s top four have done that more times than Wolves so far.

“I said to the boys, ‘We cannot spend the time defending, we need to have the ball’. OK, we don’t always have chance to go forward, but if we have the ball we are not defending.”

That mentality starts from the back, where the distribution of goalkeeper Jose Sa has made a difference. Conor Coady’s ability to switch play has long been an asset, but he is also adding more to his game. “He is trying to find the guys inside now too.”

Either side of the captain, Kilman and Romain Saiss are able to step out from defence to create overloads. “Saiss starts us playing from the back, finding the midfielders. Max drives with the ball and when the opponents come toward him, he finds the space.”

There is more risk to Wolves’ game now – Lage knows that controlling transitions will be important against Everton on Monday night – and Coady is not so protected. With Sa operating as a genuine sweeper-keeper, the whole team is yards higher up the pitch.

Is that an issue when the defence is not the quickest? Lage thinks not. “I hear people talk about whether our defenders are fast or not. But when you are playing you control the space. It is not a question of whether they are fast or not, it is a question of positioning.”

The early evidence suggests he is right. In being more positive, Wolves have conceded fewer goals than all but the top three teams in the Premier League. Similarly, they are defending set-pieces much better than before by leaving two or three players up the pitch.

“It is very simple,” says Lage. “If I put two up front, the opponent needs to leave four so they do not have as many bodies in the box. It is as simple as that. The duels become the biggest against the biggest because we leave the small ones up front.”

Out of possession, the change has been more fundamental. Statistically, no team pressed the ball less than Wolves last season, with only Newcastle turning over possession higher up the pitch on fewer occasions. It was a containment strategy, a passive approach. 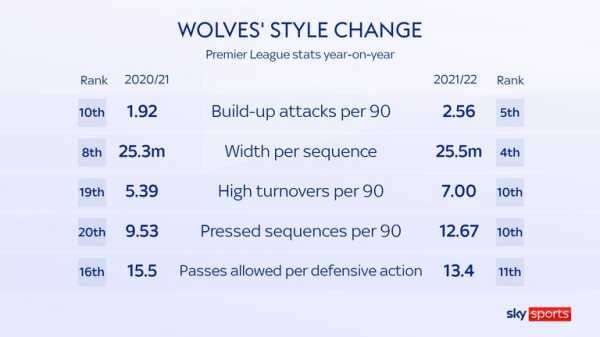 Wolves now rank in the top half for these metrics. They are not exactly leading the way as a pressing team but it is a transformation nevertheless given that this is a similar squad. Those four-versus-four games in training are all part of the plan.

“They don’t realise, they think they are just competing but they are giving us that aggressivity that we want,” explains Lage. “We create a lot of things through competition. We need to create habits in training, repeating these things again and again.”

The transfer market has helped to spark some change with the arrival of Hee-Chan Hwang proving a huge success. Not only has he scored four goals – as many as the rest of the squad put together – but in pressing from the front he has set the standard for others.

“Hwang runs with the ball and without the ball. Raul [Jimenez], the same. These two are a good example. Ruben [Neves], the same. Joao, the same. So, the guys who are 18, 19, 20 years old, who are fit and healthy, why can’t they? When it becomes a habit, it is easy.

“That is why I want to push [Francisco] Trincao hard. Fabio [Silva] is trying to work in this way to become more competitive. That is what I want from him, Adama [Traore] and Daniel [Podence] also. If they understand it is important for the manager, they will start to do it.” 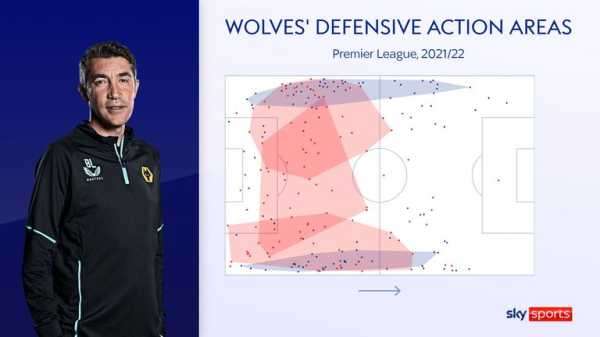 Traore continues to be an intriguing figure at Wolves. He missed a series of one-on-one chances in the early weeks of the season, the squandered opportunities leading to familiar accusations of a lack of end product. Still, it also hinted at the potential for more.

Lage prefers to use his wide forwards cutting inside, playing closer to Jimenez and penetrating the box, something Hwang has done to great effect. If Wolves are able to encourage Traore and, when fit, Pedro Neto, to do the same, it could be a difference maker.

“They know how to do it from outside. They do it very well. I am not saying our way to play is better than before because what they did before was amazing. We cannot forget that.

“What I want from my team is that now they understand how to play on the outside, how to create with crosses, now we can be good in the inside game because the opponent is saying, ‘OK, they are good on the outside so we close them down on the outside’.

“So we have to be able to switch to inside. That is what I want from them. It is a simple game. I have the ball. Where are the spaces? I need to attack those spaces to score goals.” 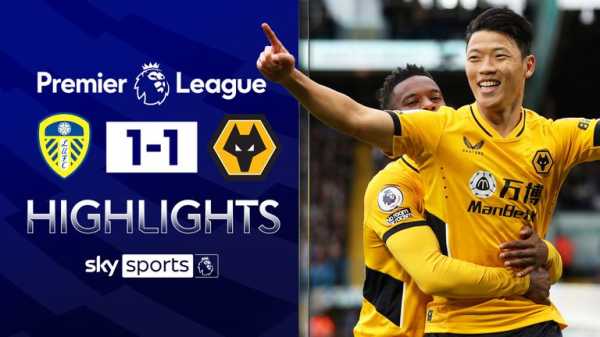 FREE TO WATCH: Highlights from Wolves’ draw at Leeds in the Premier League

Listening to Lage talk with such clarity, it becomes obvious why even the biggest admirers of his predecessor have been effusive in their praise – Coady describing him as “totally different” but “brilliant” too. A new voice, with new ideas, has been welcome.

It is apparent too that Lage is enjoying the opportunity to test himself against the best coaches around. Last week, Marcelo Bielsa. This week, Rafa Benitez. Is there a ceiling to what he can achieve at Wolves? Perhaps. But that will never be his mentality.

“There will be ups and downs, what is important is the direction. I don’t want to waste my time just to be comfortable. I want to look back and be proud of what I have done.”