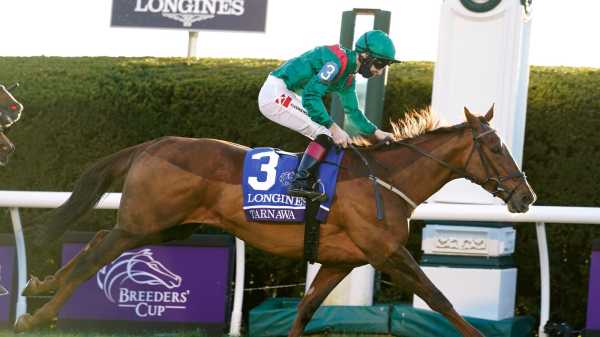 This year, more than any other, there is a welcome international feel to the Breeders’ Cup as some of Europe’s best head to the US to take on the home favourites.

A record 46 overseas entrants were initially signed up across the 14 races, this year returning to where the ‘turf meets the surf’ at Del Mar, where prize money of $31m is on offer.

Included in the list of visitors are some seriously strong British and Irish raiders, headed by returning champion Tarnawa for trainer Dermot Weld. 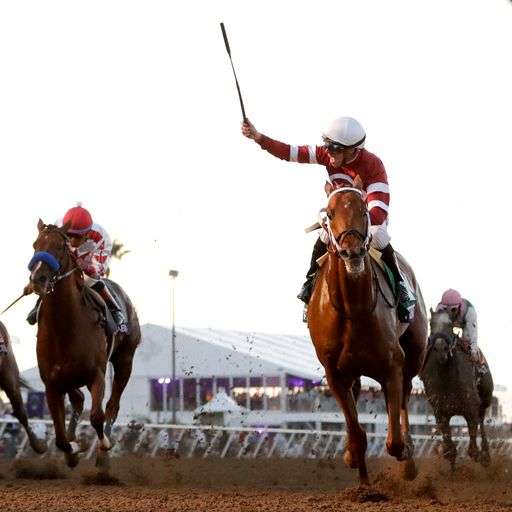 Here is a look at some of Britain and Ireland’s best chances of victory at the Breeders’ Cup, live on Sky Sports Racing from 8.30pm on Friday, November 5…

Despite having failed to follow up on victory in the Group Three Molecomb Stakes at Goodwood in July, Armor has run three races in defeat, never finishing outside of the top four.

His third in the Group One Middle Park Stakes at Newmarket when last seen in September is arguably as strong a piece of form as any and he deserves to finally take a top prize.

Trainer Richard Hannon believes he is still improving and developing physically so he could take top rank in this.

One of the most experienced runners in the field, the Irish raider is set to make his 11th start of the season.

Michael O’Callaghan’s colt, a son of Twilight Son, has been ultra-consistent despite winning just two of his 10 races, but reached new heights with victory in the Group Three Cornwallis Stakes at Newmarket earlier this month.

Despite the two-year-old’s busy campaign his trainer says he is “in the best form he’s been in all year.” 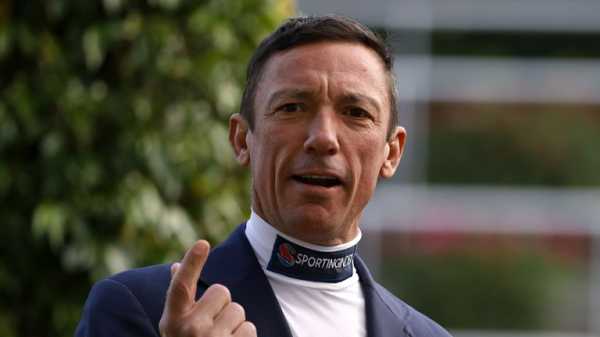 It is a busy time for Frankie Dettori, with an autobiography and feature film out, but the jockey is back in action at the Breeders’ Cup and says his best chance is Appleby’s Albahr in the Juvenile Turf.

David Loughnane and Amo Racing have got a seriously strong record with their juveniles and Hello You added to their list of winners after getting on the board at the third time of asking since a switch from Ralph Beckett’s yard in July.

After four promising runs at Group level, including finishing second in the Albany Stakes at Royal Ascot when under Beckett’s charge, the daughter of Invincible Spirit finally got her head in front in the Group Two Rockfel Stakes at Newmarket in September.

Her draw in stall six looks very workable and a mile trip should be just fine.

James Ferguson’s first ever Breeders’ Cup runner but one to take serious note of for the young trainer.

Winner of the Prestige Stakes at Goodwood earlier this season [with Hello You back in fourth], Mise En Scene was last seen when finishing a fast fourth in the bet365 Fillies’ Mile at Newmarket on October 8.

Ferguson blamed some bad luck in-running on that occasion and thinks the lightly-raced filly [just three career starts] could still have more to come. 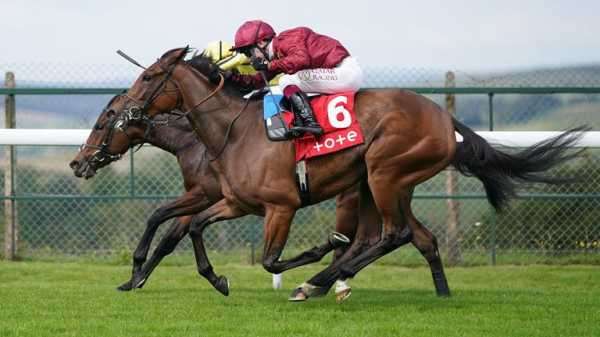 James Ferguson heads into this weekend’s Breeders’ Cup with his first ever runner, Mise En Scene, and the young trainer is excited to unleash his ‘very special’ filly.

A two-year-old “out of the very top drawer”, according to his trainer, Dubawi Legend lived up to his promise when chasing home next year’s 2000 Guineas favourite Native Trail in the Dewhurst Stakes last month.

A winner on debut at Doncaster, he somewhat disappointed on his second start at York, but was found to be ‘off-colour’ on that occasion.

As a result, he was given a nice break before the Dewhurst and remains unexposed, with Palmer expecting him to “grow up” during his trip abroad.

Even by Charlie Appleby’s high standards, 2021 has been a huge hit, thanks in huge part to the success of his dominant juveniles.

Unlike some of his stablemates, Modern Games has been brought along slowly, winning a Newmarket maiden and a Doncaster handicap before a career-best victory in the Group Three Tattersalls Stakes last time.

He is joined in the race by stablemate Albahr, but Appleby admits Modern Games possesses the classier skill set. 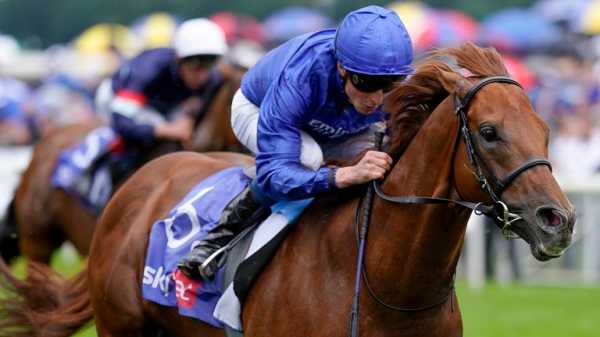 Charlie Appleby talks to Sky Sports Racing’s Matt Chapman about some of his chances in the Breeders’ Cup this weekend, including Modern Games and Space Blues.

A CASE OF YOU (Ado McGuinness)

A Case Of You will forever be remembered for giving Irish trainer Ado McGuinness a landmark first Group One victory when taking the Prix de l’Abbaye on Arc weekend.

The team have now opted for a US trip, choosing that over a stint in Hong Kong, as they chase a second top level success.

McGuinness had noted reservations about the tight track at Del Mar but will be pleased to see his horse drawn in stall six.

Emaraaty Ana has taken his form to a whole new level this year, downing July Cup champion Starman in his latest victory in the Sprint Cup Stakes at Haydock.

Given a break since that early September run, Kevin Ryan’s five-year-old will have been given the best preparation possible for a shot at the big time at Del Mar.

He lines up alongside stablemate Glass Slippers, winner of the race last year, with the pair coming out of stalls one and two. 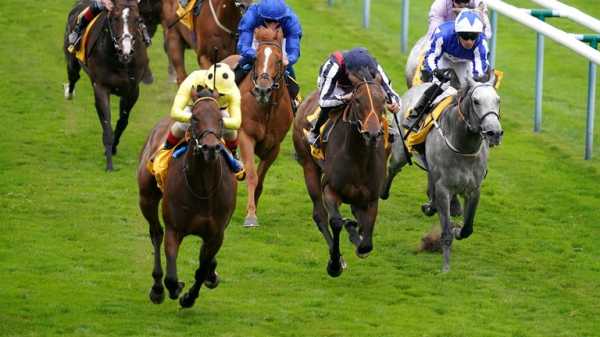 Things have not quite gone to plan this season for last year’s winner of this race.

After chasing home Love in the Prince of Wales’s Stakes at Royal Ascot, Audarya disappointed when sent off joint favourite for the Nassau Stakes at Goodwood.

A fourth-place finish in the Group One Prix de l’Opera at ParisLongchamp last time was far more encouraging and she looks to have a decent chance of becoming the first ever back-to-back winner of the race.

Love, 1000 Guineas and Oaks winner in 2020, has failed in three attempts since taking the Prince of Wales’s Stakes at Royal Ascot on her first start this season, finishing third in the King George and Juddmonte before a disappointing second in the Group Two Blandford Stakes at the Curragh in September.

Aidan O’Brien was happy enough with the Curragh run, what was supposed to be a prep race for the Prix de l’Arc de Triomphe before the four-year-old developed a temperature shortly before the ParisLongchamp feature.

The Irish trainer supremo has spoken positively about the track and ground at Del Mar suiting his filly so do not be surprised to see her bounce back in style. 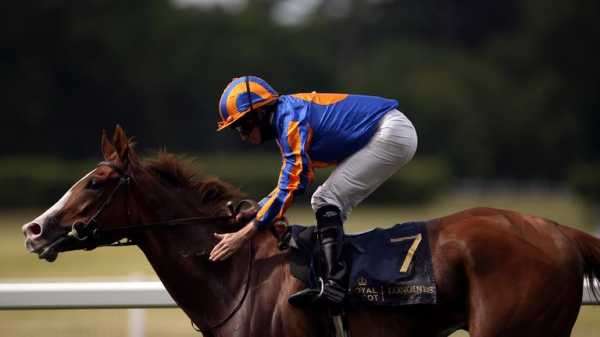 Aidan O’Brien gave Sky Sports Racing the latest on Love ahead of her run in the Filly and Mare Turf.

Charlie Appleby’s five-year-old arrives in the US in top form after back-to-back victories in the Group Two City of York Stakes and Group One Prix de la Foret at ParisLongchamp.

Space Blues has won seven of his last nine in all and it is going to take a seriously good one to get past him, even in this field.

Stablemate Master Of The Seas has a bit to prove after finishing down the field in seventh in the QEII last time.

It has been a long and busy year for Mother Earth, making seven appearances since kicking off the season in style with victory in the 1000 Guineas.

O’Brien’s three-year-old has only won one of those, but has been running with credit each and every time and there is no reason to think she can’t go close again.

Fifth in the QEII last time, Mother Earth was finishing faster than any other horse in the race at Ascot after being caught out the back of the field. 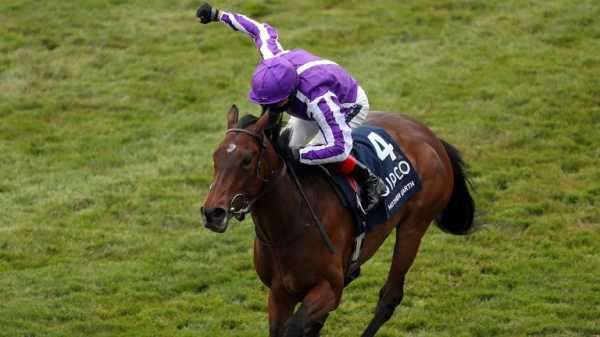 O’Brien is happy with Mother Earth’s draw in the Breeders’ Cup Mile and says, with a little luck in running, anything could be possible on Saturday.

The headline act of all the European raiders, Tarnawa returns to defend her crown, aiming to be the first filly or mare to win this race twice.

Not appearing this season until August, she made light work of the Ballyroan Stakes field before going down in epic battles with St Marks Basilica [in the Irish Champion Stakes] and Torquator Tasso [in the Prix de l’Arc de Triomphe].

The record reads as two defeats but that form is hard to match and she is the one to beat here once more.

“A young pretender”, according to Appleby, Yibir is in career-best form as he heads to Del Mar.

A gelding operation, the addition of a hood and a steady increase in distance has been the making of the three-year-old, winning three of his last four, including the Voltigeur at York.

He warmed up for this with victory at Belmont in the Jockey Club Derby and is the best of the rest, ahead of stablemate Walton Street.