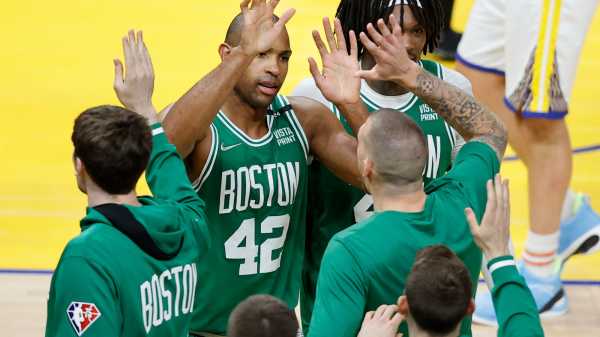 Jaylen Brown fuelled the late charge and scored 24 points, Al Horford hit six 3-pointers as part of a 26-point display, and the Celtics rode the most lopsided fourth quarter in NBA Finals history to record a 120-108 victory over the Warriors in Game 1 on Thursday night.

Their 40-16 final frame negated an outrageous first quarter from Curry where he scored 21 points on 7-for-9 shooting, including 6 of 8 made threes, to set a new record for 3-pointers scored in a single quarter in the NBA Finals.

Boston struggled to keep up with the Warriors’ snappy ball movement and shooters at every spot on the floor in those early stages but the Celtics made a key defensive change switching Marcus Smart onto the Draymond Green-Curry screen-and-roll and the Defensive Player of the Year shut him out in the second quarter.

Curry did go on to score 34 points in his return to the NBA’s big stage for the first time in three years, but the Warriors couldn’t sustain momentum from a 38-point third quarter that put them ahead 92-80 and collapsed in the fourth.

“It’s not ideal but I believe in who we are and how we deal with adversity, how we responded all year, how we respond in the playoffs after a loss,” Curry said. “So learn a lot from that fourth quarter, obviously they made a lot of shots. It seemed like they didn’t miss until deep into the fourth. When you have a team that just finds a little bit of momentum like they did and they keep making shots, it’s tough to kind of regain that momentum.”

As poor as the Warriors were in the late stages, the Celtics were brilliant, becoming the first team to trail a finals game by 10 or more points after three quarters and win by 10 or more. They are now 8-2 on the road in these playoffs.

Horford, who is celebrating his 36th birthday on Friday, is very much the veteran presence in locker room in his 15th-year in the league and more than five years older than any of his team-mates. The Dominican had played in 141 previous postseason games, the most ever before playing in the NBA Finals, before making his debut on the biggest stage on Thursday night.

When his chance came, safe to say, he delivered. 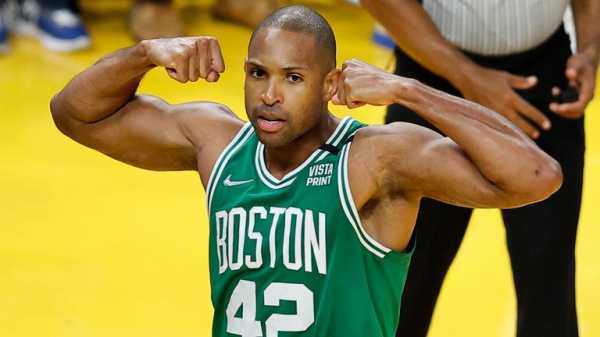 Al Horford put in an incredible performance in Game 1, finishing with 26 points, six rebounds, three assists and one steal

“I felt like the guys kept finding me time after time. Also Derrick White hit some tough shots there, too,” Horford said. “I was just getting the looks, knocking them down. That’s that.”

Boston made its first seven tries from long distance in the fourth and wound up 9-of-12 from beyond the arc in the period as almost everybody got involved in the 3-point flurry, with White finishing the game with 21 points and 5-of-8 from beyond the arc.

Jayson Tatum was the lone Celtics regular who struggled offensively, finishing 3-for-17, though he did have 13 assists.

“It’s an unbelievable feeling just to be here and competing at this level against such a dynamic franchise the last couple years,” Boston guard Payton Pritchard said. “I think we’re all just looking forward to the challenge to go through the series and try to get it done.”

White’s 3-pointer over Curry with 5:40 remaining tied the game at 103, then Horford hit from deep the next time down as the Celtics took their first lead since halftime.

Brown, who starred at nearby California for one college season, made consecutive baskets that tied the game at 47 with 5:03 left before halftime and the Celtics led 56-54 at the break. Golden State then used a signature third-quarter spurt, pouring in 38 points to build a big lead.

Brown scored five quick points to begin in the fourth and assisted on an alley-oop dunk to Robert Williams III as the Celtics pulled back within 92-87 with 9:35 remaining. The lead was four midway through the final frame before Boston blew past Golden State with a 20-2 run that made it 117-103. 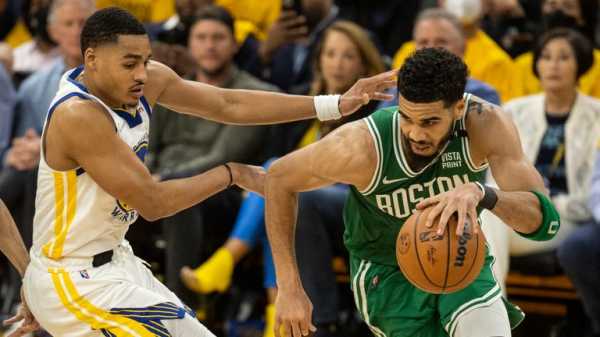 Warriors coach Steve Kerr believes that the volatility of the 3-point shot, and whether you make or miss them, is the key factor behind the huge momentum swings in the game as the pendulum lurched from one team to the other between the third quarter and the fourth.

“They make [nine] threes in the fourth quarter. So, I think it has everything to do with the 3-point shot,” Kerr said. “You didn’t see these kinds of swings even a decade ago because you didn’t have teams that could make threes from every position and teams that could string together a number of threes like most teams can these days.”

For the hosts, Andrew Wiggins scored 20 points in his finals debut and Draymond Green grabbed 11 rebounds before fouling out with 48.3 seconds left. Klay Thompson contributed 15 points as the Warriors began their sixth finals in eight years after making five straight trips from 2015-19 and winning three championships.

Game 2 is on Sunday night back at Chase Center, which you can watch live on Sky Sports Arena & Main Event from 12.45am and they will now be under intense pressure to win it, having dropped Game 1 if the likes of Green, Thompson and Curry want to have much of a chance of winning a fourth championship ring this year.