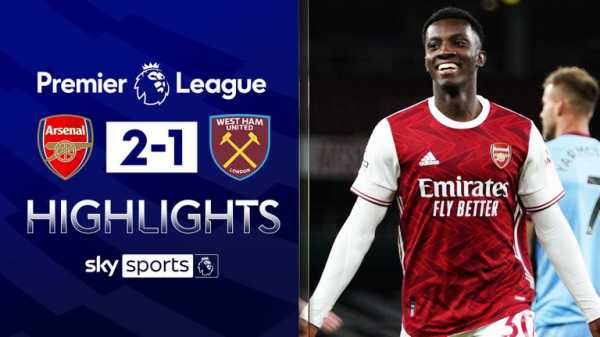 2:59 FREE TO WATCH: Highlights from Arsenal’s win over West Ham

It felt like a matter of time until the net finally bulged and West Ham – unrecognisable from the side defeated by Newcastle on the opening weekend – made their superiority count. As the game approached the closing stages, Arsenal had not had a shot since the 47th minute. The visitors, meanwhile, had attempted 10 in the same timeframe.

It was a position from which Arsenal would not have recovered in years gone by, but it is a measure of their progress under Mikel Arteta that, even on off-day such as this, they were still able to plunder a victory.

Having ridden their luck, they regained their composure. Then, when their opportunity arose, they were clinical, Bukayo Saka feeding Dani Ceballos, who squared for substitute Eddie Nketiah to do the rest.

At the end of it all, West Ham had taken 14 shots to Arsenal’s seven but it was the hosts who had the points, a victory to add to their opening day win over Fulham and ensure that the early-season optimism around the club is not punctured. Arteta screamed in delight at the final whistle, his fists clenched and a broad smile on his face. 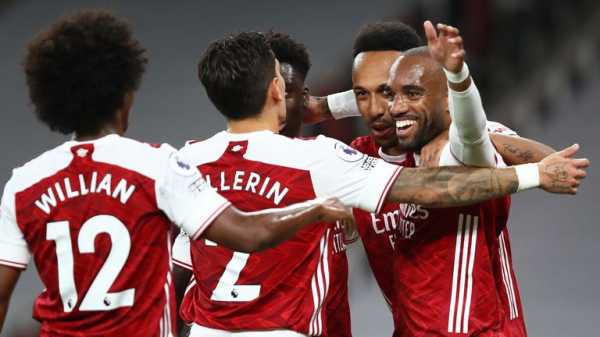 “What I liked was the approach that the boys had in the last 25 minutes, when I could seem them coming down a little bit, and they lifted up,” he told Sky Sports afterwards.

“Probably, a few months ago, we would have drawn or lost that game and today we won it. In the end, you have to find a way because you are going to have games like this through the season.”

Arteta’s delight was obvious. Arsenal’s next five Premier League fixtures include meetings with Liverpool, Manchester City and Manchester United, so taking maximum points from their first two games was imperative. But at the same time he was under no illusions about their shortcomings.

“I am really happy with the three points, but we have a lot to analyse because there were a lot of issues we created for ourselves in many moments,” he added. “We have to improve many things.”

The biggest issues were familiar ones. Arsenal dominated the ball at the Emirates Stadium for long periods, enjoying a 63 per cent share of possession, but they were unable to convert that possession into scoring chances and it wasn’t the first time. Since Arteta’s appointment, they rank 15th for shots on goal, sandwiched between Crystal Palace and Burnley.

It is an alarming statistic which comes down to a lack of creativity in midfield.

Ceballos eventually provided the match-winning assist, but that was the only opportunity he and Granit Xhaka created all evening. For the most part, they stroked the ball around harmlessly from the base of midfield, unable to unpick West Ham’s low block as Arsenal laboured in front of the massed ranks of claret and blue shirts.

Performances such as this are bound to make some supporters pine for Mesut Ozil.

The German, frozen out by Arteta last season, was once again left out of Arsenal’s squad on Saturday night. His contract has another nine months left to run, but the prospect of a return to favour grows fainter by the week. 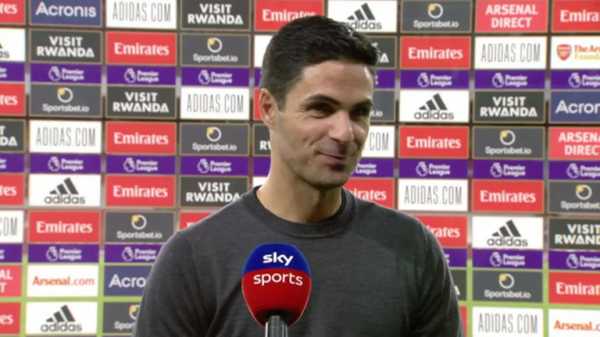 Without him, Arsenal are lacking a creative spark in the centre of the pitch and this performance underlined the need to change that. The club’s finances are such that they must sell before they can buy, but a midfielder in that mould must be a priority. Houssem Aouar, the Lyon midfielder reportedly wanted by Arteta, might be a suitable candidate.

It has, of course, already been a busy summer for Arsenal. Aubameyang’s new contract, finally confirmed this week, ensures they retain a world-class presence up front. At the other end of the pitch, Gabriel looks an immediate upgrade on their other centre-back options.

But there is still a need for something more in between. Arsenal are already a different beast under Arteta. Stronger, both mentally and physically, and more streetwise too. But until they can summon the creativity to match their newfound character, the progress will only go so far.