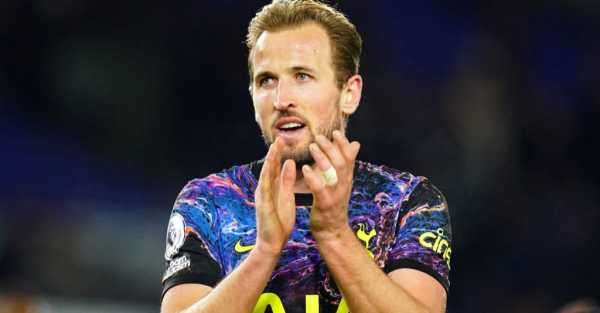 Antonio Conte has told Harry Kane he can fulfil his goalscoring ambitions in his Tottenham team after the England captain entered the Premier League record books.

Kane’s second-half strike in the 2-0 win at Brighton saw him become the record away goalscorer with 95 while also overtaking Frank Lampard to go fifth in the overall list with 178.

The 28-year-old, whose future is sure to be in the spotlight at the end of the season, has said Alan Shearer’s record of 260 goals is in his sights and Conte says he can help him overhaul it if he stays at Spurs.

“We are very happy because Harry is scoring a lot. He started this season and he struggled a bit because he didn’t score a lot,” the Italian said.

“Now we are very happy because as a manager I know that I have a world-class striker that in every game he can score.

“To have Harry in your team makes you stronger. Harry is starting to understand with this team, with the way we are playing, he has every game many chances to improve his record and score and to enjoy.

“I am seeing that he is enjoying to play with us together and with his team-mates and with this way we are playing.”

Cristian Romero put Spurs ahead in the first half as Conte’s men restated their position in the top-four race.

They are now three points behind Arsenal, who have a game in hand, while Spurs host West Ham on Sunday.

“The win means we are improving and we are trying to go in another step to try to be very close to the top of the table,” Conte said.

“It is right to have ambition and I put ambition to my players because it is important to have a target, a difficult target for sure because to reach the fourth place is not simple, it will be very difficult, at this moment we are ready to fight for every game, then sometimes it can happen that we lose the game like at United where we didn’t deserve to lose.

“We are showing great improvement and this is good for the present and the future. On Sunday we will have a crucial game against West Ham.

“They have the same target and we are talking about a team that in the last season they arrived before us, they are playing Europa League.

“To get three points on Sunday will be very important to continue to have a hope to reach fourth place.”

In contrast Brighton are in freefall, having lost their last six games.

Boss Graham Potter says the international break has come at a good time for his team.

“We need the time to reset it has been a tough few weeks, sometimes as human beings in that moment little things don’t go your way and you are not quite on the front foot as you would be,” he said.

“You have to credit the opponent, they played well today and they have got top, top players. The quality difference was there. We just weren’t good enough on the night.

“When you have had defeats you are not as confident as you could be. It’s not an excuse but it is understandable.

“You have to look at everything, that’s for sure. What we need to do is use the time to reset, to clear the head and get away from where we’re at the moment.

“We have to use the pain we are feeling at the moment.”