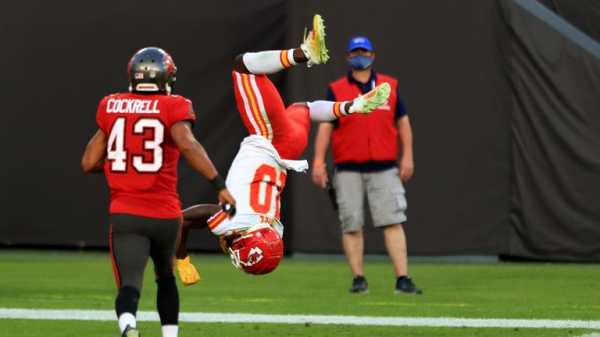 A look back at the action and talking points from Week 12 of the NFL season.

Anthony Lynn and the Los Angeles Chargers came up short yet again, Kirk Cousins continued his fine run of form, Derek Carr had a day to forget and the Denver Broncos discovered that life without a quarterback is no fun; here’s a look at what we learned in Week 12.

Key figures Raheem Mostert, Deebo Samuel and Richard Sherman all saw playing time on Sunday and, not just that, all had a huge impact in San Francisco’s upset win over the Rams.

Mostert ran in a first-quarter touchdown, though he and Jeff Wilson – another returning RB – did also cough up a couple of fumbles; Samuel led the team with 11 catches – eight more than anyone else – for 133 yards; Sherman caught one of two interceptions thrown by L.A. quarterback Jared Goff, with the other returned for a touchdown by rookie Javon Kinlaw.

The 49ers are now 5-6 on the season, only two games back from the Rams (7-4) and one on the Arizona Cardinals (6-5), as they look to stay alive in both their loaded division and in the NFC Wild Card race. Don’t sleep on the defending conference champs. David Currie

Stephon Gilmore managed to blanket DeAndre Hopkins for much of the contest, as he caught five passes for just 55 yards. There wasn’t much production from Hopkins’ supporting cast either as Murray threw for just 170 yards and an interception. Adam Butler typified the effort from the Patriots defense as he finished with five tackles, three quarterback hits and a sack. Sonny Cohen

Cousins was able to spread the ball around, with four receivers hauling in seven receptions. Rookie Justin Jefferson continued to tear up the league, collecting two more touchdowns. He became just the sixth rookie since 1950 with over 850 receiving yards and five or more touchdowns in their first 11 career games.

There should also be a special mention to Panthers rookie Jeremy Chinn, who became the second player in NFL history with two fumble return touchdowns in a single game. It was made even more impressive by both touchdowns coming on consecutive plays from scrimmage. Sonny Cohen

Up next – Panthers BYE WEEK; Vikings vs Jaguars (Sunday, 6pm) 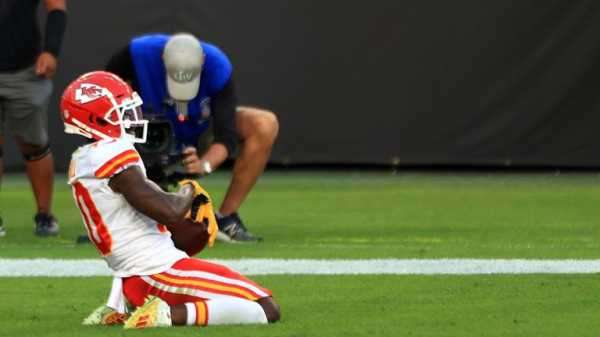 1:37 Tyreek Hill got seven receptions for 203 yards and two touchdowns in the first quarter against the Buccaneers.

That’s three defeats from their last four games for the Bucs and the whispers grow louder, whether it’s Bruce Arians, Tom Brady or a combination of the two.

At 7-5, the Bucs are still in the playoff mix but are watching the New Orleans Saints (9-2) disappear over the hill in the NFC South. But enough of the negatives, the Chiefs and Patrick Mahomes were at it again.

The scoreline ended up close, and the Bucs deserve credit for that but Mahomes was majestic again, throwing for 462 yards and three touchdowns, all of them to Tyreek Hill who had a career day (13 catches, 269 yards and three TDs).

If those numbers look amazing, the first quarter along is a reminder of what the Chiefs can do in quickfire fashion as Mahomes and Hill combined for 203 yards, 2 TDs and a 17-0 lead within the first 15 minutes! Paul Prenderville

Up Next – Chiefs v Broncos (Monday, 1.20am), Buccaneers BYE WEEK

First of all, huge credit must go to Kendall Hinton, the practice squad wide receiver who took on the responsibility under center in the absence of Drew Lock, Brett Rypien, Blake Bortles and Jeff Driskel. His day ended a sorry one of nine for 13 yards and two interceptions, but the kid has guts.

As the Saints and Latavius Murray ran riot, it proved a warning of the impact COVID can have to the quality of play in the NFL. Though it may seem fun at first, nobody wants to see a team play without a quarterback, which brings up the argument as to whether or not the game should have been played. With that in mind, it was perhaps the biggest reminder to date of where the NFL stands in regards to its desire to finish a full season. Cameron Hogwood

The Falcons are 4-2 since firing Dan Quinn with Raheem Morris at the helm but it’s hard to know whether this is a one-off blip for Raiders, much will depend on how Derek Carr recovers from a nightmare display that featured a pick-six and three lost fumbles.

Carr has been a polarising figure during his career but this performance had not been coming. In an impressive season he had gone toe-to-toe with Patrick Mahomes and the Chiefs last week, having been the only team to have beaten them earlier in the season.

It’s worth pointing out that Chiefs’ win in Week 5 came after their only back-to-back defeats so far, Jon Gruden will hope for another reaction with the winless New York Jets up next. Paul Prenderville 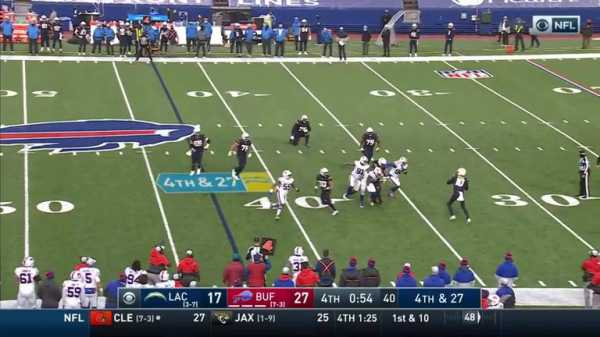 Barring Adam Gase in New York, we’re beginning to run out of obvious choices for the conversation surrounding under-pressure head coaches. How about Anthony Lynn? Under pressure may be drastic, but he finds himself incredibly fortunate to have a rookie quarterback in Justin Herbert whose outstanding debut year is just about saving the face of a massively under-performing team.

The Chargers were downed by the Bills on Sunday in a game again entailing some head-scratching decisions, highlighted on the final drive of the game.

Herbert had just miraculously connected with Tyron Johnson for 55 yards to convert on fourth-and-27 with 24 seconds on the clock to set the Chargers up at the two-yard line. Trailing by two scores and with zero timeouts, the Chargers opted to run the ball with Austin Ekeler, who made just one yard, rather than spiking the ball to stop the clock. What?

The questions are beginning pile up for coach Lynn. This team has too much talent to be 3-8. Cameron Hogwood 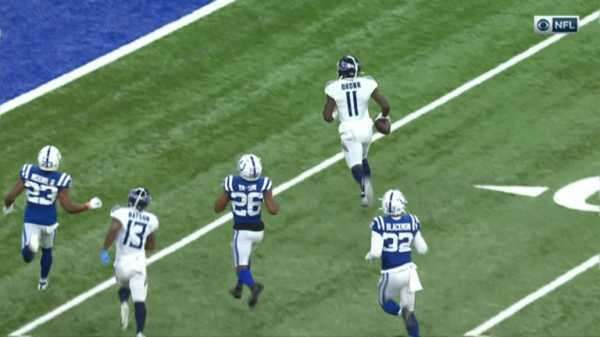 The run-up to Christmas and the climax of the NFL season guarantees you one thing, the sight of Derrick Henry pounding opposition defenses into oblivion.

The Colts were his latest victim, suffering to the tune of three first-half touchdowns, and he might well even claim an assist on Ryan Tannehill’s rushing TD that saw Tennessee head into half-time with a massive 35-14 lead! Tannehill sold the dummy to Henry, the defense bought it – because, why wouldn’t you? – and then the Titans QB ran untouched into the endzone.

The visitors very much eased off the throttle in the second half, scoring only a field goal until A.J. Brown added a bit of extra gloss near the end by returning Indianapolis’ onside kick attempt for a touchdown. Titans take hold of the AFC South. David Currie

The rollercoaster nature of the game was highlighted by Baker Mayfield missing a wide open Rashard Higgins just five yards from the end zone. According to NFL NextGen Stats, there was an 86 percent chance of scoring on the play. However, Mayfield, backed up by a big night for Nick Chubb, was able to pull off some impressive plays.

Though Jacksonville put up a real fight, led by rookie sensation James Robinson, their 1-10 record was enough for general manager Dave Caldwell to be fired. Sonny Cohen 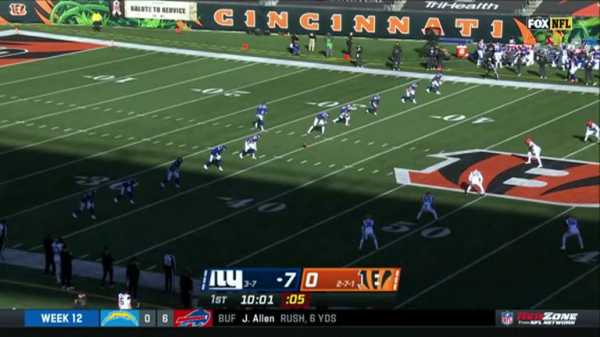 Don’t be surprised to hear that the Giants are fielding calls for defensive coordinator Patrick Graham come the offseason.

Miami Dolphins head coach Brian Flores was reluctant to let Graham go earlier this year, and for good reason. He has turned this Giants defense into one of the best-performing units in the league on the back of a 2019 season in which the team struggled to adapt to James Bettcher’s complex scheme.

Graham’s system has complemented the box-tackling strengths of star safety Jabill Peppers perfectly, as you suspect it will for rookie Xavier McKinney in the long-term. He has put cornerback James Bradberry in a position to shine in a talent-lacking secondary, exploited the versatility of Logan Ryan to make him look one of the bargain acquisitions of the summer, given tackling-machine Blake Martinez license to fly and unearthed a legitimate pass-rusher in Leonard Williams.

What will please head coach Joe Judge more than anything is that Graham has this defense playing the hard-hitting brand of football Giants fans have been desperate for in recent years. Cameron Hogwood

Credit for that goes to Miami head coach Brian Flores who has turned this team into more than the sum of their parts thanks to good coaching, good drafting, good free agency moves and a well thought through plan alongside general manager Chris Grier.

At the start of the season, you’d have been hard pushed to pick who would pick up the most wins between these two teams, that the Dolphins have allowed just three points in the two games tells you where both teams are.

The Jets, hopelessly drifting towards just the third winless season since the merger could do a lot worse than look at how the Dolphins approaching things a couple of years ago when a plan that is now paying dividends was cooked up. Paul Prenderville 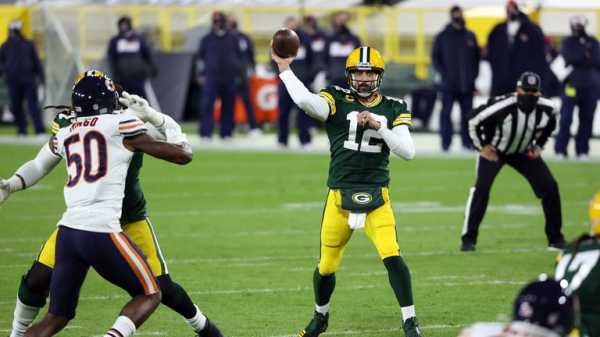 Mitch Trubisky’s redemption, this was not.

The returning Bears QB completed just 26 of his 46 pass attempts for 242 yards, throwing three touchdowns, two interceptions and losing a fumble, all the while being thoroughly outgunned and outplayed by the future Hall of Famer under center for Green Bay.

Aaron Rodgers was at his brilliant best in throwing four touchdowns to see the Packers cruise to a 41-10 lead by the end of the third quarter. In the fourth, Trubisky recorded 103 of his passing yards of two of his scores that count as nothing more than scant consolation in Chicago’s desperate playoff push and his efforts to keep his job. David Currie