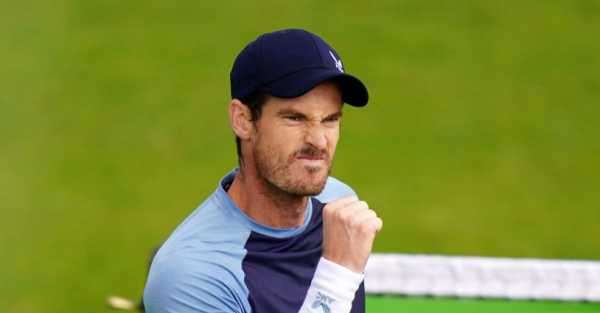 Andy Murray started his grass-court campaign with a routine 6-2 6-1 victory over Jurij Rodionov on his return to Surbiton Racket & Fitness Club.

Murray had played in the ATP Challenger Tour event back in 2004 but a lot has happened in the ensuing 18 years for the double Wimbledon champion, two-time Olympic gold medallist and former world number one.

It was the 35-year-old’s first match on grass since his All England Club exit to Denis Shapovalov last July and while last summer he was only able to play five matches on the surface, the Surbiton Trophy is set to be one of three tournaments he plays in ahead of this year’s trip to SW19.

A two-hour delay to proceedings occurred due to rain but when the light shower eased off, the crowd were treated to some vintage Murray tennis with an array of winners, drop shots and trademark ‘come on’ shouts in 58 minutes of play.

He had elected to skip the French Open to begin his preparations for Wimbledon early and received a rousing reception from those inside the 604-seater Centre Court.

It did not take long for the Scot to make his mark with an ace first up and Murray was able to break Rodionov in the fourth game following a superb backhand crosscourt winner.

In his first match in almost four weeks, the three-time grand slam winner showed no signs of rustiness and clinched a second break soon after to wrap up the first set in 28 minutes.

With Chelsea midfielder and tennis fan Ruben Loftus-Cheek among those in attendance, Murray’s confidence on the grass showed at the start of the second set with an excellent lob securing a break early on.

Rodionov, who has already won two Challenger events this year, did play his part in an entertaining first-round tie with a handful of impressive winners himself.

An important hold by Murray in the fifth game from deuce maintained his advantage and with the heavens ready to open again, a crucial second break went the way of the top seed.

It allowed the Briton to serve for the match which he duly did to begin his latest season on grass in typically emphatic fashion.

Despite the low-level status of the tournament, Murray admitted to nerves before his first appearance of the year in England.

He added: “I’ve trained well since the Madrid Open, I’ve got a lot of time on the grass but always a little bit nervous coming out to play the first match on a new surface.

“Even though I played in Madrid, I haven’t competed much in the last few months. But I thought I played well. I approached the match in the right way, attitude was fantastic and tennis was good.”

With rain returning within minutes of Murray’s victory, it meant the rest of the day’s play had to be called off and the all-British first-round match between Liam Broady and Jay Clarke will now take place on Tuesday.

Elsewhere, the women’s main draw is set to get under way on the third official day of the ITF Women’s Tour tournament and 15-year-old Briton Isabelle Lacy will feature after she beat compatriot Danielle Daley 6-2 3-6 10-7 impressively in the final round of qualifying.

Harriet Dart is seeded fifth at Surbiton and Jodie Burrage will take on third seed Lin Zhu in the first round.

Wild cards were handed to British pair Sonay Kartal and Yuriko Lily Miyazaki, who have been drawn against each other at the south-west London event that was unable to take place in 2020 or 2021.