Alexis Sanchez’s first goal for Manchester United wrapped up a 2-0 victory against Huddersfield on a day when the clubs came together to remember those who lost their lives in the Munich air disaster.

Tuesday is the 60th anniversary of the tragedy which claimed 23 lives, including eight of the players, as Sir Matt Busby’s side returned from a European Cup match at Red Star Belgrade. 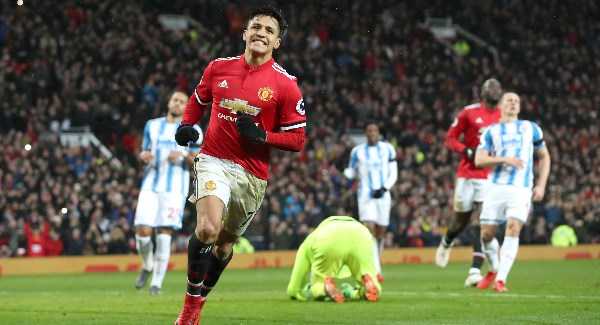 Silence fell upon Old Trafford as those lost were remembered ahead of a match that United won, with goals from Romelu Lukaku and home debutant Sanchez sealing the victory against David Wagner’s Terriers.

Huddersfield struggled to create clear-cut chances in their first league trip to Old Trafford since March 1972 but dug deep in the first half to frustrate the hosts, who claimed a penalty when Terence Kongolo poleaxed Scott McTominay.

United were struggling for a creative spark but went up a gear after half-time, going ahead within 10 minutes of the restart when Lukaku smartly turned home a Juan Mata cross.

Sanchez won a penalty and saw it saved, only to turn home the rebound on his Old Trafford debut as United bounced back from the midweek loss at Tottenham, extending Huddersfield’s winless Premier League run to an eighth match.

United showed spirit to break down the visitors on a day when the club remembered those killed so tragically in 1958.

Hundreds of fans congregated under the Munich plaque to pay their respects outside Old Trafford. When inside, they received a commemorative pack containing a book telling the story of the disaster along with a complimentary programme and letter from Ed Woodward.

“(Munich) is forever woven into the fabric of this club’s history,” the executive vice-chairman wrote in a letter to fans who impeccably observed a minute’s silence.

United started the match on the front foot and Jesse Lingard was soon racing through, only to fire straight at Jonas Lossl. Chris Smalling got away a tame header as the Terriers continued to be starved of possession.

Town’s players were making their presence felt, though, and the Old Trafford faithful were up in arms as not only was McTominay forcibly bundled over by Kongolo but referee Stuart Attwell did not point to the spot.

Town fans were also growing irritated with the officials, but Philip Billing was walking a fine line with some of his challenges – and Rajiv van La Parra embarrassed himself by miraculously returning to his feet having feigned injury.

Sanchez went down in the box claiming a penalty shortly after Lossl denied him a fine goal from the edge of the box, but United were lacking a spark and Huddersfield were only creating half-chances in a goalless first half.

Mourinho did not make any half-time changes, but his players immediately looked sharper. 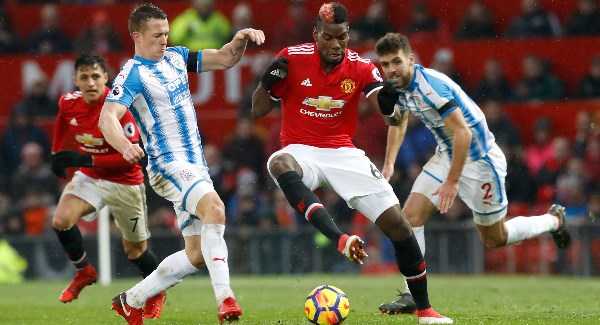 New boy Sanchez wriggled free to get away a close-range shot blocked superbly by Tommy Smith and their intent bore fruit in the 55th minute.

United battled to win possession in Huddersfield’s half and the ball was swiftly played wide for Mata to whip in a cross steered home smartly by Lukaku.

Paul Pogba came on as Mourinho’s Reds looked to add another, with substitute Michael Hefele soon gifting them that chance by clumsily bringing down Sanchez.

Lossl saved the resulting spot-kick, but the Chilean was not to be denied a first United goal as he slotted in the rebound.

Lukaku and Pogba had chances to compound matters as the rain fell, although Town were showing the odd glimpse of attacking intent as the match came to a close.