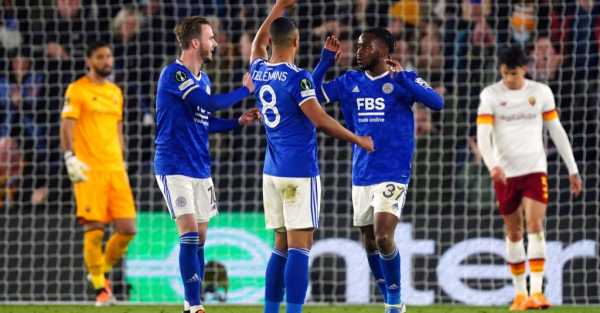 Ademola Lookman kept Leicester dreaming in Europe after a gutsy draw with Roma.

The striker’s ninth goal of the season will send the Foxes to the Stadio Olimpico for their Europa Conference League semi-final second leg next week locked at 1-1.

Brendan Rodgers’ side gave themselves a fighting chance in Italy after a spirited display, despite Lorenzo Pellegrini’s first-half opener.

They bossed Roma for long spells and will feel they can reach next month’s final in Tirana.

However, Leicester will be frustrated with a draw having started well, only to let their guard down once in the first half.

Jamie Vardy’s 19-minute cameo in Saturday’s 0-0 draw with Aston Villa allowed him to stretch his legs and his threat was evident inside the first two minutes.

Chris Smalling slipped under pressure from the striker, forcing Gianluca Mancini to clear behind the first of a flurry of Leicester corners.

From one, a stretching Timothy Castagne headed wide at the far post but Leicester’s bright opening was halted when Roma grabbed the lead after 15 minutes.

Nicolo Zaniolo’s crossfield pass found Nicola Zalewski and he was allowed to run unchallenged and slip in Pellegrini.

The captain had darted behind Wesley Fofana and, with Youri Tielemans failing to track him, fired his fourth goal in eight European matches this season through Kasper Schmeichel’s legs.

The Foxes lost Castagne, replaced by James Justin, to injury soon after and they briefly lost their way as Roma grew into the contest.

Yet the Foxes rediscovered their bite and Lookman twice stretched the visitors. First, Smalling expertly blocked Lookman’s shot before coming to the rescue of Rui Patricio after 34 minutes.

Lookman, this time on the edge of the area, again found space with Patricio parrying his drive and the goalkeeper needed Smalling to quickly clear ahead of a lurking Vardy.

Maddison curled over five minutes before the break and the theme continued in the second half with Lookman completely miscuing a header over from six yards.

But the on-loan RB Leipzig forward had been the Foxes biggest threat and Roma’s resolve finally broke after 67 minutes.

Substitute Harvey Barnes made an instant impact as Roger Ibanez tried to cut out his pass into the area, only to play the ball straight back to the winger.

Barnes took full advantage and crossed for Lookman to bundle in from close range.

Buoyant Leicester looked for a second and Kelechi Iheanacho headed over under pressure while Maddison ramped up his influence.

The Foxes – by far the better side – kept their cool as they searched for openings and Patricio needed to turn Iheanacho’s curling effort wide after Tielemans robbed Bryan Cristante.

Yet they were almost undone with 10 minutes left after brilliant footwork and strength from Tammy Abraham teed up Sergio Oliveira and Schmeichel turned his effort behind.