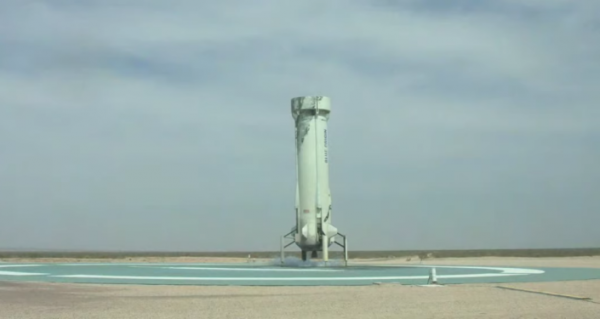 With NASA’s Space Shuttle program gone for nearly a decade, a slew of private firms have stepped up their efforts to provide manned space flight capabilities, not just for US governmental needs, but also for space tourism.

In a Wednesday test described by the company as an “astronaut rehearsal,” Blue Origin successfully blasted a New Shepard rocket into suborbital space and then landed the vehicle back on planet Earth in an upright position.

Blue Origin streamed the entire event on its YouTube channel.

​The capsule was crewed only by an anthropomorphic test dummy nicknamed “Mannequin Skywalker” and about 25,000 postcards mailed in by students, according to Space News.

“We’re getting so close to flying people here at Blue Origin,” Cornell added. “You can almost taste it.”

Founded in 2000, Blue Origin is Amazon CEO Jeff Bezos’ private space flight company, which aims to send paying customers into space for either commercial or tourism purposes. The company also works with the US space and defense industries. On Monday, the Defense Advanced Research Projects Agency (DARPA) announced it had selected Blue Origin to work alongside General Atomics and Lockheed Martin in developing a nuclear-powered spacecraft.

Another competitor, Virgin Galactic, recently unveiled its third suborbital space plane, the VSS Imagine, which is expected to ferry paying customers into space after blasting off from a high altitude “mothership.” Of the three, only SpaceX has transported humans into space, on board a Falcon 9 rocket.