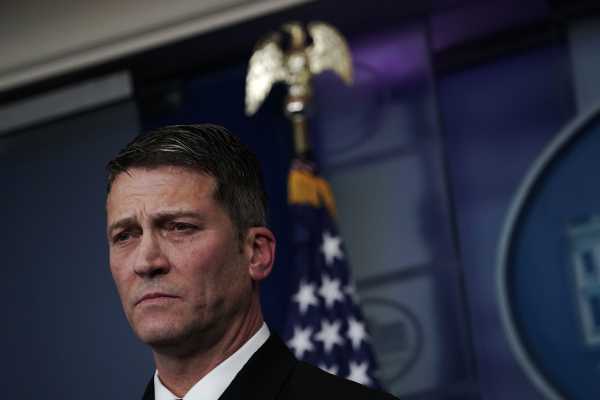 On Tuesday, Dr. Ronny Jackson, Donald Trump’s physician, told the world that the president “has absolutely no cognitive or mental issues whatsoever.”

He came to this conclusion, he said, after meeting regularly with Trump and from the president’s perfect score of 30 out of 30 on the Montreal Cognitive Assessment conducted during his physical exam on Friday.

The Montreal Cognitive Assessment, or MoCa, is a tool designed to spot the symptoms of dementia that come with a neurodegenerative disease like Alzheimer’s or Parkinson’s. According to Jackson, Trump requested a cognitive test during his annual physical, and is the first president to have undergone one.

To the able-minded, some of the questions might look overly simple or silly. It asks, for instance, for the patient to identify the names of a few animals, and correctly state their date and location. It has basic tasks like counting backwards by seven, and drawing a clock that reads 10 past 11. These are some of the basic mental processes that tragically slip away from people with dementia. (See the whole test here).

It’s a pretty useful tool to quickly assess dementia symptoms, or to assess cognitive functioning after a stroke. A 2007 study in the Canadian Journal of Psychiatry found the Montreal Cognitive Assessment correctly detected 94 percent of patients with mild cognitive impairment, performing better than another test of cognitive wherewithal. It’s been shown to be helpful in identifying symptoms in Parkinson’s patients, and in those who have suffered a stroke.

So that’s what the test does. What it does not assess is just as important. It doesn’t assess personality or judgment, as the Canadian Press reports. It’s not designed to tell us if someone is fit to be president of the United States.

It’s also not the only, or necessarily best, way to assess cognitive decline. Other tests recommended by the Alzheimer’s Association take into account information from family members who can report whether the person’s cognitive ability has been deteriorating over time. “There is no single cognition assessment tool that is considered to be the gold standard,” the Alzheimer Association reports in its guidelines for physicians. The Alzheimer Association does highlight three tests most suitable for quick assessment (read more about those here), and the MoCa is not among them (a few limitations being that it takes longer than five minutes to administer, and its a relatively new tool for the field.)

The MoCa is easy to ridicule, as many on the left are doing. It’s also odd to boast about (see Donald Trump Jr’s tweet below.)

But all information is useful. And so is the result of this test, in a small way.

Journalists and mental health professionals have argued, publicly, that Trump’s apparent deterioration of vocabulary over the past decades is a sign of cognitive decline. It’s important to know that Trump does not have signs of dementia so obvious to register on this test.

During the press conference where Jackson explained the results, CNN’s Sanjay Gupta (a medical doctor) did point out that the test cannot always find the earliest stages of dementia, like personality or mood changes.

As Richard Friedman, a professor of clinical psychiatry and director of psychopharmacology clinic at Weill Cornell Medical College, has argued in the Washington Post, we don’t need a test to judge Trump’s fitness for office: “The most accurate measure of a person’s fitness, whether mental or physical, is observable function in the real world — not the results of a fancy test or expert opinion. The fact is that Americans already have all the data they need to judge Trump’s fitness.”