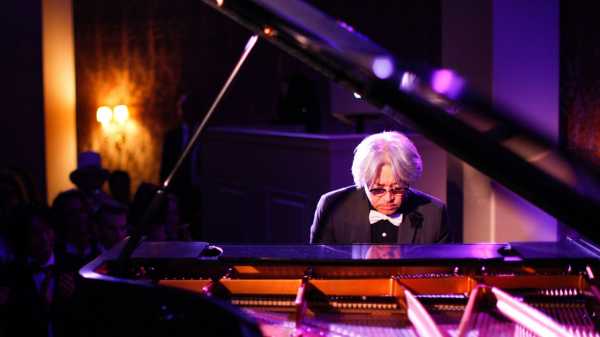 In 2014, the Japanese composer Ryuichi Sakamoto was diagnosed with
throat cancer. He survived and, last year, released “async,” a spare,
meditative album that evokes, with stealthy, almost casual force, the
beauty and mystery of life and death. In the United States, Sakamoto is
best known for his soundtrack work (“The Sheltering Sky,” “The Last
Emperor,” “The Revenant”). He’s also a ludicrously eclectic musician who
has collaborated with Iggy Pop, fronted a synth-pop band (the
extraordinary Yellow Magic Orchestra), and released albums of jazzy,
sentimental piano tunes (among them the beloved theme to the film “Merry
Christmas, Mr. Lawrence,” starring David Bowie, in which Sakamoto also
acted). The songs on “async” explore Sakamoto’s whole range. There are
piano ballads, spoken-word recitations, synth jams, and atonal pizzicato
experiments. On one song, David Sylvian recites a poem by Arseny
Tarkovsky, the father of Andrei, who directed “Stalker” and “Solaris,”
among other films; in his liner notes, Sakamoto describes “async” as “a
soundtrack for an Andrei Tarkovsky film that does not exist.” All these
ways of describing Sakamoto and “async” are accurate—but they fail to
capture the evasive, singular vibe of his music. There’s
something about his signature mix of avant-garde chill and sentimental
tenderness that’s tremendously moving. Sometimes, the music on “async”
is lambent, beautiful, and obvious; at other moments, it’s ugly,
forbidding, and even terrifying. In that combination of tones,
Sakamoto’s three-dimensional individuality becomes visible. —Joshua Rothman

The feisty Bronx rapper Cardi B bewildered the pop world last year, as an
adult entertainer turned reality star who managed to fashion a third
career in rap. Her single “Bodak Yellow” tore up the Billboard charts
like a Bronx-bound 6 train, landing her features with Migos, G-Eazy, and,
now, Bruno Mars, who tapped her for the remix of his recent single
“Finesse,” a Bell Biv DeVoe homage. The twenty-five-year-old has plenty
of untapped star power: she’s hilarious, infectious, gorgeous, and has
an unusual way with words. But she uses a lot of bad ones, which, for a
collaboration with an artist like, say, Bruno Mars, may seem awkward.
There are fans who love Cardi for her rawness, but I always worried that
her rougher edges might hinder her commercial appeal. Nicki Minaj
enjoyed huge success (and earnings) with crossover hits like “Your
Love” and “Super Bass,” two of her best songs. Listening to Cardi B, I
always wondered what a similarly PG version of her music would sound
like, and how far it could take her. On “Finesse (Remix),”
Cardi hops easily into a vintage New Jack flow, channelling Heavy D and Monie Love with breezy ease. Every
line lands: she’s coy, playful, adventurous with ad-libs, and still
finds time to make it clear she used to work for dollar bills as a
stripper. Her verse is near-squeaky clean, ready for mainstay rotation
on the radio stations and retail playlists Bruno Mars calls home. (“My
big fat ass got all them boys hooked” is almost too good to bleep.) Mars
is having just as much fun, a stage kid, fluent in all eras of pop, whose
voice wears nineties R. & B. riffs as well as he wears Reebok Pumps. The
nostalgia is heavy, and risky: whenever you tap a beloved era, there’s a
danger of putting off purists who were there the first time around. But
“Finesse (Remix)” works so well because it sounds exhaustively
authentic: plucked from a time that people remember as simpler but might’ve
just been less uncut.—Matthew Trammell

Franz Schubert has traditionally been thought of as the ultimate
Viennese composer, an artist who captured the city’s sweet-sad soul in a
lovely, placid Biedermeier bottle. (It was left to the tempestuous
Gustav Mahler, some seven decades hence, to finally smash the glass.) If
his music, potent but steeped in resignation, matches any season, it
would be autumn. But an exciting new recording of Schubert’s beloved
“Trout” Quintet (on Deutsche Grammophon), headlined by the violinist
Anne-Sophie Mutter and the pianist Daniil Trifonov, is a perfect album
to chase the winter doldrums away. Sometimes, superstar chamber-music
sessions can give the principals—in this case, Mutter and Trifonov—too
much sway. Their dual interpretation, notable for its bristling textures
and occasional breakneck speeds, can sometimes seem like a Russo-German
pincer movement designed to squeeze the cozy Austrian spirit of gemütlichkeit out of the way. In one of the album’s extras, a
violin-and-piano arrangement of the song “Ständchen” (“Serenade”), from
Schubert’s final cycle, “Schwanengesang,” Mutter’s liking for expressive
extremes goes too far: it’s a psychologically souped-up reading that
belongs, if anywhere, to the café-music world of “The Third Man.” But in
the “Trout” itself, Mutter and Trifonov give three of Mutter’s talented
protégés—Hwayoon Lee, Maximilian Hornung, and Roman Patkolo, on viola,
cello, and bass, respectively—just enough room to make their own marks. The album
cover, in which Mutter, clad in a stunning red dress with train,
stretches out like a mermaid on a chaise longue, adds cheekily to the
aquatic theme. —Russell Platt

In search of new music? Browse The New Yorker Recommends to discover more cultural recommendations from our staff.