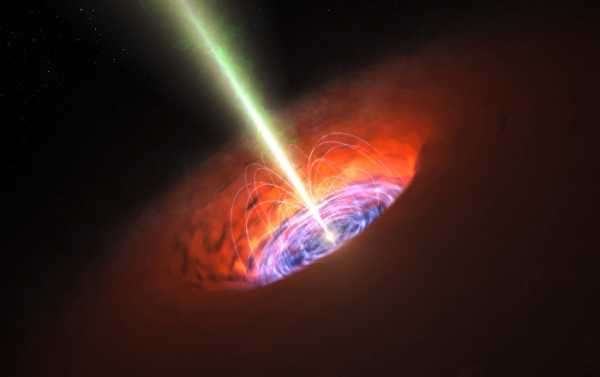 The researchers say their study hasn’t brought humanity any closer to extracting energy from black holes, but noted that future generations could build a structure that may produce limitless energy using them.

An international team of scientists has found an answer to a question that has troubled scientists for more than half a century – can a rotating black hole be used as a source of energy? According to a study, which was recently published in the journal Nature Physics, the answer is yes.

In 1969, British mathematical physicist Roger Penrose proposed a method known as the Penrose process, detailing how energy can be extracted from rotating black holes, which pull the surrounding space and time. Penrose suggested that if an object or light were to fall into a rotating black hole’s ergosphere, it would be split into two parts – one that would be sucked into it and another that would escape. When fleeing, it would gain energy from the black hole’s rotation. Thus, by sending objects or light towards a rotating black hole, one could get energy back, Penrose suggested.

In 1971, two years after Penrose came up with his hypothesis, Soviet physicist Yakov Zeldovich suggested a potential method to test it. Zeldovich proposed to substitute a rotating black hole with a cylinder made from a material that can absorb energy. The scientist believed that light waves would be amplified by the cylinder and extract energy. However, in order to become amplified, the light waves would need to be twisted into spirals.

The idea was that the frequency of twisted light waves would change after they hit the cylinder as a result of the Doppler effect, the change in a wave’s frequency in relation to an observer who is moving towards the source of the wave. Most of us have experienced this on the street when hearing a police or ambulance siren – when the vehicle moves towards us, the siren has a higher pitch than when it moves away from us.

Although Zeldovich came up with a good way to test his colleague’s hypothesis, it nevertheless had a big flaw – the speed at which cylinder has to move in order to amplify light waves needs to be so tremendous that it is mechanically impossible.

This is where scientists from the University of Glasgow and the University of Arizona stepped in. Instead of using light waves, they decided to use sound waves, which travel “roughly a million times slower”, meaning that the cylinder doesn’t have to rotate as fast.

The researchers say the fact that they confirmed Penrose’s theory doesn’t bring humanity any closer to extracting energy from rotating black holes. At the same time, they say that it doesn’t mean that future generations won’t be able to build some sort of structure around rotating black holes that could produce unlimited energy.