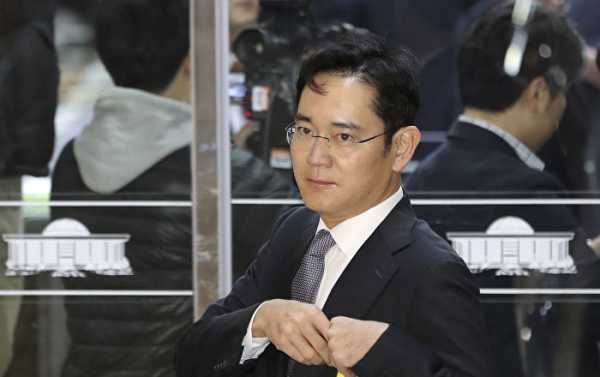 TOKYO, (Sputnik) – Samsung Vice Chairman Lee Jae-yong has been released from prison after an appeals court in Seoul suspended his bribery sentence. His sentence was reduced to two and a half years, and Lee was released on four-years’ probation, according to local media.

“I apologize for disappointing everyone. The past year has been a time for me to look back on myself. I will take more caution and do better,” Lee said, leaving the court after the verdict.

Lee Jae-yong, Samsung Electronics Vice Chairman, has been set free with a suspended prison sentence nearly a year after he was imprisoned on corruption charges.

On August 25, a court found Lee guilty of embezzlement, bribery and perjury and sentenced him to five years in jail. The prosecution demanded a 12-year sentence for Samsung’s vice chairman. Lee has not pleaded guilty to the charges brought against him, and later in August, appealed the court’s decision.

Samsung’s de facto leader was arrested on February 17, 2017, over several accusations including giving a $6.38-million bribe for the equestrian training of the daughter of former South Korean President Park Geun-hye’s friend.

The scandal involving Park and her longtime friend Choi Soon-sil broke out in October 2016. Park was charged with forcing major corporations, including Samsung, to donate to foundations controlled by Choi, taking bribes, and to sign contracts beneficial for Choi and her associates. Park had to leave her office over the case in March 2017.

Lee took charge of the company after his father, Samsung Group chairman Lee Kun-hee, left the business after a heart attack in 2014.