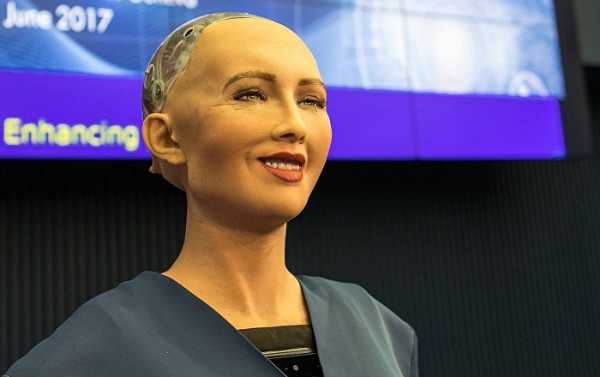 Due to the development of artificial intelligence systems, humanity could be on the threshold of a fourth industrial revolution. Although fully functional robots walking down the streets and self-driving cars flying above them is still a scenario of a distant future.

Robots are rapidly becoming smarter, as they are effectively self-learning, supported by large data and artificial neural networks.

Robotics has already affected the labor market, relieving people of monotonous and primitive jobs, although for many it meant loss of income as well.

According to a gloomy forecast, by 2020 the world labor market will lose seven million vacancies. In the next 20 years about 35 percent of the world’s inhabitants will be cut off from their work.

However, the robots that we have today are imperfect, clumsy and their artificial brain risks failing at the most inopportune moments.

Supermarket owners in the Scottish capital Edinburgh hired a sales consultant – a robot named Fabio. It was instructed to help customers find products in different sections of the market.

Sadly, as an assistant, Fabio was absolutely useless because it could not assist the customers correctly. Those customers who were looking for a certain type of cheese and asked Fabio to tell them where to find it were simply sent to the dairy department.

Also, due to the noise in the store, Fabio could not recognize human speech properly and even ended up making totally inappropriate jokes.

The puzzled visitors started to avoid Fabio, and a week later, the robot was “fired” for being unfit for work.

Warehouse robots, on the other hand, are demonstrating astounding results. The warehouses belonging to the largest internet retailer Amazon employs over 100,000 robotic loaders globally.

People are still looking after them, but the effectiveness of joint work has increased five-fold.

A study by Deutsche Bank showed that Amazon robots spent 15 minutes on each order cycle, whereas, people needed 60-75 minutes for the same work. In addition, robotic warehouse systems reduced the corporation’s operating expenses by 20 percent.

Robotic security guards still need a lot of improvement to their functionality. Although many enterprises have patrol robots moving around the perimeter of their protected facilities, these robots are at risk of becoming disoriented.

In summer of 2017, robot security guard Knightscope K5 was entrusted with patrolling a business complex in Washington.

For a while, everything went smoothly, but one day the robot went straight to a fountain in the complex, fell into it and drowned.

Who knows, maybe the robo-guard just wanted to freshen up a bit after a long day?

Most experts believe that passenger transport without a driver is a matter of next 10-20 years. During this time, cars will learn how to operate in real conditions on the roads and all the technical and legal issues will be resolved.

Till then, however, self-driving cars are not ready to take over the roads, as a recent Tesla car crash demonstrated.

At the end of last month, a Tesla car was driving on autopilot when it crashed into a parked fire truck in Los Angeles. The Tesla Model S was moving at a speed of 105 kilometers per hour.

The company immediately stated that Tesla’s self-driving technology requires drivers to keep their hands on the steering wheel at all times. If the system feels that the hands have been removed, the driver is warned immediately. The company added that the autopilot is intended for use only with an attentive driver inside.

Despite the recent mishap, progress on self-driving technology is still futuristic and every failed attempt points to errors that can then be fixed, bringing humanity closer to one day driving fully automated cars.

Sophia, the creation of a Hong Kong company and is recognized as the most perfect android in the world, recently fell into a stupor.

The robot became famous for its ability to discuss and analyze a wide range of topics; once Sofia even shocked many by admitting that she is ready to destroy humanity.

She was invited to the recent World Economic Forum in Davos where a journalist of the Ukrainian TV channel asked her how to fight corruption in Ukraine and around the world. Sophia went into deep thought, ceased to respond or react to anything.

This malfunction was later explained by specialists who said that Sophia was programmed to answer only certain prepared questions and the issue of corruption was not part of that list.

In Sophia’s defense, many humans might fall into a stupor if faced with such a broad question.

One way or another, robots will soon take over routine jobs such as cooking, manufacturing, commerce and accounting, according to authors of the book “The Second Machine Age”, written by researchers Erik Brynjolfsson and Andrew McAfee at the Massachusetts Institute of Technology.

However, total robot domination on a global scale which may result in the extermination of humanity remains a chapter out of a sci-fi book.