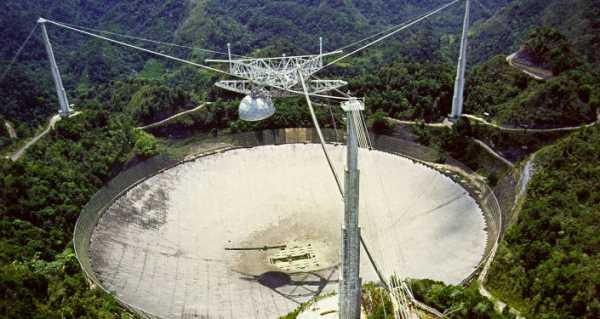 The US National Science Foundation (NSF) announced in mid-November that the scientific body would begin to decommission the radio telescope at Puerto Rico’s Arecibo Observatory over fears that recent damages would bring about the structure’s collapse.

Ahead of its controlled demolition, the iconic telescope collapsed in on itself overnight, officials revealed Tuesday. The telescope’s demise came after the observatory suffered two major cable malfunctions over the last couple of months.

At present, there have been no reported injuries. In early November, much of the area was cordoned off after a cable failure was detected by specialists.

“We are saddened by this situation but thankful that no one was hurt,” NSF Director Sethuraman Panchanathan said in a statement accompanying the release. The official added that the agency’s focus will also be on “finding ways to restore operations at other parts of the observatory, and working to continue supporting the scientific community, and the people of Puerto Rico.”

The Arecibo telescope’s demise became apparent earlier in August, when one of its many cables became unattached; however, officials became even more concerned when a second cable broke in early November. The NSF ultimately announced on November 19 that the structure would need to be decommissioned, noting that extensive damages would hinder a safe restabilization of the telescope.

The NSF’s decision was largely met with pushback from fans and officials within the scientific community, some of whom even launched a petition to stave off the planned demolition. As of Tuesday, the petition has collected nearly 37,000 signatures of its goal of 50,000.

“It was very difficult because yesterday there was a lot of sadness, a lot of regret and concerns,” Martorell said, explaining that in the days prior, officials at the site had found that more cables were breaking. “They were very nervous because they knew that at some point it could happen, but they did not want it to happen.”

The Arecibo instrument was the second-largest radio telescope in the world and was used to identify asteroids and pulsars in addition to detecting radio wave blasts from the cosmos. The observatory even managed to make a cameo in the 1995 spy film “GoldenEye.”