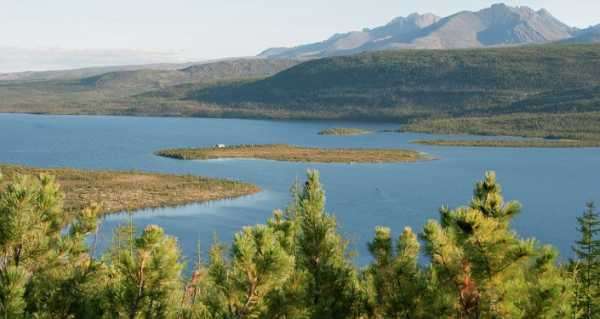 Waves and creases along the banks of Siberia’s Markha River appear to look more like stripes in recently published images, yet it remains unknown if the geological build-up is solely responsible for the weird pattern.

NASA researchers have unveiled what has been deemed as a quintessentially Siberian curiosity, posting a slew of satellite images of a remarkably wrinkled landscape in the vicinity of the Markha River in Arctic Siberia.

Captured with a Landsat 8 satellite over several years, the series of photos show the land on both sides of the Markha River creased with alternating dark and light stripes, irrespective of the season, although it becomes more obvious in winter when the whiteness of snow makes the contrast in the “texture” of the landscape much starker.

One of the suggested explanations for the phenomenon lies in inherent geological features. According to the space agency, this region of the Central Siberian Plateau is covered in permafrost for the lion’s share of the year, though it occasionally – albeit briefly – thaws.

Those stretches of land that repeatedly freeze, thaw, and freeze anew have been known to take on strange circular or stripy shapes, making the nearby ground peculiarly pattered, scientists reported in a study published in January 2003 in the journal Science. The pattern occurs when soils and stones sort themselves in a natural way during the freeze-melt intervals.

Another possible explanation is erosion, scientists believe. Thomas Crafford, a geologist with the US Geological Survey, told NASA that the stripes resemble a pattern in sedimentary rocks commonly referred to as layer cake geology. These patterns occur when melted snow or rain trickles downhill, cutting and flushing pieces of sedimentary rock into piles. The process can reveal slabs of sediment that resemble slices of a layer cake, Crafford explained, with the darker stripes representing steeper sretches of land while the lighter stripes point to flatter areas.

As follows from the images provided by NASA, this type of sedimentary layering stand out more during the cold season, when white snow stays on flatter areas longer, making them appear to be lighter. Crafford added though that this naturally crafted design fades in areas closer to the river, where sediment piles up more uniformly along the banks, and where increased erosion by water has been taking place for millions of years.