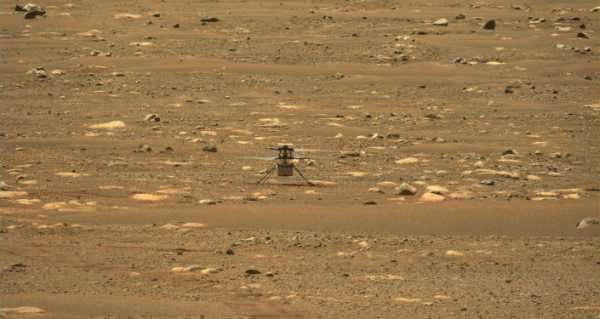 The challenge of the first flight on Mars was to generate enough lift in its sparse atmosphere, equivalent to flying 22 miles (35 km) above sea level on Earth. But the Red Planet’s weaker gravity, just over a third of ours, makes things easier.

NASA scientists have described the first flight of its Ingenuity drone helicopter on Mars as its “Wright Brothers” moment.

Orville and Wilbur Wright made the first powered, heavier-than-air aircraft flight of the Flyer biplane on December 17 1903, with Orville at the controls.

The Ingenuity helicopter lifted off from the surface of the Red Planet for a 39-second flight early on Monday morning, rising vertically and hovering before touching back down.

Flight on Mars is made challenging by its sparse atmosphere, having only 1.6 percent of the density of Earth’s, although the planet’s gravity is just over a third of ours. That is equivalent to flying 22 miles (35 kilometres) above sea level in our atmosphere — three times higher than any winged or rotary aircraft has ever flown.

The solar-powered vehicle uses an electric motor to drive a pair of two-bladed, contra-rotating rotors akin to the Russian Kamov design bureau’s helicopters.

In a statement, a ​NASA associate administrator for science, Thomas Zurbuchen, said the US space agency would name the plain where the drone lifted off after Wright Field in Kitty Hawk, North Carolina, the site of the brothers’ 12-second, 120-foot first flight.

“As an homage to the two innovative bicycle makers from Dayton, this first of many airfields on other worlds will now be known as Wright Brothers Field, in recognition of the ingenuity and innovation that continue to propel exploration.”

NASA was beaten to almost every first in space exploration history by the Soviet space programme, which launched the first satellite, Sputnik 1, in 1957, put the first animal in orbit — the dog Laika — the same year and made Yuri Gagarin the first cosmonaut in 1961. NASA restored its prestige in 1969, when Neil Armstrong became the first man to set foot on the moon.