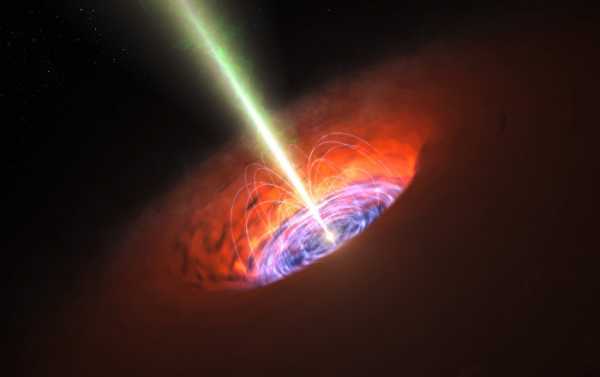 Although black holes are considered to be powerful weapons of destruction, there are reasons to believe it is not quite so, as a research team from Harvard University has assumed there’s another kind of a life-compatible scenario to be considered in our search for aliens: one that has planets orbiting a supermassive black hole, rather than a star.

Gigantic black holes are typically encircled by swirling disks of gas and dust called active galactic nuclei (AGN for short) that emit such overwhelming loads of radiation and light that many scientists assume these factors would ruin the atmosphere of all nearby planets creating “a dead zone” around the black hole. However, according to the study published in the Astrophysical Journal, the “dead zone” concept is not at all bleak.

In the search for “positives”, as the researchers referred to their goals speaking to Live Science, they created specially tailored models of AGNs that helped them identify “galactic Goldilocks zones” around black holes  – regions around them, analogous to stars, where the temperature pattern would be right for water to exist on orbiting planets.

If physically placed in those regions, a planet’s atmosphere would not suffer from any detrimental effects, while the AGN’s radiation could facilitate photosynthesis, typically occurring on Earth and break molecules into compounds capable of sustaining life, namely those essential for building proteins, lipids, and DNA.

Looking back at the previously stressed negative effects of ultraviolet and X-ray radiation around the black zones, the researchers assumed the negative nature of AGN had been a little exaggerated in past years. They drew parallels with bacteria on Earth and their naturally created protective biofilms, arguing that areas affected by ultraviolet radiation could have developed similar shields.

X-rays and gamma-rays, which are also typically spewed by AGN, are also believed to be easily absorbed by Earth-like atmospheric layers, while the damaging effects of AGN are not as far-reaching as it was previously assumed, “which is definitely surprising”, the scientists argued.

For instance, while earlier studies suggested the radiation of a black hole the size of the Milky Way’s Sagittarius A would destroy the atmosphere of any Earth-like planet within 3,200 light-years, they now think the damaging effect won’t cover more than a 100 light-year distance.