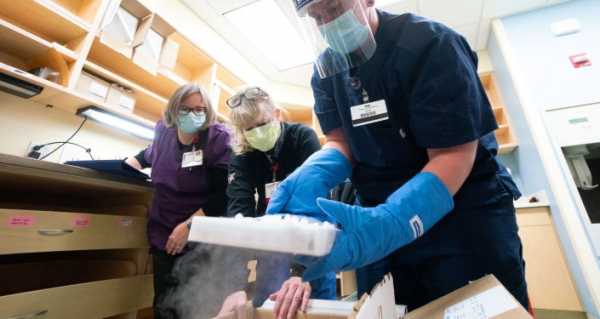 Last month, the European Medicines Agency – the EU agency tasked with evaluating and regulating medicinal products – said its networks had been breached, with hackers copying a trove of Covid-19 vaccine-related documents. On Friday, the agency claimed that, after being accessed, the documents were also “manipulated” before being leaked online.

Covid-19 vaccine-related documents accessed and copied from the EMA last month suggest that the agency appeared to have been pressured into approving the Pfizer-BioNTech vaccine as quickly as possible despite a range of concerns, Le Monde reports, after investigating files found on the dark web.

The files reportedly include 19 letters sent between 10 and 25 November by agency employees, including among them emails sent to multiple recipients (whose potential for manipulation is therefore deemed more difficult).

A second letter, dated, 19 November, features a senior EMA official describing a “rather tense,” “sometimes even unpleasant” conference call with European Commission officials which gave “an idea of what the EMA may face if expectations, realistic or not, are not met” on the timeframe for approval.

For the Pfizer-BioNTech preparation, the documents said these “problems” included a lack of inspections at manufacturing facilities, lack of data on commercial lots, “and most importantly, the fact that there are differences in quality between commercial batches and those used in clinical trials,” and in particular – a decrease in the integrity of its main active ingredient – RNA.

The latter issue, Le Monde says, was said to have “caused the greatest concern among researchers tasked with evaluating the vaccine’s quality,” with fears reportedly related not only to effectiveness, but to safety.

Pfizer and BioNTech reportedly responded to the EMA’s concerns in a report dated 26 November, with the review saying that inspections at production sites had begun, and proposing the creation of a 60-percent RNA minimum integrity rate, with one manufacturer saying differences in the amount of RNA “should not affect” the preparation’s effectiveness or safety.

Simon Stevens (R), Chief Executive of the NHS, watches as a nurse (C) administers a dose of the Pfizer-BioNTech Covid-19 vaccine to Frank Naderer (L), 82, at Guy’s Hospital in London on 8 December 2020 as the UK starts its biggest ever vaccination programme.

However, a document dated 30 November showing correspondence between the EMA and manufacturers suggested that the EMA was not entirely satisfied, saying “critical issues” needed to be addressed through a “stricter control strategy,” particularly “given the innovative nature of this type of product and limited experience” in handling it.

The Pfizer-BioNTech vaccine was approved by European regulators on 21 December, 2020, having already been permitted for use in the US and the UK earlier that month.

The Pfizer-BioNTech vaccine, sold to the EU for 15.50 euros per dose for 300 million doses, faced flak this week after Norway linked 13 deaths to side effects, and Dutch media reporting that about 100 people in the Netherlands had developed side effects of various severity after taking the preparation. Similar problems were reported in Belgium, Finland and Israel, with the latter country reporting partial facial paralysis among 13 Israelis jabbed by the shot.