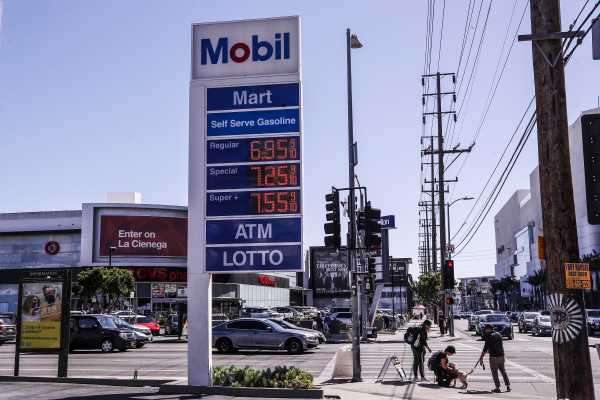 President Joe Biden announced Tuesday he intends to ban oil imports from Russia to target the “main artery” of the country’s economy, fossil fuels. But “the decision today is not without cost here at home,” he acknowledged. Namely, that gas prices, already climbing since Russia’s invasion of Ukraine, would continue to climb, and inflation along with them.

Right on cue, gas prices surged again Tuesday to a national average of $4.17 a gallon. To hit a historic high, gas prices still have a ways to go before beating the previous 2008 record of $5.37 (adjusted for inflation). But there’s a good chance they still haven’t hit their peak.

One of the major reasons gas prices are climbing is somewhat counterintuitive. The US is not a major consumer of Russian crude oil, which makes up less than 4 percent of US consumption, so banning imports shouldn’t have a huge effect; the US doesn’t import any Russian gas. The US can make up the oil gap with imports from other countries, and the Biden administration already is pursuing that path by opening talks with Venezuela. Nor is Russia all that reliant on the US, because US purchases account for about 9 percent of its exports.

The bigger impact on the price of oil comes from what Biden’s announcement portends. Global oil prices have been fluctuating wildly in recent days, reflecting that there is a wide range of uncertainty over what could happen next. One of the uncertainties is whether more countries will follow the US’s move to ban imports, taking Russian oil off the table for a number of foreign markets. Cutting out Russia makes oil more expensive, because it upends the existing network of pipelines and makes countries’ paths to getting oil longer and more expensive.

Biden’s announcement signals that surging gas prices are probably not going away soon, but beyond this year, energy prices will depend a lot more on what the US does to reduce oil dependency.

This week, global benchmark prices for oil rose to $130, only to fall back down to around $110, as of March 9. The volatility of the market reflects a huge range of uncertainties surrounding the fate of Russian oil.

Oil from Russia makes up 11 percent of the global oil supply and is a large portion of the oil economy. The rising prices reflect the growing risk that Russian oil may in one way or another be off the market in coming months. Russian President Vladimir Putin could respond to Western sanctions by withholding oil; there could be a physical disruption to European pipelines from war; or Russia may struggle to find buyers for its oil.

The market may have been overreacting to Biden’s announcement of an oil import ban, helping explain the wild swings in prices. In the next few weeks, what will affect prices more is how Europe and other parts of the world, like China, respond. European countries on average get more of their oil from Russia, and account for more than half of Russian oil exports, mostly shipped by pipelines. Should European allies like France and Germany follow suit and ban imports of Russian oil, it would have a much larger effect on gas prices. So far, only the UK announced an import ban on Russian oil this week, and it’s unclear yet whether more countries will take this step.

For now, the US is largely acting alone by sanctioning oil imports. But if Russian oil becomes unusable in more markets, one way or another, that will cause prices to climb. It throws a wrench into today’s supply chain for oil, from pipelines built to maximize shorter distances to refineries fine-tuned to process a specific grade of oil. “Everything is designed to be cheap,” explains Clark Williams-Derry, an energy analyst with the Institute for Energy Economics and Financial Analysis. But sanctioning Russian oil means “you’re replumbing the system. All of that costs money and takes time,” he added. “It’s more expensive because it’s less efficient.”

There are additional factors that could change what happens to the oil supply. The US is also discussing striking deals with Saudi Arabia and relaxing sanctions on Iran to encourage more oil production. No one can tell how all these factors will come together to affect gas prices, but uncertainty usually drives up the price. “We’re in an era of hyper-volatility. That volatility alone is enough to lift prices,” Williams-Derry said.

More oil infrastructure won’t help in the short term. The US can help consumers more in the long term by reducing oil demand.

Republicans, and some Democrats, in Congress have pitched increasing domestic oil production as the quick solution to high energy prices.

That won’t work, as I explained in a previous story. The oil market was already tight before the Russian crisis, because demand has risen faster than production since oil crashed early in the pandemic. This makes the short-term options pretty limited; boosting oil and gas production would require a massive influx of new infrastructure for fossil fuels.

Building new fossil fuel infrastructure is just not a short-term fix. “In the short term, the options available are basically limited to existing assets in the world,” said Trevor Houser, a co-author on a recent Rhodium Group report on reducing US energy dependence on Russia. “You just can’t build that much new stuff in six months before the next heating season kicks in.”

This hasn’t stopped lawmakers like Sen. Joe Manchin (D-WV) from calling for an “all of the above” energy strategy that boosts oil and gas as much as renewable energy. This kind of logic can boost US oil company profits, but doesn’t really help with any pain at the pump.

The best long-term counterweight to Putin’s influence in the global economy is to reduce the world’s reliance on fossil fuels, not enhance it. This is where the US has the most control to help consumers deal with energy bills, by addressing demand. Europe is more reliant on oil for heating households than the US, which uses more natural gas.

But the US can support efforts that encourage efficiency, like thermostat adjustments to conserve energy, and ramping up manufacturing for heat pumps to replace boilers. The US could also boost fuel efficiency standards, boost funding for electric cars and hybrids, and increase support for public transit to cut demand for oil. And energy efficiency upgrades for buildings, like installing more electric heat pumps, would help save money on heating bills for buildings that aren’t yet electrified.

On Tuesday, Biden noted a few of the ways his administration may seek to expand clean energy policies to help consumers hurting from gasoline prices. “Loosening environmental regulations or pulling back clean energy investment won’t lower energy prices for families,” he said. “But transforming our economy to run on electric vehicles powered by clean energy with tax credits to help American families winterize their homes and use less energy, that will help.”

All these policies are the most effective in the medium term, looking out to the next five to 10 years. That includes US investment in bringing newer technologies to scale, like clean hydrogen, sustainable aviation fuels, and long-duration electricity storage and advanced battery technology. “You have to start those investments now,” Rhodium’s Houser said. “While they’re effective in the medium term, they have to start now because it takes a while to build things.”

Looking past the immediate crisis, the best answer for expensive gas at the pump is the same set of policies that target climate pollution.

“If we do what we can, it will mean that no one has to worry about the price at the gas pump in the future,” Biden said Tuesday. “That’ll mean tyrants like Putin won’t be able to use fossil fuels as weapons against other nations.”