Mark Hall, a nurse practitioner who was diagnosed with monkeypox, says he isn't exactly sure who he contracted the disease from.

However, he found out he was exposed by someone a week before he started showing symptoms. That person, he says, knew they had monkeypox and didn't tell him.

Hall, a gay man living in New York City, said shame and stigma surrounding the virus have made some people afraid to come forward.

MORE: US has one of the highest levels of monkeypox in the world: CDC

"Whenever anybody gets sick — even if it's COVID — half the time, people don't want to tell because sometimes it feels like a moral failure," Hall told ABC News in an interview. "We've stigmatized these things in so many ways that if you get sick, that you somehow have failed morally. I think people are scared to admit that."

"It's a system problem rather than an individual problem," Hall added. 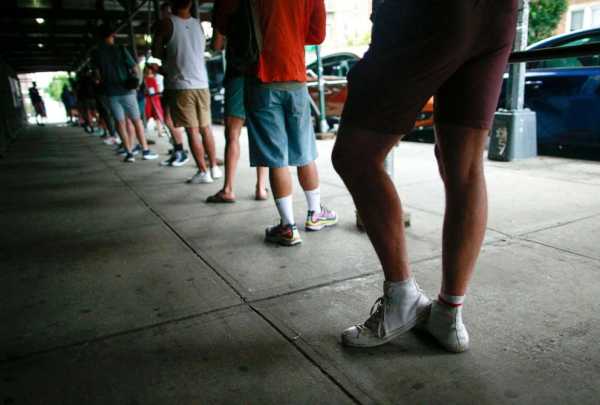 People wait in line to recieve the Monkeypox vaccine at the Bushwick Education Campus in Brooklyn on July 17, 2022, in New York City.Kena Betancur/AFP via Getty Images

Of the more than 18,000 confirmed monkeypox cases reported globally, in countries that don't usually have monkeypox researchers have found the vast majority are among gay, bisexual and other men who have sex with men.

In the U.S., the Centers for Disease Control and Prevention says that most known cases in the current outbreak are among people who identify as gay or bisexual, but that anyone can get it.

"Stigma and discrimination can be as dangerous as any virus," said WHO Director-General Tedros Adhanom Ghebreyesus at a press conference Saturday. "In addition to our recommendations to countries, I am also calling on civil society organizations, including those with experience in working with people living with HIV, to work with us on fighting stigma and discrimination."

The parallels between the failings of the HIV/AIDS crisis — including slow-moving action from the government and poor outreach that failed to contain the epidemic — were highlighted by monkeypox's growing impact on gay and bisexual people, activists say.

Prior to the outbreak, most cases occurred in countries where the virus is usually found or endemic — typically central and western Africa.

Monkeypox, a cousin of the smallpox virus, is generally a mild illness with the most common symptoms being rash, swollen lymph nodes, fever, headache, fatigue and muscle aches. The rash may be painful and have lesions that look like pimples or blisters that can occur on the face and other parts of the body.

Hall said his lesions caused "probably some of the worst pain that I've ever experienced in my life."

People are typically infected by close person-to-person contact though it is possible to be infected by animals through a bite or a scratch or through preparation and consumption of contaminated bush meat.

However, in the current outbreak, most of the spread has come from coming into prolonged skin-to-skin contact with infected people's lesions or bodily fluids. The illness can also be contracted from the clothes or other fabrics, such as bedsheets, used by an infected patient.

Anyone can contract the virus and despite misinformation circulating online, it is not a sexually transmitted disease or infection though it can be contracted through sexual contact.

One study in The New England Journal of Medicine reported that 95% of recent cases were likely transmitted through sexual close contact. 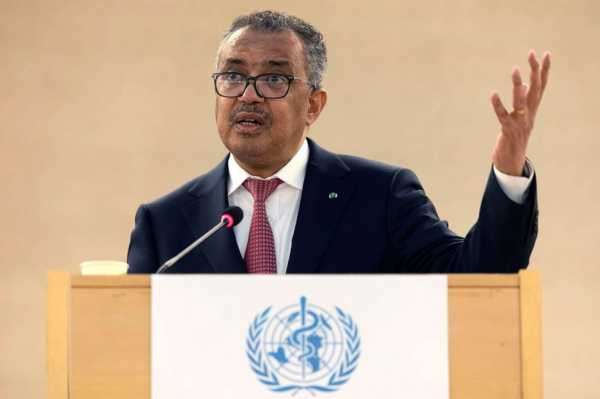 Tedros Adhanom Ghebreyesus, Director General of the World Health Organization (WHO) speaks during the 75th World Health Assembly in Geneva, on May 24, 2022.Salvatore Di Nolfi/AP, FILE

He continued, "It's the same thing with monkeypox. Monkeypox is a disease that does not require sexual intercourse to be transmitted and if we continue to call it a sexually transmitted infection, it mischaracterizes the manner in which it is transmitted."

MORE: 2 children confirmed with monkeypox in US

At least two pediatric cases have been identified in the United States as well as one case in a pregnant woman, according to the CDC.

"The stigma associated with this disease and gay men happened because this disease ended up, first and foremost, attacking and perpetuating in the gay population," Halkitis said. "I call [monkeypox] an infection or a disease of connectedness and intimacy that you could get from your grandma or you can get from your child or you can get from someone you're not engaging in sex with."

The rollout of the monkeypox vaccine, as well as outreach to populations at a higher risk of contracting the virus, faced a rocky start.

Activists say that shame and lack of outreach have silenced those who contracted the illness and have left many at-risk populations mis- or underinformed.

"We need to meet each other where we are. And that is through harm reduction, that is through sharing healthy ways to reduce risk," Jason Rosenberg, an activist at ACT UP NY based in New York City, told ABC News.

Stigma against the illness has prompted concern from activists, who say monkeypox has become a tool for anti-LGBTQ haters against the community. 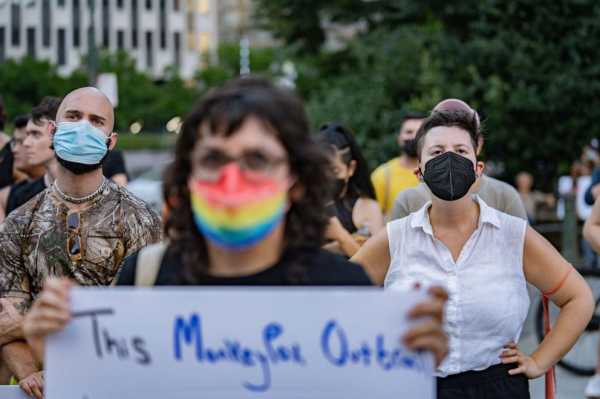 People protest during a rally calling for more government action to combat the spread of monkeypox, on July 21, 2022 in New York City.Jeenah Moon/Getty Images

LGBTQ activists say they have noted a rise in homophobic or transphobic messages about monkeypox online, something doctors say may make those diagnosed with monkeypox — LGBTQ or not — reluctant to come forward about their illness.

"I'm certain there are patients out there with monkeypox who are not coming forward or who have a concern they have monkeypox or were exposed to monkeypox who, because of the stigmatization, are not reaching out to their health care providers or getting the help that they need at a time when it is really critical," Dr. Scott Roberts, an assistant professor and the associate medical director of infection prevention at Yale School of Medicine, told ABC News.

He continued, "We're at this critical phase of this outbreak where we should be doing everything we can to stop this before it becomes endemic. The obvious risk is that people go about their daily lives while infected and spread this to other people."

MORE: 5 things to know about monkeypox and skin: Analysis

Roberts said he has seen patients who have told him that monkeypox is restricted to the men who have sex with men community so there is no reason for them to be concerned.

"We do need to warn people who have exposures that they might be at risk if this continues to grow," he said. "As this does get bigger, which we're all anticipating, it's only a matter of time until this hits other groups."

"And when that happens, you know, our hope is that we haven't really done damage from stigmatization where either people haven't come forward or those people who are exposed do not seek vaccination or any medical care because they don't think they can be infected with it," Roberts added.

Hall said he shared his story online in hopes of shattering the stigma.

"I want to normalize this for people and say like, 'Hey, I'm here. Here's my face. I have monkeypox. This is what the experience has been like for me. And it's okay to talk about it,"' Hall said.