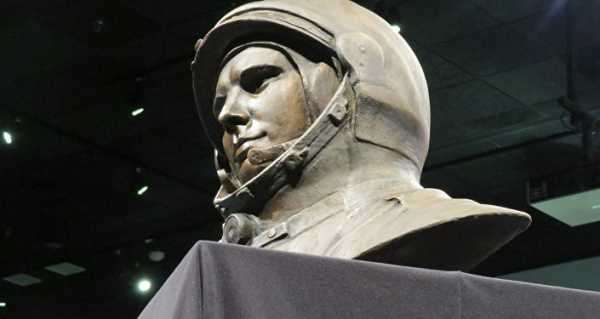 Monday marks the 60th anniversary of Gagarin’s space flight – the first in human history. On April 12, 1961, Gagarin pronounced his famous “Poyekhali!” (Let’s Go!) as the Vostok spacecraft lifted off the ground, taking the first person ever to space. After orbiting the Earth once, the re-entry module landed on the territory of what was then the Soviet Union.

April 12th, he added, “is the day that everything changes for humanity”.

Soviet cosmonaut Yuri Gagarin, the first man to travel into space, hits the headline of the US paper “The Huntsville Times” on April 12, 1961

Zelibor went on to say that Gagarin’s flight is emblematic of the human experience to explore and take risks by going into the unknown.

Zelibor added that those images were not just visual proof, but they shared the wonder and imagination of what’s possible for people to achieve.

The fact Russia, the US, China and others have spacecraft distributed throughout the system, bearing their respective flags, tells the universe: “We’re here and we’re going to explore wherever it takes us.”

Zelibor underscored that that represents a powerful testament to how the global space ecosystem can work together to tackle bold missions in space but also address big problems on Earth.

“Today Space Foundation works with educators from around the globe. In our Teacher Liaison Programme, we have hundreds of elite educators from 14 different countries participating – all with one goal – making a better future for everyone,” he said. “We don’t have one from Russia yet, but that’s something we want to have happen soon. That’s progress by any measure and it all starts with that first flight.”

Zelibor noted that for the past decade, Space Foundation has hosted an annual “Yuri’s Night,” to celebrate Gagarin’s flight, and it is usually aligned with the annual Space Symposium. Because of the current pandemic, this year on Saturday, April 17th, the Foundation will host a virtual gathering that will allow families to participate in an interactive event dubbed “choose your own adventure”.

Zelibor noted that participants will be able to help the pioneering astronaut, Astrid, who was inspired by Yuri Gagarin and every space pioneer that has followed, as Astrid seeks to be the first human on Mars.

Zelibor added that Space Foundation has used Yuri’s Night as a fundraiser for multiple education programmes, teachers, students and families worldwide. This year’s programme, he said, is also about helping young people see their place in the global space ecosystem.

“It is also a moment to give pause and reflect on how that first flight changed the world and every person on it,” Zelibor stressed. “Nothing was ever the same after that flight, and every bold step we take since Gagarin’s flight proves there’s nothing we cannot do without knowhow, dedication and courage. It’s a tremendous legacy.”

Many people in the United States are unaware, either of the achievements of the Russian space programme, or the risks taken by legendary cosmonaut Yuri Gagarin during his pioneering space flight, and that story should be told better, Zelibor told Sputnik.

Zelibor said many Americans today value his achievement despite the competition between the US and Russia, but back then, in the tension of the Cold War, things were different.

“We can certainly celebrate history-making achievements when they occur, but history gives us ripples of understanding and perspective that give moments like Gagarin’s deeper meaning and appreciation,” he added.

ISS Represents Perfect Platform for Russia, US to Boost Relations

Zelibor said that is one of the reasons the Space Foundation selected the five primary partners of the ISS – the United States, Canada, Japan, Russia and the European Space Agency (ESA) with its Space Achievement Award this past year.

The Space Agency chief said space remains one the very few areas where the two countries continue to cooperate amid their worsened relations.

Zelibor pointed out that ever since Russian and US astronauts started to train together onboard the Space Shuttle and the Mir Space Station in the 1990s, political and cultural barriers had broken down, not just between the crew members, but also the support teams around them.

Zelibor said he believes that one of the most impressive relationships and lifelong friendships born of that exchange was between astronauts Tom Stafford and Alexei Leonov – “two of the Space Race’s most notable space pioneers.”

On 7 April 2011, the UN General Assembly proclaimed 12 April as the International Day of Human Space Flight on the occasion of the 50th anniversary of Gagarin’s first space flight. The resolution was co-authored by more than 60 UN member states.

The Space Foundation, located in Colorado Springs, Colorado, is one of the leading organisations in space awareness activities and major industry events.