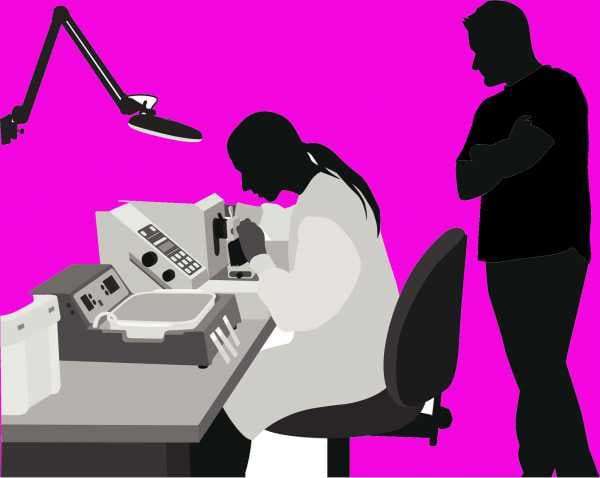 Science needs to reckon with the #MeToo moment, and it needs to do it immediately, says a new report from the prestigious National Academies of Sciences.

Though the scientific community hasn’t seen quite the gush of sexual harassment allegations as Hollywood, they’ve been emerging in fields as diverse as geology and climate change, anthropology, and biology, with the resignation of cancer biologist Inder Verma from the Salk Institute for Biological Studies last week. The sweeping new review says these anecdotes represent a much deeper systemic problem.

Based on decades of research on sexual harassment in academia, as well as qualitative interviews with harassment victims, the National Academies described a rampant problem in medicine, engineering, and science that academic institutions are currently failing to address.

“More rapid and sustained progress in closing the gender gap in science, engineering, and medicine is jeopardized by the persistence of sexual harassment and its adverse impact on women’s careers in our nation’s colleges and universities,” the report reads.

The report’s findings are worth going over, since they point to solutions that might ameliorate the lives of women in science.

1) Sexual harassment in science is common

The report authors collated data on how common sexual harassment in academic settings is, and — surprise, surprise — they suggest science is not at all immune to a problem that plagues many industries.

Several surveys outlined in the report found staggering rates of sexual harassment in science, medicine, and engineering. Some 20 percent of female undergraduate and graduate science students, more than a quarter of female engineering students, and more than 40 percent of medical students have experienced sexual harassment by the faculty and staff they work with, according to a survey from the University of Texas.

Another survey, from the Pennsylvania State University system, came to similar conclusions: 33 percent of undergraduates, 43 percent of graduate students, and half of medical students have experienced sexual harassment, the NAS reported.

“These data should not be surprising considering that the academic workplace (i.e., employees of academic institutions) has the second highest rate of sexual harassment at 58 percent,” the NAS reported, when compared to the private sector, military, and government. (Only the military ranked higher, with a 69 percent sexual harassment rate.)

The authors of the report also noted that science shares features that are common to places with higher rates of sexual harassment: It’s male-dominated, it’s hierarchical, and it’s filled with relationships of dependence between faculty and trainees. Plus it features isolating environments like labs and hospitals, where researchers and students spend long hours cooped up together.

The report also cited the “macho” culture in some scientific disciplines and certain environments, especially field sites, as being particularly conducive to harassing behavior. “Women have shared that their colleagues at field sites feel the need to behave like ‘Indiana Jones,’ and enforce this behavior in others,” the report said.

Sexual harassment was more commonly reported among women than men, but certain groups of women in science were particularly vulnerable.

“Those who have multiple marginalities — for instance women of color and sexual- and gender-minority women — experience certain kinds of harassment at greater rates than other women,” the researchers found. Women of color were also the more likely to report feeling unsafe at work, particularly because of their gender.

3) The most common form of harassment in academia? Degrading jokes and comments that made women feel excluded.

In a series of 40 qualitative interviews with women in academic science, engineering, and medicine who have experienced sexual harassment, about half reported physical abuse.

But more common than unwanted sexual attention or coercion in academia was “gender harassment.” This includes remarks and behaviors — crude comments, belittling jokes — that denigrate women and make them feel inferior or like they don’t belong, especially in leadership positions. This gender harassment also referred to creating environments that made women’s needs seem second-class.

Here’s one assistant professor of engineering interviewed for the report telling her story:

Most disturbingly, the researchers noted, the motivation of gender harassment is intended to create a hostile environment toward women, to put them down.

An environment that demeans women and makes them feel frightened or excluded is also an environment in which women have trouble excelling. And women who worked in labs and hospitals where they were experiencing harassment were more likely to be absent from work, avoid conferences and meetings, and quit their jobs, the report found.

Some even decide to abandon the sciences altogether. One of the qualitative interviewees in the survey declined a Google job offer because she didn’t want to work in a male-dominated workspace.

Though it’s not clear precisely how much sexual harassment drives employee turnover or hurts women in their academic jobs, the researchers made a compelling case that this behavior not only has a cost for women, but for society at large:

The report offered several pages of recommendations for how to fix the sexual harassment problem in science. These included creating work environments that are more diverse and inclusive, initiating legislation that protects sexual harassment victims from retaliation, and developing clear and consistent policies on sexual harassment and standards. They’re not that different from the solutions that have cropped up in conversations about addressing the problem in other industries, from film to food service.

Researchers recently launched a petition to revoke National Academy of Sciences memberships of people who have been disciplined for sexual harassment, retaliation, and assault. And cancer biologist Inder Verma, a NAS member, recently resigned as editor-in-chief of the NAS journal Proceedings of the National Academy of Sciences over multiple sexual harassment claims — but he still holds his NAS membership.

“It was just infuriating to me that the National Academies are studying sexual harassment and also harboring sexual harassers,” BethAnn McLaughlin, an assistant professor of neurology at Vanderbilt University who launched the petition, told the Washington Post. ”For [NAS president and report co-author Marcia] McNutt not to have cleaned house is offensive to me as a woman. And it certainly undermines the credibility of the National Academy to implement meaningful change.”