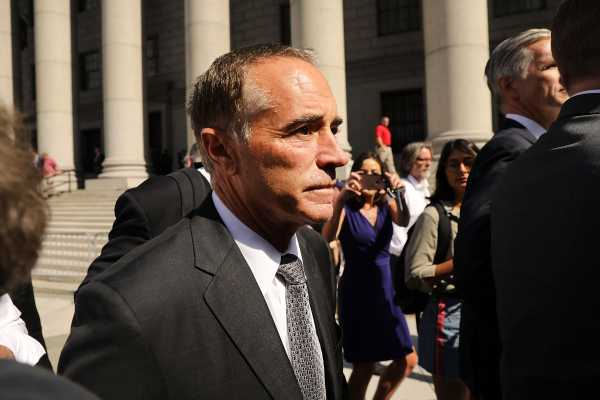 New York Republican Rep. Chris Collins was arrested by the FBI on Wednesday alongside his son and the father of his son’s fiancée on insider trading charges. For those who have followed Collins closely in Congress, this news was both huge and incredibly unsurprising.

Collins has become an important figure in Washington politics under President Trump; the first congressional Republican to endorse the president’s candidacy, he’s one of Trump’s close confidants on Capitol Hill and is almost always toeing the Republican line.

He’s known for being loose-lipped about closed-door meetings with Trump, and is often found holding court with congressional reporters. He likes to say that he prefers to exhaust the press, rather than the other way around. It’s gained him some name recognition — in New York state politics and definitely in Washington.

Before Trump, Collins wasn’t a household name. He’s not a member of the House Republican leadership team, and despite once being discussed as a political contender for a gubernatorial bid in New York in 2010, he hasn’t been much of a political player outside his western New York district.

He held a seat on the powerful House Energy and Commerce Committee, which has purview over public health, but he’s not known as a policy mastermind. (House Speaker Paul Ryan pulled Collins from the committee in light of the arrest.) Yet in both of Republicans’ major policy fights, Collins appeared to always be around the circles that mattered.

One more thing: It’s been a joke among reporters, staffers, and lawmakers in Washington that Collins would one day end up in jail.

Now, two months before a challenging midterm election cycle for Republicans, as Democrats attack the GOP for being the party of corruption, Collins — an increasingly prominent Trump ally — is embroiled in federal charges for insider trading.

On Wednesday, Collins was arrested on charges relating to his connection to the Australian biotech company Innate Immunotherapeutics. As the company’s largest shareholder, Collins allegedly shared private insider information with his son Cameron Collins, who then passed on information to his fiancee’s father, Stephen Zarsky.

According to the indictment, inside knowledge of a failed drug trial allowed Zarsky to avoid nearly $800,000 in investment losses. It’s a major development in a corruption scandal that’s been unfolding for the greater part of the past year.

The federal indictment charges Collins, his son, and Zarsky with 13 counts of wire fraud, securities fraud, and making false statements to the FBI. Collins’s lawyers said the lawmaker would be “vindicated.”

Collins got on the Trump train early; he initially endorsed Jeb Bush, but then in February 2016 became the first congressional Republican to endorse Trump as a presidential candidate, a few days after Bush dropped out of the running.

“We need a chief executive, not a chief politician,” Collins said of Trump then. “Donald Trump is the individual as president that can lead this country and reclaim our great state and provide a bright future for our children.”

When the Access Hollywood tape came out on which Trump can be heard bragging about sexually assaulting women, Collins only doubled down in support.

It’s a loyalty that puts the New York Republican in a good position. He was named to Trump’s presidential transition team after the 2016 election as a congressional liaison and has maintained a personal relationship with the president. He gets invited to White House lunches — where he sits next to Trump — and goes on television to support the president.

Last year, when the congressional ethics committee started investigating him for the very same allegations of insider trading he was just arrested for, Vice President Mike Pence fundraised for Collins.

In recent policy fights around health care and tax reform, Collins was the kind of politician who was blunt about the divisions within the Republican conference while finding a way to elevate Trump above the party infighting. He voted for the House’s Obamacare repeal-and-replace bill and the tax bill — both of which disproportionately disadvantaged New York constituents.

He says he did it for the party Trump now leads — not his constituents: “My donors are basically saying, ‘Get it done or don’t ever call me again,’” Collins said during the tax fight.

The indictment, served by the US attorney in Manhattan, was damning.

“Collins, who, by virtue of his office, helps write the laws of this country, acted as if the law did not apply to him,” US Attorney Geoffrey Berman said at a news conference. Collins, his son, and Zarsky all pleaded not guilty.

While Berman made clear that this arrest is not related to Collins’s position as an elected official, his ties to this Australian biotech firm haven’t been just a family affair.

Last October, the Office of Congressional Ethics reported that it found “substantial reason to believe” Collins was using his position in Congress to personally benefit the company and solicit investors. GOP lawmakers told reporters that Collins has urged his colleagues to invest in the company on the House floor. A number of Republican members of Congress, including Texas Reps. John Culberson and Mike Conaway, are also investors in this company.

Both the Hill and the Daily Beast reported last year on Collins’s habit of bragging to colleagues that he knew how to make a buck. The Washington Post’s Mike DeBonis even once tweeted about overhearing Collins:

It’s unclear if he was talking about his position with the biotech company, but it seems like Collins hasn’t been keeping his investments under wraps.

To reporters on Capitol Hill, Collins’s arrest is a major development in an ongoing scandal — one that makes it easier for Democrats to make the case that Trump isn’t draining the swamp.