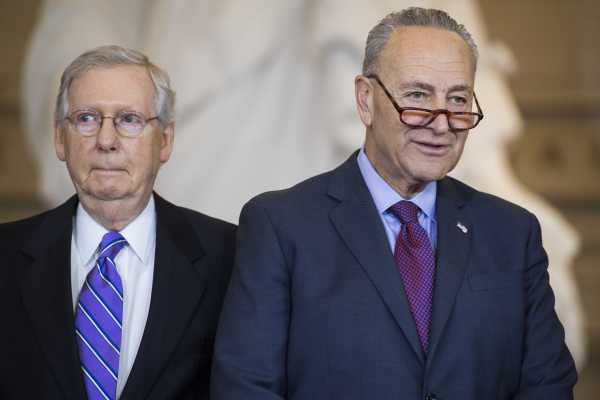 Senate Democrats are nearing a reckoning over the deal they made last month to reopen the federal government. At 12:01 am on Friday, the government will run out of funding.

Last time, agitation from progressive activists convinced Democrats to shut down the government over the Deferred Action for Children Arrivals program, which provides work permits and deportation protections for nearly 700,000 people brought to the United States illegally as children. Though the March deadline for fully sunsetting the program is just around the corner, there doesn’t seem to be the same appetite among Democrats to close the government this time.

Democrats are betting they’ve found a road out of Shutdown Valley, thanks to a commitment they secured from Senate Majority Leader Mitch McConnell, that will allow them to amplify the pressure on House Republicans and President Trump to fix DACA without being forced to shutter the government again.

The Democratic thinking seems to be this: They have a pledge from McConnell to initiate an immigration debate in the coming days, one they believe will lead to the Senate passing some kind of bipartisan legislation. An overwhelming Senate vote, they think, will change the underlying dynamic of the DACA standoff, forcing the House and Trump to the table to find a real resolution to the issue — and if they don’t, the blame will be squarely on them.

That removes the need to shut down the government. But it’s a bet that requires McConnell to follow through on his word and for the debate to change as Democrats believe it will. After the minority showed little appetite for keeping the government closed last month, it appears to be their only option left.

If Senate Democrats and Republicans were able to reach some agreement on immigration before February 8, that would be the end of the matter.

But if an agreement is not reached, McConnell’s promise is this: He will bring an immigration bill to the Senate floor for debate after February 8 — so long as Democrats don’t shut down the government again.

“Should these issues not be resolved by the time the funding bill before us expires on February 8, so long as the government remains open,” the Republican leader said in a Senate floor speech — repeating for emphasis “so long as the government remains open” — “it would be my intention to take up legislation here in the Senate that would address DACA and border security, as well as other related issues.”

So McConnell’s condition for an immigration debate is that Democrats don’t oppose another short-term spending bill that the Senate will likely need to pass on February 8. So long as the federal government is funded, he’ll bring some kind of DACA bill to the floor; as for which one, he specifically referenced the ongoing negotiations between the No. 2 leaders in both parties and both chambers.

He also pledged to have a fair and open amendment process for whatever immigration bill is brought to the Senate floor.

“Let me be clear: This immigration debate will have a level playing field at the outset and an amendment process that is fair to all sides,” McConnell said.

Democrats believe they have McConnell committed to moving an immigration bill

McConnell’s promise is predicated on an immigration agreement not being reached before the February 8 deadline for a new spending bill — and on Democrats not shutting down the government again when the time for another extension comes.

Progressive activists were dubious when they railed against Senate Democrats’ decision to end the shutdown. McConnell originally pledged to Sen. Susan Collins (R-ME) that a pair of health care bills would be brought to the floor before the end of last year. There had also been assurances given to Sen. Jeff Flake (R-AZ) that a bipartisan DACA bill would get a vote on the Senate floor. Neither promise was met, though the senators involved have signed off on the delays. The point is, the progressive base doesn’t see McConnell as a good-faith negotiator and slammed the Democratic deal with the GOP leaders for that reason.

Nobody seems sure, with February 8 just days away, what happens now. Even if Democrats vote to keep the government open with another short-term bill this week and meet McConnell’s condition, there would be at least one more funding vote later in February or in March that would theoretically give them leverage to force a fight over DACA.

It might not come to that. Even Democrats who opposed the agreement to end the shutdown thought McConnell would have a hard time getting out of his commitments. That should then give them a chance to get an immigration bill out of the Senate.

“I understand people are worried he broke his word to a few of his members,” Sen. Chris Murphy (D-CT) told me. “But it is something different to make a promise on the floor of the Senate to dozens of members rather than one or two.”

Senate Democrats believe that if McConnell keeps his promise and the Senate does pass a plan with overwhelming bipartisan support, that would put the onus on House Republicans to acquiesce or take the blame this time for failing to negotiate.

The hardline conservatives have been intransigent on immigration, but the minority has calculated that this is the best move they have. Their only other option is to risk another shutdown dragging out and Republicans continuing to bludgeon them for holding the government hostage over what the GOP has repeatedly claimed is an unrelated issue.

“If we have a bill that gets broad bipartisan support in the Senate, that sends a pretty strong signal to the House that this is something that can pass,” Sen. Gary Peters (D-MI) told reporters.

Democrats also seem to think they’ll have a cleaner narrative next time if Republicans waffle on DACA and hundreds of thousands of people are at risk.

“I think it’s not impossible for us to get to not only 60 votes, but beyond 60 votes,” King told me. “If that happens, that puts tremendous pressure on the president and on the House to act on this.”

“Plus, do they really want to start deporting third-grade teachers on March 5?” he added. “I don’t think so.”

Of course, in 2013, the Senate passed a comprehensive immigration reform plan and House Republicans never acted. It’s not at all clear that this time will be different, though the Senate Democrats who voted for the last spending bill are arguing it is.

“We do have a deadline here, March 5,” Peters said. “These young people who will be losing work permits and will be in really rough shape on March 5 — that’s really a pretty hard deadline for everybody to look at. If you don’t support some type of bipartisan solution to this program, you’re going to have folks with serious disruptions to their life.”