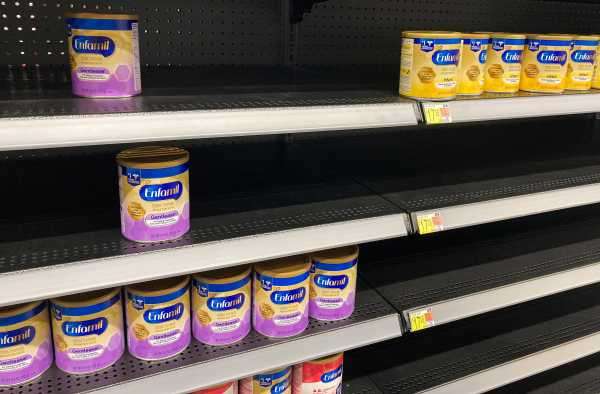 Baby formula has been running low all over the United States, threatening the health of infants and other people who depend on it for their sustenance.

Experts say this is the worst formula shortage in decades. It’s also the latest example of how the US health system’s failures consistently fall hardest on people with complex medical conditions and people who are socioeconomically disadvantaged.

The shortage can be traced back to a contamination problem at an Abbott factory that produces much of the Similac formula, as well as several other brands, for the US market, Abbott voluntarily shut down the factory in February, amid consumer complaints about contaminated formula that was linked to two infant deaths. As of mid-May, it’s still not up and running again. As Politico reported this week, it’s not exactly clear why Abbott and the FDA have failed to come to an agreement that would allow the plant to resume producing formula and help alleviate the shortage.

That factory’s prolonged shutdown, combined with general supply-chain problems for the formula ingredients and packaging, have led to formula stock drying up fast. Nationwide, about 40 percent of the most popular baby formula brands were out of stock as of April 24, according to the Wall Street Journal, much higher than the 10 percent average in normal times. Some parts of the country, like the San Antonio metropolitan area, are seeing more than half of their normal supply out of stock. Panic buying amid news of the shortage has already caused some major chains to limit the number of formula containers that any one person can buy. Public officials are already worried about the possibility of price gouging.

As long as supplies are limited, some people may struggle to feed their children or themselves. It is people of color and people living in poverty, along with the people who must take special formulas for medical reasons, who will be most exposed to the health and economic consequences of a prolonged formula shortage.

“Certainly, the families who have fewer resources, have fewer options, who aren’t able to pay premium prices are going to be more at risk,” said Ann Kellams, a University of Virginia faculty pediatrician and board president of the Academy of Breastfeeding Medicine.

Why a baby formula shortage is so serious, briefly explained

Most families rely on infant formula to one degree or another. Nearly one in five babies receive formula within their first two days of life, according to the CDC. By three months, less than half of babies are exclusively breastfeeding, meaning they are taking at least some formula as a supplement.

But all families are not equally reliant on formulas. According to CDC survey data, people living in poverty are most likely to report that they’ve supplemented with formula in the first three months of their baby’s life. Black, Hispanic, Asian, and American Indian parents are all more likely to say that they used formula within three months than white parents.

And for some people, formula isn’t a choice but a necessity. Sometimes an infant struggles with breastfeeding and needs formula to continue gaining weight. But allergies or immune conditions can also necessitate using formula, including into childhood and adulthood. As Politico noted in its report, about 2,000 Americans have a metabolic disorder so severe that amino acid formula is their only means of survival.

Changing formulas is definitely possible, but can still be tricky with infants because of digestive issues — and can be difficult if a person’s dietary needs are especially strict. During natural disasters, when formula can become even more scarce, the CDC urges breastfeeding mothers who also use formula to consider breastfeeding more.

But for some people, that is not going to be possible, either because they can’t breastfeed or pump more or because they need specialty formula. And experts strongly discourage people from trying to make their own formula at home, giving the severe risks — including death — if a nonprofessional doesn’t get the formula right.

That leaves many families with few options available to them, prompting them to wonder how they will feed a loved one who depends on out-of-stock specialty formula to survive.

Some are taking drastic measures, with the New York Times reporting parents have been rationing formula or watering it down, both of which can be harmful to kids. Some experts recommend checking with your pediatrician for samples, but that is another way in which the US health system disadvantages certain people: People in poverty and people of color are also less likely to have a regular source of health care.

The US policy failures are colliding in the formula shortage

America’s weak support for new parents and babies will only make it harder for people to cope with the baby formula shortage. Even if a parent at a low-wage job wanted to pump breast milk at work or take time off to be able to breastfeed a baby at home, they are also the workers who are least likely to have paid family leave or have adequate space and time at their workplace to pump.

A stronger social safety net would have left the US better positioned to navigate this shortage, Kellams argued. She pointed out that, given the lack of paid leave in the US, the country is always forcing new parents to make difficult decisions about how to balance the need to take care of their children with the need to support them financially.

That problem only grows more acute in a crisis like this, where parents could struggle to find and provide the most basic nutrition to their child because of the economic dilemma the US has set up for them.

“Part of the problem could have been prevented if we took better care of our children,” Kellams said.

Nobody is sure how long the shortage will last but, already, advocacy groups like the National WIC Association want a greater accounting of how this crisis came to pass. They point to the tremendous concentration in the formula market, with only three companies bidding to provide formula for the 1 million babies who receive formula through the WIC program.

The FDA has also suggested ways in which the US might avoid future emergencies. Currently, no law requires formula manufacturers to inform the federal government about any looming supply interruptions. Requiring a warning would give public officials a chance to start making contingency plans.

But for now, the formula shortage is instead yet another extraordinary example of the failures of the US health system, with the richest country in the world struggling to provide basic nutrition to many of its infants.

As Brian Dittmeier, senior director of public policy at the National WIC Association, said in a statement: “As a country, we must take a hard look at how we got to this moment.”

How Putin became the victim of his own lies