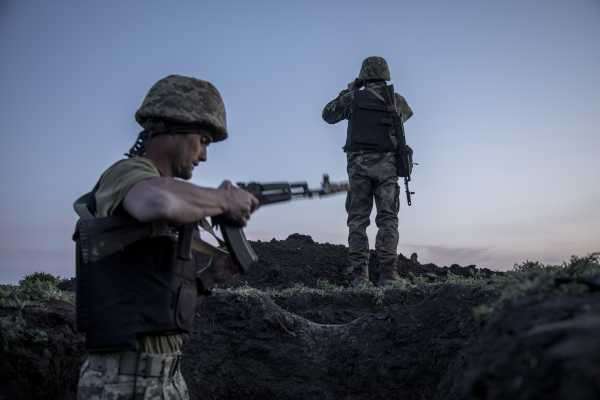 Over three weeks ago, Russia launched a new phase of its war in Ukraine: an effort aimed at seizing control of the Donbas region in the country’s east. This new objective was a significant climbdown from its initial goal of regime change in Kyiv, and one that seemed more achievable. Many observers thought the offensive might yield enough concrete gains for Putin to say “mission accomplished” on May 9, a Russian holiday called Victory Day commemorating the defeat of Nazi Germany.

Yet when the day itself came, Putin did not say much of anything along those lines. Perhaps this was because he had little to brag about.

A May 9 US intelligence estimate concluded that the Russians had gained only a few miles in the Donbas region since the offensive began; a Pentagon official described Russia’s efforts as “incremental and somewhat anemic.” The offensive’s aim — a sweeping advance cutting off Ukrainian forces in the Donbas from the rest of the country — is looking increasingly out of reach.

“They clearly lack the forces to be able to achieve this operational scheme,” says Michael Kofman, an expert on the Russian military at the CNA think tank. “The offensive isn’t making dramatic gains, and there appears to be very little likelihood of a general breakthrough.”

What Russia’s unimpressive offensive means for the war’s big picture is less clear.

During the war’s first phase, when the heaviest fighting was focused on Kyiv, Russian forces were able to gobble up large swaths of the Donbas — advancing across as much as 80 percent of the region’s territory, per a local Ukrainian official’s estimate in late April. Repulsing the current Russian advance is thus not enough for Ukraine to attain total victory in the region; to do so, its forces would need to go on the offensive and take back significant amounts of land.

Some experts believe the Ukrainians are capable of doing just that — that the Russian offensive will soon peter out and, quite possibly, collapse into a full-scale rout. Others are more skeptical, noting that the Ukrainians haven’t proven their offensive capabilities and have also suffered significant losses. They predict a range of possible outcomes, including a stalemate with entrenched lines on both sides or a fluid conflict where the two sides continually swap territory.

But while much remains unpredictable about the Ukraine war, it’s fair to say the range of plausible outcomes is shrinking. Back when Russia launched its invasion in late February, it appeared likely that Moscow would eventually succeed at toppling the Ukrainian government. Now that possibility is nearly unthinkable, with even the limited victory of stamping out the Ukrainian presence in the Donbas seeming unlikely at best.

Russia’s current territorial holdings in Ukraine give it some leverage during any (as-yet-hypothetical) peace negotiations. But Ukraine’s battlefield victories mean that Russia will, in virtually any plausible scenario, fall far short of its initial war aims. There are fewer and fewer favorable endgames for Russia, and it’s hard to see how that could change.

How we know Russia’s offensive is stalling out

The Donbas is Ukraine’s easternmost region, stretching from Luhansk down to around Mariupol in the south and directly bordering Russia and Russian-held territory in southern Ukraine. There has been fighting in the region since 2014, when pro-Russian separatists began a war against the central government in the Donbas’s eastern areas. Prior to the 2022 invasion, these fighters controlled about one-third of the Donbas; much of Russian war propaganda has focused on the need to “protect” the pro-Russian population in the Donbas from a supposed Ukrainian genocide.

No such genocide has been taking place. From the outset, the Russian invasion has been an act of aggression — an attempt to assert control over Ukrainian territory and topple its government. Part of the early attack included a move westward through the Donbas, which expanded the amount of the region’s territory nominally under Russian control.

Yet with the bulk of its forces preoccupied elsewhere in Ukraine, Russia was not able to consolidate its hold on the region. Ukrainian defenders in Izyum, a city in the Kharkiv region just northwest of the Donbas, held off Russian invaders pushing down from the north for an impressively long time — buying time for the Joint Forces, the battle-tested Ukrainian fighters in the Donbas, to fortify their positions.

The current Russian effort in the Donbas, described as the war’s “second phase,” was seemingly designed to finally crush the Joint Forces by cutting them off from the rest of Ukraine. To do that, Russian forces tried moving down from the north, out from the east, and up from the south.

This April 22 map from the Institute of the Study of War (ISW) shows the situation at the start of the Donbas-focused offensive. Russian-controlled territory is in red; points of major conflict with Ukrainian forces are circled in green: 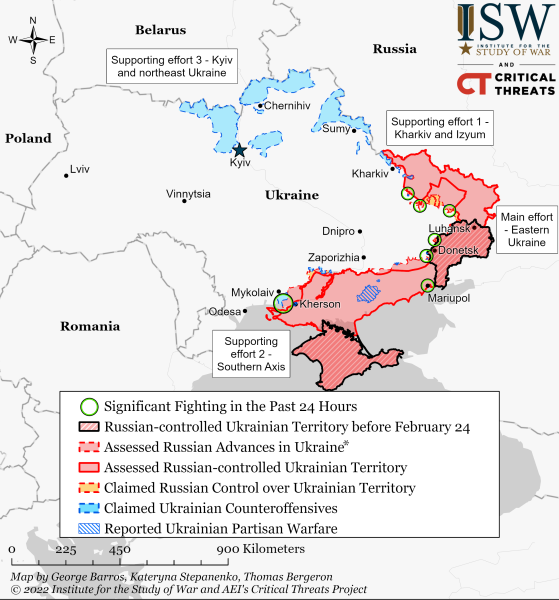 To see how little gains these efforts have yielded, compare the above map to ISW’s May 9 updated version. The lines of Russian control between the two sides have barely budged; most of the fighting is taking place in the same areas as it was in April: 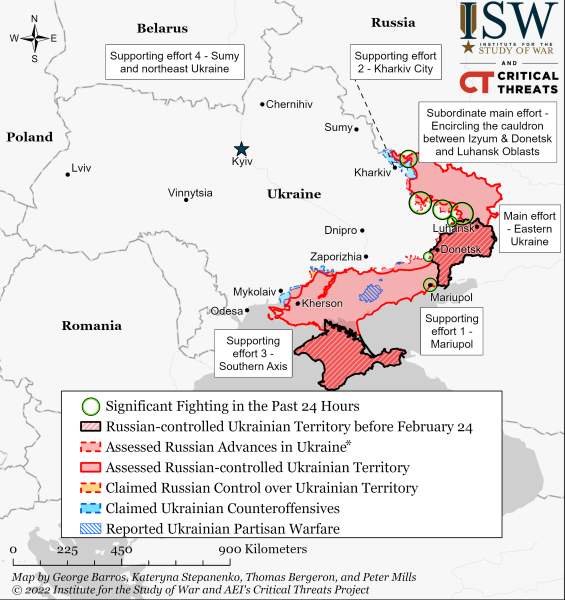 Part of the reason for this slow progress is design. Unlike the failed Russian attack on Kyiv, characterized by an attempt to seize the Ukrainian capital in a lightning advance, the Russian forces are now attempting to advance incrementally, using their greatest tactical advantage, superior artillery, to soften the ground before attempting to seize it.

But even judged by these standards, the Russians are making poor progress. Military analysts say that encircling the Joint Forces is, at present, a very remote prospect.

“It’s been going too slow for this to be accomplished anytime soon,” says Simon Schlegel, a senior Ukraine analyst at the International Crisis Group. “The Ukrainian forces have had time to reinforce their positions [and] have now received their first deliveries of heavy Western weaponry that they’re now employing there — probably just in time to stem this Russian advance.”

Even in Mariupol, a major city in the south of the Donbas that has been on the verge of falling for weeks, Ukrainians continue to put up resistance. A last band of fighters holed up in the Azovstal steel factory is still preventing Russia from exercising full control over the city.

While Russia has failed to make many gains, Ukraine has begun launching counteroffensives, attacking near Kharkiv and Izyum in the north and Kherson in the south. The Kharkiv attack is particularly threatening to Russia, with Ukrainian progress endangering the supply lines sustaining the Donbas offensive.

As a result of the Russian offensive’s problems, there’s already been a reorientation in Russian efforts toward the city of Severodonetsk, which, according to Kofman, reflects a strategic abandonment of the grand encirclement plan at the offensive’s outset.

But experts are skeptical that this new approach will succeed in yielding massive gains either.

Russia at the moment does not appear to have the capacity to press endlessly and rerun its World War II playbook by crushing its opponent with sheer numbers. Putin has not shifted his country to a full war footing, maintaining the fiction domestically that Russia is engaged in a “special military operation” rather than total war with Ukraine. A full mobilization would take time — requiring the training, equipping, and deployment of reserves — and the signs of this work beginning aren’t there. Some Western officials believed that Putin’s Victory Day speech might have been an opportunity to kick off a wider mobilization, but nothing in the Russian president’s address suggested this was in the cards.

As a result, Russia needs to use the forces it already has available to take the Donbas. And the evidence that’s publicly available suggests that this isn’t enough.

“The second phase has been underway for a month now and the Russians have made few gains,” writes Lawrence Freedman, a professor of strategic studies at King’s College London. “The Russians have amassed whatever forces they can muster for this latest push, with little left in reserve, and it does not appear to be sufficient.”

Why Russia is stumbling — and what might come next

The reasons for Russia’s difficulties in the Donbas won’t surprise anyone who has been following the war closely. Again and again, analysts following the conflict have pointed to the same set of factors as decisive:

At the start of the Donbas offensive, it was not clear how much the Russian military would be able to address these flaws, which were apparent in its spectacular failure to take Kyiv. We now have evidence that they have not been adequately solved, and it’s looking increasingly plausible they won’t be in the immediate future.

If these problems persist and even intensify, it’s possible that Russian forces could collapse altogether. Freedman argues that this outcome is increasingly thinkable — seeing Russia’s failure around Kyiv, the defining front in the war’s first phase, as a model:

There are also real questions about the Ukrainian side, which has also suffered heavy casualties.

“We’re going into a situation where the Ukrainians would have to show their offensive capabilities and regain Russian-held territory,” Schengel points out. “That will require more manpower, since you need a three-to-one advantage when attacking rather than defending. We don’t know how the numbers would play out, and we don’t know whether they [the Ukrainians] would be able to sustain the sort of losses that come with that.”

If Ukraine proves unable to retake significant amounts of Russian-held territory in the Donbas, it’s possible that the fighting there could settle into a kind of bloody stalemate. In this scenario, the two sides would continue clashing for a long period at a lower level, sustainable on both sides, with little territory changing hands. This is similar to what the situation in eastern Ukraine was between 2014 and February 2022, something that both sides managed to live with for quite a while.

But while these two options — Russian defeat or stalemate — are often presented as a binary, there are other possibilities. The conflict could settle into a pattern of offensives and counteroffensives, with territory frequently changing hands without either side gaining the upper hand (military experts treat this as distinct from a frozen-line stalemate). We could see a strategic pause, where both sides retreat from the front lines before regrouping for a new round of fighting in different areas with different objectives.

So this war, like all wars, retains a significant element of unpredictability. There’s a lot that’s going to happen that no one can predict, and that will alter the final outcome significantly.

But at the same time, it’s increasingly clear that Russia’s ability to successfully launch major offensives — even with as limited an objective as consolidating control in the Donbas — is proving even weaker than previously thought. That raises the likelihood of a more favorable outcome for Ukraine — and makes Putin’s decision to invade in the first place even more puzzling in hindsight.

How Putin became the victim of his own lies