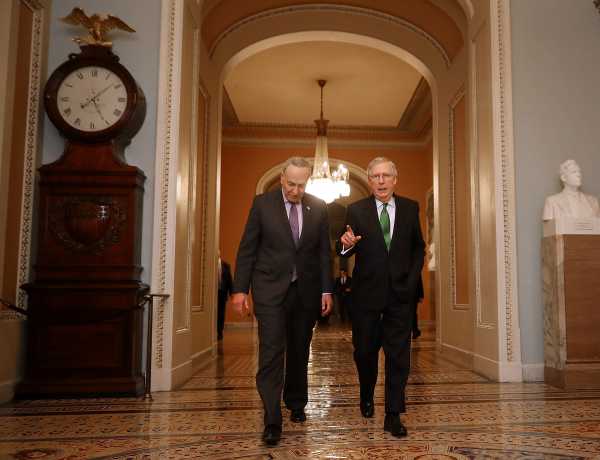 The much-anticipated Senate debate on immigration is set to begin Monday evening, and it’s still a mystery how it will go down.

Senate Majority Leader Mitch McConnell will kick off what is expected to be a week of Senate floor debate to address anything immigration on Monday — delivering on a promise he made to Democrats in order to reopen the government after a three-day shutdown in January.

Some are hopeful it will result in a legislative solution for the roughly 690,000 undocumented immigrants who will lose protections under the Deferred Action for Childhood Arrivals program, which the Trump administration has promised to sunset by March 5. But realistically, the debate — like immigration negotiations up to this point — will be all over the map. The coming debate could address everything from the fate of a proposed border wall to an overhaul of the nation’s legal immigration system.

Unlike most debates on the Senate floor, there’s no starting immigration bill for lawmakers to amend in either direction. The idea is to start with nothing and piece together a solution from scratch, the result of months of failed negotiations that have been stuck between the moderate-but-passable proposals that the White House won’t support and conservative Trump-endorsed proposals that won’t see Democratic support.

That means there are still a lot of unknowns: Which proposals will get a vote? Will Democrats get stuck with any conservative “poison pills”?

Some of the uncertainty is by design. McConnell promised a fair debate on the Senate floor: “There’s no secret plan here to try to push this in any direction,” he told reporters. But the Republican Senate leader is not known for going into major policy debates without a strategy. The debate will likely shape up to be a delicate dance between Republicans and Democrats — one that could result in bipartisan legislation, or in nothing.

“One little hiccup along the way and the whole thing could fall apart,” James Wallner, a political scientist with the conservative think tank R Street, who used to be the executive director of the Senate’s steering committee, said.

What to expect: what we know about an otherwise mysterious debate

McConnell says he doesn’t have a “secret plan.” He has kept his cards so close to the chest that even GOP senators have attested to being in the dark on the leader’s position and strategy.

“The Senate is going to work its will, and I hope that we will end up passing something,” McConnell said, saying he couldn’t go into specifics.

So to get an idea of what this week’s immigration floor debate will look like, we’re left to parse McConnell’s promise to Democrats very carefully. What we know:

Since McConnell’s promise, Democratic and Republican lawmakers have been banking on the prospect of “regular order” in the Senate, where lawmakers can engage in free and fair debate.

“The majority leader spoke about how the Senate used to work, something I have rarely seen, where you start with a bipartisan proposal and try to build from there,” Sen. Chris Coons (D-DE) told Vox last week. Coons has proposed a “skinny” immigration bill with Sen. John McCain (R-AZ) that would grant a path to citizenship for DREAMers and add some border security.

In the past, this kind of debating, which Wallner says bears similarities to how Harry Reid ran the Senate in the early 2000s, often protected a leadership-driven agreement put on the table. At some point, it’s possible McConnell will propose a substitute amendment, which would replace the shell bill. This would be subject to further amendments, but as Wallner points out, that process is often highly moderated and maintains McConnell’s position as the “gatekeeper,” not to mention that enforcing a 60-vote threshold will make it difficult for most amendments to become part of the final proposal.

“Liberals and conservatives get shortchanged,” Wallner said, as they are the most “out of step with leadership.”

But for now, we don’t know if there is an agreement between party leadership, if McConnell plans on bringing up a more partisan proposal, or anything at all.

There are a lot of immigration proposals out there

After months of negotiations, Congress has no shortage of immigration proposals. As Vox’s Dara Lind and I explained, the problem isn’t a lack of ideas; it’s a lack of the right kind of support:

There’s a White House proposal that calls for a path to citizenship for 1.8 million undocumented immigrants who came to the country as children, plus $25 billion to fund a southern border wall, while substantially curtailing family immigration and eliminating the diversity visa lottery program in such a way that would gut the legal immigration system. It’s gained the support of conservatives like Sen. Tom Cotton (R-AR) and has been panned by Democrats and moderate Republicans.

Also in the Senate, a bipartisan agreement between Sens. Lindsey Graham (R-SC) and Dick Durbin (D-IL) would offer legal status, and eventual citizenship, to young unauthorized immigrants, give about a year’s worth of funding for the border wall, and eliminate the diversity visa lottery. But it was panned by the White House and conservatives for being too liberal. There are a handful of other bipartisan proposals that follow a similar framework in both the Senate and the House, and even more working groups that have yet to come out with proposals, including Sen. Susan Collins’s (R-ME) “Common Sense Caucus,” which developed during January’s three-day government shutdown.

Most recently, a proposal from McCain and Coons would grant eventual citizenship to undocumented immigrants who came to the US as children and have been in the country since 2013, and some border security measures — but not the border wall. The senators put forward the idea as a proposal that could serve as the foundation for the floor debate on immigration this week.

A number of these proposals are expected to see a vote on the Senate floor this week. Which one can meet the 60-vote threshold, however, remains to be seen.

What we don’t know about this week’s debate

There are a lot of unknowns going into this week’s debate.

1) What will McConnell bring up? No one seems to know.

The Republican leader is not one for leaving things to chance. He still maintains a lot of control and power going into this floor debate, but not even his closest deputies seem to have a clear idea of his strategy.

“He’s trying to be an honest broker in this and just make sure that he treats people fairly. I’m sure he has his preferences. I’ve never heard him express them, exactly,” Sen. John Thune (R-SD), who is the third-ranking Senate Republican, told Politico.

McConnell has since expressed support for the Grassley-Cornyn proposal, but has yet to indicate whether it will be brought up to the Senate floor as a substitute amendment — or when.

“This legislation is a fair compromise that addresses the stated priorities of all sides,” McConnell said. It’s a partisan bill, that doesn’t have the support of Democrats.

At the end of the day, “McConnell’s strategy is to pursue the Republican agenda,” Sarah Binder, a political scientist with George Washington University who specializes in congressional procedure, said. But the Republican Party is so fractured on immigration that it’s difficult to parse how the leader sees this playing out.

“This isn’t a left-right dimension,” Binder said. “You have a divided Republican Party which disagrees on how to address DACA, border security, the visa lottery — that complicates getting to 60.”

2) How much will Democrats concede? As Vox’s Dara Lind explained, top Senate Democrats have increasingly adopted their positions on immigration from the activist community, pushing their platform further to the left.

Now they are both in a position of policy leverage, in that their votes are needed to pass any immigration proposal, and they are operating under Republican control — one that has moved far to the right on immigration under Trump.

We’ve seen areas of this policy debate where Democrats have been willing to make concessions; once adamantly opposed to approving any funding for Trump’s southern border wall, Senate Minority Leader Chuck Schumer put the border wall on the table in January, in an attempt to strike a deal with Trump before the government shutdown. Democrats have since walked back from the offer, but it seems like an area Democrats have identified for compromise.

Whether they are willing to accept more contentious proposals around legal immigration remains one of the biggest questions of this week’s negotiations.

3) What will Trump accept? McConnell’s promise to hold a floor debate came with a key concession: He said the Senate would stop focusing on Trump’s constantly fluctuating opinion on immigration and work its own will.

But eventually, Trump’s position will matter. Not only are Republican senators political under pressure to keep in line with the president, but House Speaker Paul Ryan has said he will not bring up a vote on immigration without Trump’s blessing.

Will this even work?

Lawmakers on both sides of the aisle say they’re confident they’ll come up with something. But there’s not much from the past months of negotiations to indicate that’s true, and they will be facing some serious political headwinds.

“If you need 60 votes, you are creating the possibility for a more broadly bipartisan policy,” Binder said. “But in a more partisan world … the outcome could just be gridlock.”