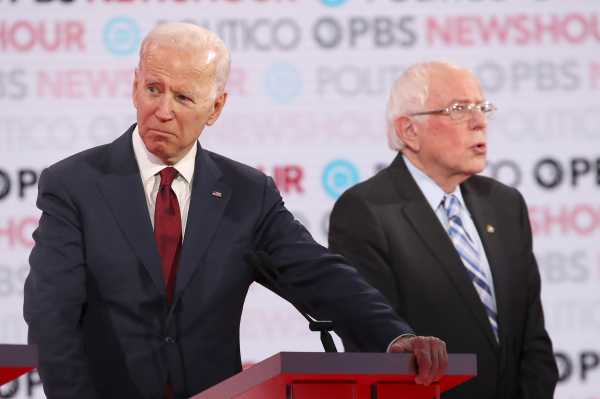 It’s happening: The final Democratic debate before the Iowa caucuses is here.

Top contenders for the Democratic Party’s presidential nomination will take the stage at Drake University in Des Moines, Iowa, on Tuesday, January 14. The debate will start at 9 pm ET and last for two hours.

Six candidates made the cut in both polling and donation qualifications and will appear at Tuesday’s event:

That means six other candidates will be left off the stage:

The Democratic National Committee has gradually increased the debate qualifications throughout this cycle, and the threshold for January is the highest yet: Candidates have to get at least 5 percent support in four DNC-approved national polls or 7 percent support in two early primary voting state polls, and they must have at least 225,000 donors.

That’s up from the December debate, when candidates had to get at least 4 percent support in at least four national polls or 6 percent support in two single-state polls in early voting states. They also had to have received donations from at least 200,000 people.

The criteria have garnered some grumbling among some contenders who didn’t make the cut. Ahead of the December debate, Sen. Cory Booker, who failed to make the stage, spearheaded a letter signed by other major candidates asking the DNC to reconsider its requirements and ask candidates to meet either the polling or the donor standard. The DNC appears to have no plans to make that change. (Booker dropped out of the race the day before the debate.) Bloomberg is self-funding his campaign, so he’s making no attempt to meet the DNC’s criteria.

After Tuesday, you can expect at least three more debates before the year even enters its third month: one in Manchester, New Hampshire, on Friday, February 7; the next in Las Vegas on Wednesday, February 19; and another in Charleston, South Carolina, on Tuesday, February 25.

(The pattern here: The debates are all just days ahead of the caucuses and primaries in the respective dates they’re being held.)

The race is getting tighter as primary season approaches

The stakes of the race feel extra-high as primary season approaches. The Iowa caucuses take place on February 3, and voting advances at a pretty quick clip from there: New Hampshire on February 11, Nevada on February 22, South Carolina on February 29, and then Super Tuesday on March 3, when multiple states vote.

Nationally, Biden has a sizable lead across an average of polls, followed by Sanders, Warren, Buttigieg, and Bloomberg. The race is pretty tight among the top four in Iowa and New Hampshire (Bloomberg isn’t campaigning heavily in either state and is instead focusing on Super Tuesday). But once results start to come in, the race could change pretty quickly, especially if there are surprises on who over- and underperforms, including potential surprise contenders like Klobuchar.

So Tuesday could get contentious. Not only is voting close, but this will be the smallest number of candidates we’ve seen onstage together this election cycle. That will give them more opportunities to make the case for their candidacies — and to draw contrasts with others.

Biden and Sanders have been more critical of one another in recent weeks as the pair have appeared increasingly like the two frontrunners in the race. Warren last week released a bankruptcy plan, indicating she might go after Biden on a bankruptcy bill he advocated for in 2005. Tensions have been simmering between Warren and Buttigieg for months, and Klobuchar has also trained her fire on Buttigieg in recent debates. Steyer has largely avoided much direct conflict — he knows he’s a long shot, and honestly, he’s probably just happy to be there.