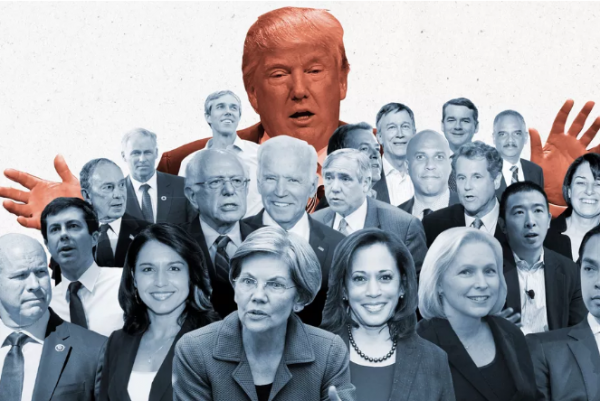 The first Democratic presidential debate is finally here. The two-night event will take place from 9 to 11 pm Eastern on Wednesday and Thursday in Miami, and will air on NBC, MSNBC, and Telemundo. We’ll also embed a live stream here once it’s available.

This is the first time Democratic candidates will get to square off on the same stage. But they won’t all debate together: A different set of 10 candidates will be featured on each night.

On Wednesday, the first night of the debate, Elizabeth Warren, Beto O’Rourke, Cory Booker, and Amy Klobuchar will be the leading candidates participating. Warren will likely be the main attraction here, as she’s had a bit of a bump in polls of late.

Then on the second night, Thursday, Joe Biden, Bernie Sanders, Kamala Harris, and Pete Buttigieg will be the most notable contenders in the roster. They also happen to be four of the five top-polling candidates overall, with Biden remaining the clear frontrunner — which makes him a potential target.

Additionally, a dozen other candidates currently polling around the 1 percent level — some senators, some members of Congress, and some who have never held elected office — will all be trying to take advantage of this national platform to better stand out in the field.

After months of campaign announcements and early campaigning, the first debate begins a new phase in the Democratic nomination contest — and in particular, it marks the first high-profile test for frontrunner Joe Biden.

Where the Democratic race stands before the first debate

Joe Biden is winning — but he’s facing tougher attacks: There are 25 at least somewhat notable Democratic candidates in the race, 20 of whom qualified for the first debate. But there’s just one who is indisputably the man to beat: Joe Biden. The former vice president has led nearly every national and early state poll so far this year, and he’s currently ahead by 15 percentage points in the RealClearPolitics national poll average.

Many Democratic voters perceive Biden as the most “electable” candidate (an assessment that is generally backed up by polls pitting the candidates against President Trump). They may also have fond memories of the Obama administration and view Biden as next in line. Yet certain aspects of Biden’s political persona fit uncomfortably with a changing Democratic Party, and those problems came to the fore last week.

At a recent fundraiser, Biden reminisced about how he used to be able to work productively with segregationist senators (in contrast to today’s lack of “civility”). The comments sparked criticism from several candidates, including Cory Booker, who called on Biden to apologize. Biden also has been much more skeptical of the “class warfare” economic message candidates like Bernie Sanders and Elizabeth Warren have embraced — and at the same fundraiser, he told wealthy donors that though “income inequality” needs to be addressed, “nothing will fundamentally change” for them during his presidency.

These are just the latest of many examples in Biden’s career where his mouth has gotten him into some trouble. Separately, there are also questions about Biden’s age: He’s 76, and would be 78 years old by inauguration day 2021. So the first debate is an important moment for him — it presents both an opportunity to put these various fears to rest and a high-pressure setting in which he could make yet more problems for himself.

Sanders, Warren, Harris, and Buttigieg are the rest of the top tier: Beyond Biden, four other candidates have emerged from the pack in polls so far.

A whole lot of other candidates are trying their luck: Finally, one thing the debate will make unmistakably clear is that there are a lot of Democrats in this race. The combination of Trump looking beatable, Biden not being an overwhelmingly dominant frontrunner, and Trump’s own surprising outsider win has spurred many Democrats to wonder: Why not me? Lenient qualification standards have let nearly all of them get into the first debate, and now they’re all hoping to have some sort of “moment” that will send them into the top tier.

The debate night rosters and dynamics

Knowing that the field of candidates would be enormous, the DNC tried to avoid repeating Republicans’ example in 2015, when they featured a primetime debate of the top-polling candidates and an earlier “kiddie table” debate with those polling worse.

So the DNC separated the candidates into groups — those polling at 2 percent or above, and those below that level. They ensured each group would be split equally among the two nights, and then held a random drawing to see which candidates would be on each night.

Now each of these debate nights will be two hours long, with 10 candidates onstage. If speaking time is split equally among every candidate, they’d get just 12 minutes each — and that’s before taking out time for the moderators and for breaks. So time is precious, and the contenders will struggle to make every moment count.

The first night: Warren, O’Rourke, Booker, Klobuchar, and the rest 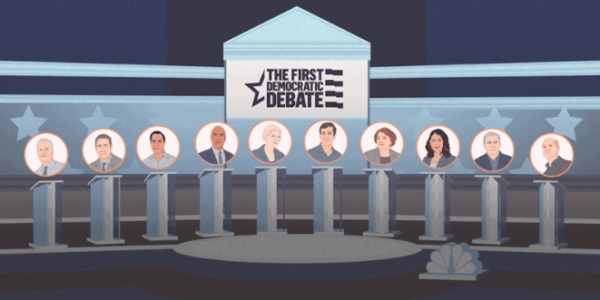 Arranged from left (with the best-polling candidates in the middle), the lineup for Wednesday night’s first debate is:

Warren is the only one of the top five candidates who ended up being assigned to this night of the debate. As a result, she can’t take on her most prominent rivals face to face — but she will have a major opportunity to stand out.

Still, it’s not like she’s facing a group of slouches. O’Rourke and Booker are both compelling speakers, and Booker has been in the news due to his criticism of Biden. Klobuchar has a reputation for bipartisanship. Inslee is focusing his campaign on climate change, while Gabbard is critiquing US foreign policy, and Castro has put out a flurry of his own policy proposals. Without most of the top contenders there to take up time, it could be easier for a lesser-known contender to get some attention.

The second night: Biden, Sanders, Harris, Buttigieg, and the rest

Again, from left, the lineup for the second debate night is:

Due to the luck of the draw, this is effectively the marquee night for the debate — with frontrunner Biden, second-place Sanders, and tied-for-fourth-place Harris and Buttigieg all onstage.

And all eyes will be on Biden. He’s certainly no stranger to the format — his first presidential debate was 32 years ago, and he was in several more during his 2007 campaign, as well as general election vice presidential debates in 2008 and 2012. Still, as the clear frontrunner, the pressure will be on, and his rivals will be sure to pounce on any misstep.

Sanders, for instance, will have an opportunity to make the case that his vision for the presidency would be far different — he wants a “political revolution,” whereas Biden emphatically does not. Harris and Buttigieg, too, could argue that new leadership is needed for the party. But it’s not clear just how aggressive these candidates will be in attacking Biden; they could decide it’s a mistake to go too negative this early.

The two Democratic candidates without experience in political office will also be onstage on this night. Marianne Williamson, an author who has written books about spirituality, has recently tried to backtrack from comments she made criticizing vaccines. Meanwhile, entrepreneur Andrew Yang will tout his plan for a universal basic income of $1,000 a month. With most of the top-polling contenders as well as Williamson and Yang on this night, it may be more difficult for the other politicians onstage — Gillibrand, Bennet, Hickenlooper, and Swalwell — to stand out.

The second Democratic debate, on July 30 and 31, will be a similar two-night affair, with similar qualification rules.

But after that, the DNC has said, it’s raising the bar. Candidates will have to hit 2 percent in at least four polls, and they’ll also have to have 130,000 unique donors. The donor threshold in particular will be challenging for many candidates who currently don’t have national followings. So the third debate could well have a far smaller lineup.

This week, though, almost everyone will get a chance to go onstage and make their case — for a few minutes, at least.