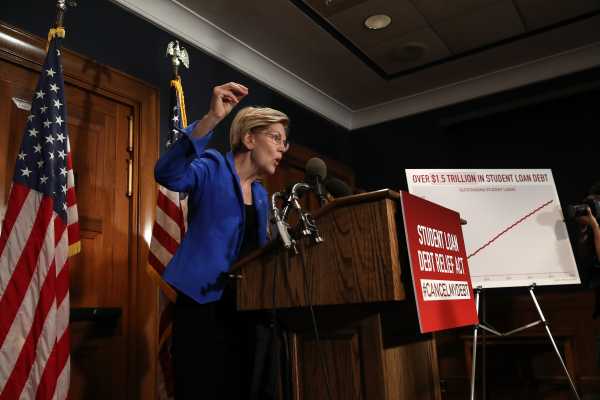 Tucked into the $1.9 trillion stimulus package is a provision that makes forgiven student debt tax-free. It ups the pressure for President Joe Biden to cancel student debt, but it is also a big deal for many borrowers regardless.

The provision, added to the Covid-19 relief bill by Senate Democrats and championed by Sens. Bob Menendez (D-NJ) and Elizabeth Warren (D-MA), says that anyone whose student loans are discharged through 2025 won’t face tax consequences. Debt cancellation is usually treated as taxable income, so without this, if someone were to have some or all of their student debt forgiven, it would be accompanied by a tax bill.

While student debt forgiveness used to be a pretty fringe idea, it’s become much more mainstream in recent years as student debt in America has grown. Currently, some 45 million borrowers owe $1.7 trillion in student loans.

One big question in the background has been whether, if some forgiveness happened, people would face taxes. The stimulus package moves that hurdle out of the way.

While the political impetus to get this tax provision into the relief bill may have been broad-based forgiveness, this is a fix that many policy experts have long been advocating for and believe needs to be made permanent. Many student loan borrowers are on income-driven repayment plans, where they make payments on their loans based on their incomes and then after 20 or 25 years, those loans are forgiven. Not many borrowers have hit that 20- or 25-year limit yet, but when they do, without making forgiveness tax-free, they’ll be taxed.

“Primarily, this was aimed at making a fix that was essentially aimed at knocking down that potential barrier to administrative action on broader debt cancellation … but it has spillover effects that are important,” said Jessica Thompson, associate vice president at the Institute for College Access & Success. “It’s just the right policy.”

Tax liability for forgiven student debt has been determined in an awkward, uneven way. In some circumstances, the IRS considers forgiven loans taxable income; in others, it does not.

Loans forgiven under the Public Service Loan Forgiveness program, which forgives debt after people make 10 years of payments while working in certain public service jobs, are not considered taxable. However, loans forgiven under income-driven repayment are. Not a lot of people have qualified for forgiveness under those types of programs yet, because the programs haven’t been around for long enough, but as more people do start to qualify, the tax issue is looming.

“We’re still in the very beginning of folks coming into that forgiveness period,” Thompson said. “But there are over 8 million people in these plans now, so that number is just going to grow and grow and grow. We’re going to start seeing examples of people getting tax bills.”

It’s not hard to see why that would be a problem: Many of the people spending two decades on paying back loans are not high-income. “They are people whose balances have been growing because they don’t even make enough to cover their interest payments,” Thompson said.

The Obama and Trump administrations both found ways to make sure loans discharged for people who went to colleges that committed fraud or closed weren’t taxed. It’s likely the Biden administration would have taken similar action, but now with the stimulus bill, this makes the tax guidance much clearer.

The new proposed rule builds on a tax provision included in the 2017 tax bill that Republicans passed, which scrapped tax liability for student debt forgiven because of disability or death. That also expires at the end of 2025. Many experts hope that set a precedent for making all student loan forgiveness tax-free to become permanent law.

This removes a roadblock — and gives Biden a nudge

Prior to the tax fix, some experts believed the federal government could find some workarounds on making forgiveness tax-free if it wanted to, though there was hardly widespread agreement on the matter. Now Democrats have shut down this part of the wider student debt debate.

President Biden has been adamant that he’s not interested in canceling student debt on his own through executive action and would like for Congress to forgive $10,000 of debt. If Congress were to act, this new provision would apply. But many Democrats are also using it to urge Biden to act on his own and cancel up to $50,000 in student loans.

Both Menendez and Warren made clear after the Covid-19 relief bill passed that the point is to smooth the path for Biden to take action.

The student debt forgiveness debate isn’t going away, and the pressure on the White House to do something is building.

Liz Cheney pays the price for taking on Trump