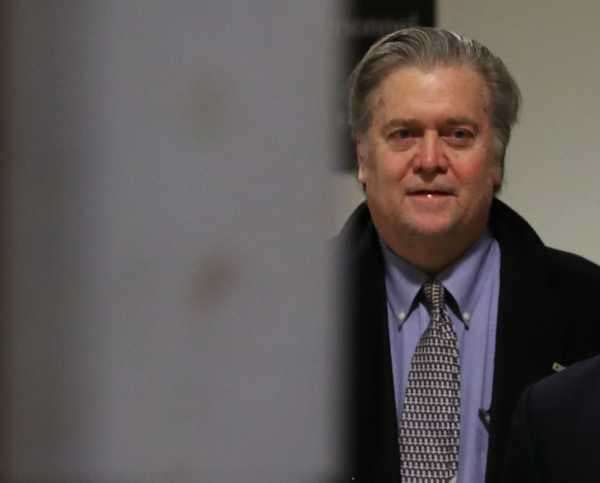 The former White House chief strategist reportedly planned to sit down with Mueller’s team sometime before the end of January. Mueller subpoenaed Bannon to testify before a grand jury earlier this month, but the special counsel later agreed to question Bannon in a less formal setting. (He may in fact have done so already, but there’s been no confirmation of that yet.)

The sit-down comes at an interesting time for Bannon. After he was quoted darkly opining about the Trump family’s culpability in the Russia investigation in Michael Wolff’s book Fire and Fury, he was disowned by Trump and his family and lost his job at Breitbart News.

Despite that falling-out, though, Bannon refused to answer key questions in closed-door congressional testimony on January 16, saying he was abiding by a White House privilege request. Yet Bannon’s lawyer has put out the word that he won’t use the same excuse with Mueller, thus creating anticipation for what a Bannon estranged from the White House might tell the special counsel’s team.

Interestingly, however, the Daily Beast’s Betsy Woodruff reported that Mueller’s team hadn’t indicated any interest in questioning Bannon until after Fire and Fury came out. Perhaps they would have ended up interviewing him anyway. But there are a few particular passages in the book that may have caught Mueller’s attention.

1) Does Bannon know anything about Don Jr.’s Trump Tower meeting — or was he just running his mouth?

Bannon didn’t join Trump’s presidential campaign until mid-August 2016. So it didn’t initially seem likely that he could shed any light on events before that that have drawn the special counsel’s scrutiny — for instance, the June meeting that Donald Trump Jr. set up with a Russian lawyer in hopes of getting dirt on Hillary Clinton.

Yet perhaps the biggest revelation in Fire and Fury was that Bannon is quoted saying he thinks there’s more to the story of that meeting than we know so far — and that Donald Trump himself was likely involved in it.

As a recap: All the participants in this infamous meeting, from both the Trump side and the Russian side, have claimed that it was brief, unproductive, and led to nothing of substance. There’s been no information tying Trump Sr. to it in any way, and the president has said he didn’t learn about it until more than a year later.

However, Wolff quotes Bannon saying: “The chance that Don Jr. did not walk these jumos up to his father’s office on the twenty-sixth floor is zero.” Another Bannon quote reads, “They’re going to crack Don Junior like an egg on national TV.”

Mueller has reportedly been investigating the meeting for collusion reasons (he’s trying to find out what exactly happened between the Trump team and Russia) — but also for obstruction of justice reasons. The latter focus is because during an Air Force One flight last summer, President Trump himself helped craft the highly misleading (and almost immediately disproven) public statement Don Jr. released about the meeting.

So when Bannon, who was so close to the president, is quoted opining that Trump’s team is hiding the truth here … it’s worth asking him why he thinks that.

Now, according to a recent report by Axios’s Jonathan Swan, when Bannon recently testified to the House Intelligence Committee, he suggested that his quotes to Wolff on the matter were mainly “speculating.” That wouldn’t be entirely out of character for Bannon, who’s known to have a rather conspiratorial worldview.

But Bannon also revealed that he’d discussed the matter at the time with Reince Priebus and Sean Spicer — and, perhaps most interestingly, with Mark Corallo, who briefly served as a spokesperson for Trump’s legal team in mid-2017, before suddenly exiting.

Wolff’s book claims, with vague sourcing, that Corallo “quit” after “privately confiding that he believed the meeting on Air Force One represented a likely obstruction of justice.” Why did Corallo believe that, and whom did he confide his concerns in? (Could he perhaps have confided in the obvious source for much of Wolff’s book — Bannon?)

2) What does Bannon know about Trump’s decisions to fire Michael Flynn and James Comey?

According to the Washington Post, Mueller’s team has indicated it would like to question President Trump about the events surrounding his firings of National Security Adviser Michael Flynn and FBI Director James Comey.

Here’s the timeline of events around Flynn:

And Bannon was around for many of these events:

As for Trump’s later decision to fire Comey, Bannon did not travel with Trump during the fateful May weekend when the president is said to have made his decision. However, he was involved in meetings before and after that weekend at which the possibility of firing Comey was discussed. One of these, in Wolff’s recounting, went as follows:

3) Why does Bannon reportedly think Jared Kushner is at risk in the Russia investigation?

Finally, there’s one other interesting tidbit about Bannon and the Russia investigation in the Wolff book — the claim that he pointed reporters toward Jared Kushner.

Indeed, throughout Fire and Fury, Wolff’s sources paint Kushner as perhaps the driving force behind Comey’s firing. For instance:

Bannon himself is later quoted speculating that Kushner’s family real estate company could be vulnerable to money laundering charges. “The Kushner shit is greasy,” he says. Later, he elaborates:

So was all this a baseless attempt to smear an internal rival? Was it speculation based purely on what Bannon has read in the newspapers? Or did Bannon have a better reason to point the finger at Kushner than we know of so far?