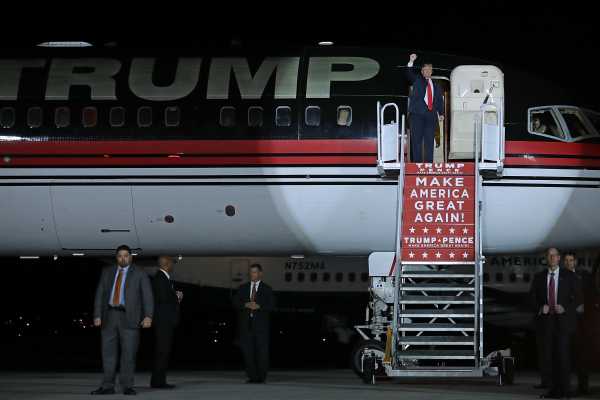 President Donald Trump brought on his daughter and son-in-law as two of his top advisers and enlisted — and then fired — former The Apprentice contestant Omarosa Manigault to serve in the White House. So why not tap his personal pilot to run the FAA?

Trump is considering appointing John Dunkin, his longtime personal pilot, to head the Federal Aviation Administration, according to a report from Axios late Sunday. The Washington Post later confirmed that Dunkin, who flew the president’s Boeing 757 during the 2016 campaign, is “in the mix” for the job. The FAA oversees airports, air-traffic organization, aviation safety, and commercial space transportation, a $16 billion budget, and 47,000 employees.

According to Axios, Rep. Sam Graves (R-MO) and acting FAA Administrator Dan Elwell are also on the shortlist for the position.

Trump bragged about Dunkin in a meeting with the aviation industry in February 2017, calling him a “smart guy” who “knows what’s going on.” He lamented “bad equipment” at airports because of regulatory barriers. “I have a pilot who’s a real expert, and he said, ‘Sir, the equipment they’re putting on is just the wrong stuff.’ And we’ll talk about that. Because if we’re going to modernize our systems, we should be using the right equipment,” he said.

He asked if then-FAA Administrator Huerta, who stepped down at the start of 2018, was a pilot. “I think it maybe would be good to have a pilot, like a really good pilot who knows what’s going on,” he said.

An unnamed administration official told Axios that Dunkin, Trump’s pilot, “isn’t just a pilot” but instead has a wealth of experience that would qualify him for the job, which requires Senate confirmation. “He’s managed airline and corporate flight departments, certified airlines from start-up under FAA regulations, and oversaw the Trump presidential campaign’s air fleet, which included managing all aviation transportation for travel to 203 cities in 43 states over the course of 21 months,” the official said.