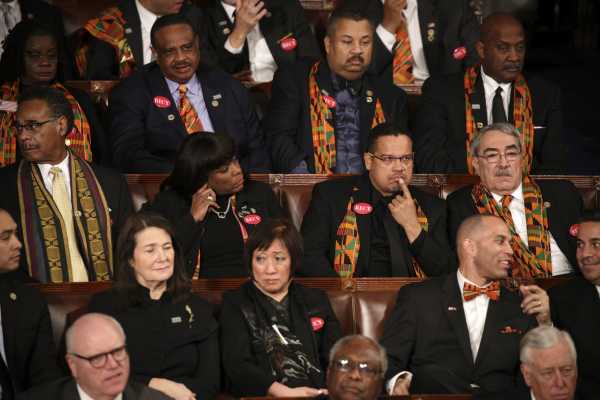 During Tuesday night’s State of the Union address, President Donald Trump once again heralded the black unemployment rate, which, at 6.8 percent nationally, is at its lowest level since the Bureau of Labor Statistics first began breaking unemployment numbers down by race in the 1970s.

“Unemployment claims have hit a 45-year low,” Trump said. “And, something I’m very proud of, African-American unemployment stands at the lowest rate ever recorded,” he added to applause.

This isn’t the first time that Trump has highlighted the drop in black unemployment. In recent weeks, Trump has repeatedly touted the unemployment numbers, which were released earlier in January by the Bureau of Labor Statistics. The numbers found that in December, the unemployment rate held steady at 4.1 percent for Americans of all races. Among black Americans, the numbers fell to 6.8 percent unemployment, the lowest rate recorded since the BLS began breaking down the numbers by race in the 1970s.

Trump said he’s particularly proud of that drop, sending his first tweet about the lower black unemployment numbers shortly after they came out. “The African American unemployment rate fell to 6.8%, the lowest rate in 45 years. I am so happy about this News!” he tweeted on January 6. He tweeted about it again on January 8, mentioned it during his speech before the American Farm Bureau Federation’s annual convention that same day, and has also retweeted at least one other account that noted the black unemployment numbers hit a historic low during his tenure.

He tweeted about them again on January 16. “Black unemployment is the best it’s ever been in recorded history,” Trump said during a Tuesday appearance with President Nursultan Nazarbayev of Kazakhstan. “It’s been fantastic.”

Trump also recently called out Jay-Z when the rapper noted that the drop in black unemployment did not mitigate the effects of the president’s policies on the black community.

But before Trump’s proud tweets, he made headlines for for reportedly calling parts of Africa, Haiti, and El Salvador “shithole countries,” only to then express interest in getting more immigrants from countries like Norway. His comments fit a pattern in which he has long engaged, of seeking to deflect racial criticisms by turning to his work with another racial group. Trump’s aides have also touted the numbers, attributing the decline to the economic policies pursued by the president during his first year in office.

Trump is certainly right that black unemployment hit a historic low in December 2017, not only falling to its lowest level since the Great Recession but falling below 7 percent for the first time since the statistic began being recorded. Given that black unemployment hit a high point of around 16.7 percent in August 2011 as the country recovered from the Great Recession, the new number is ostensibly good news. But exactly how much progress the new 6.8 percent number reflects, and what role Trump played in getting it there, isn’t exactly what the president says.

Since Trump first took credit for the lower unemployment rates earlier this month, journalists and economists have noted that he isn’t really the cause of the decline. Unemployment among black Americans has been declining pretty steadily after coming close to 17 percent in 2011. Over at the Washington Post, Philip Bump points out that unemployment numbers for black Americans have fallen relatively consistently for the past several years. By the time Trump entered the Oval Office in January 2017, the black unemployment rate was at 7.8 percent.

“From January to December 2017, the unemployment rate among black Americans fell 1 percentage point,” Bump explains. “During the same period in 2016, it fell the same amount. In 2015, it fell 1.9 points. The previous year, it fell 1.5 points. The year before that, it fell 1.8 points.”

Jared Bernstein, a senior fellow at the Center on Budget and Policy Priorities and a former economic adviser to Vice President Joe Biden, says Trump can’t really take credit for this trajectory. “Trump has had nothing to do with the decline in African-American jobless rates, or any other group’s rates,” Bernstein told Vox in an email Wednesday. “He’s completely riding a trend he inherited.”

Instead, Bernstein credits the actions of Federal Reserve Chair Janet Yellen, who oversaw a steady period of declining unemployment numbers and kept interest rates suppressed instead of raising them as soon as the unemployment numbers fell, a move that helped drive unemployment down further. Yellen was frequently criticized by the GOP and then-candidate Trump, who argued on the campaign trail that the unemployment rate was a “phony number.” (Yellen resigned from her post last year after Trump declined to appoint her for a second term.)

Janelle Jones, an analyst with the left-leaning Economic Policy Institute, agrees. “These are the results of good previous policy that lead to economic growth,” she told Vox. “The recovery of employment was happening long before Trump got into office.”

This isn’t a new trend — historically, black unemployment rates have typically been much higher than that of other groups, and often double that of whites. Even as black unemployment trends downward, the gap remains proportionally the same. “While it’s true that the most recent jobs report shows that the gap has narrowed a little, its existence still points to troubling discrepancies in the labor market that can’t all be explained away by differences in education and skills,” the Atlantic’s Gillian White wrote earlier this month.

Jones adds that while the new black unemployment rate is “positive news,” it shouldn’t be taken as evidence that black Americans are completely succeeding in the job market. “An unemployment rate of nearly 7 percent is nothing to cheer about. If the white male unemployment rate was 6.8 percent no would think this is great news,” she says. “We don’t get to set a very low bar for economic success for black workers and then applaud ourselves when we reach it.”

Prior to Trump’s State of the Union address, members of the Congressional Black Caucus also noted that Trump was wrong to claim credit for the drop.

“He’s standing on the back of the success of President Obama and his economy,” Richmond added.

Research suggests that there’s no single cause for the gap between white and black unemployment. A common argument is that the effects of racial bias and discrimination play a role in hiring, causing African Americans to be passed over for jobs. Others point to the differences in education levels between the races as a factor, although since black Americans with higher levels of education have had unemployment levels similar to those of their less educated white peers, it is unlikely that education accounts for much of the difference.

And since the unemployment rate doesn’t measure true unemployment, instead focusing on those who are out of work but still looking for a job, some economists — like the Economic Policy Institute’s Valerie Wilson — suggest that the gap may be partially attributable to a higher number of African Americans staying in the job market for a longer period of time, a phenomenon dubbed the “resilience factor.” Meanwhile, a June 2017 paper released by the Federal Reserve found that black and Hispanic Americans were more likely to face job loss than whites, putting more of them in the unemployment pool.

Jones says that a better measure of black recovery is the employment-to-population ratio (or EPOP), which compares the number of working-age adults employed to the larger working-age population. Looking at black Americans specifically, Jones notes that this number still lags behind where it was in the 1990s.

There’s also the issue of exactly how many African Americans might be missed in the unemployment numbers altogether. The BLS figures usually focus on those who are not employed but are looking for work, a number that does not include those who have stopped seeking employment.

The figure also does not count incarcerated individuals, a large group not in the workforce. As Jeff Guo noted in a 2016 Washington Post analysis, due to the disproportionate number of African Americans incarcerated, the absence of this group could have a particularly large effect on the unemployment numbers should they be counted.

Official statistics are “very deceptive when the trends in the fraction incarcerated are changing,” Derek Neal, an economist at the University of Chicago who has looked into how mass incarceration and the economy are connected, told Guo in 2016. “You can actually measure an increasing employment rate or a falling unemployment rate simply because, over this period, we’ve put more of the people who have trouble finding jobs in prison.”

These are all complicating factors to the narrative presented by simply touting lower unemployment numbers, factors suggesting that more policies aiding black Americans and the economically vulnerable are needed. Bernstein from the Center on Budget and Policy Priorities says that those policies may be tough to find under a Trump administration. “What’s particular[ly] dissonant in Trump’s case is his claiming credit for the [African-American] jobless rate while trying to move legislation and a budget that is uniquely damaging to economically vulnerable workers,” he says, pointing to the administration’s moves on health care and tax policy.