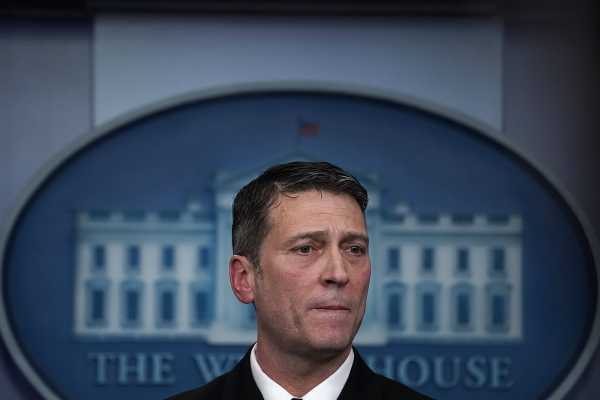 If Ronny Jackson, President Donald Trump’s nominee to the Department of Veterans Affairs, is confirmed to the Cabinet job, he’d be charged with helping reverse an opioid epidemic that the VA fueled in the past.

But it turns out that at the White House, Jackson may have helped perpetuate a key cause of the crisis.

Nicholas Fandos at the New York Times on Wednesday reported that Jackson, who is currently the top White House doctor, had “provided ‘a large supply’ of Percocet, a prescription opioid, to a White House military office staff member, throwing his own medical staff ‘into a panic’ when the medical unit could not account for the missing drugs, according to a summary of questionable deeds compiled by the Democratic staff of the Senate Veterans’ Affairs Committee.”

This is just the latest of many accusations against Jackson, who was accused of drinking on the job and overprescribing non-opioid sleeping medications. With the new accusation, it seems that Jackson’s alleged penchant for overprescribing extended to opioids too.

This would be bad for any doctor. But it’s particularly bad for Jackson, given the role the VA played in causing the opioid crisis in the first place — and the task it now faces in helping end the epidemic.

In the 1990s, doctors — under the urging of advocacy groups, pharmaceutical companies, and government agencies — began prescribing a tremendous amount of opioids. The proliferation of the potentially deadly, addictive drugs made opioids available not just to patients but also to friends and family with whom patients shared drugs, teenagers who rummaged through their parents’ medicine cabinets, and a black market in which excess opioids could be sold for a huge markup.

The VA, which oversees the nation’s largest integrated health care system in the Veterans Health Administration, played a big role in initially creating this crisis. It promoted the idea that pain should be treated as “the fifth vital sign,” which led doctors at veterans hospitals and elsewhere to ask patients to rate their pain — pain that was then treated with opioids.

Over time, the epidemic has expanded to other opioids, particularly heroin and fentanyl, as people addicted to the drugs have pursued a stronger high, as crackdowns on painkillers led patients to pursue alternatives, and as the general increase in demand for opioids led drug dealers and traffickers to flood the country with illicit opioids, making them more available and accessible than before.

But the root cause was the initial proliferation of opioid painkillers, which led many to misuse and get addicted to the drugs.

There was very little evidence for the prescribing push embraced by the VA and other health systems. A growing body of evidence has shown that opioids are generally not good treatments for chronic pain and at least some acute pain, although the drugs do work for some individuals. A 2006 study published in the Journal of General Internal Medicine concluded that “[r]outinely measuring pain by the 5th vital sign did not increase the quality of pain management.”

At the same time, there has long been evidence that opioids can be addictive and dangerous — which is why the Centers for Disease Control and Prevention has urged doctors to be cautious and balance the negatives with the positives when prescribing opioids to patients.

As the opioid epidemic became the deadliest drug overdose crisis in US history, the VA has tried to become a leader in undoing the kinds of policies that got America into this mess to begin with. The Veterans Health Administration, for example, has an Opioid Safety Initiative that tries to get medical providers under its purview to better balance the risks and benefits of these drugs.

Sen. Jon Tester (D-MT), who’s on the Veterans Affairs Committee, released a two-page summary of the full accusations against Jackson. According to the summary, Jackson was known as the “Candyman” because “he would provide whatever prescriptions they sought without paperwork.” Although the allegations initially involved Ambien and Provigil, neither of which is an opioid, the new allegations involve “a large supply” of Percocet. Jackson also allegedly had “private stocks of controlled substances,” “wrote himself scripts,” and “prescribed medications when other physicians would not,” the allegations claim.

Jackson has denied at least some of the allegations, saying he will still pursue the top job at the VA.

But if the accusations are true, they lead to one question: If Jackson treated controlled substances like this as a doctor, how can he be trusted to curtail these drugs’ use as the head of the VA?