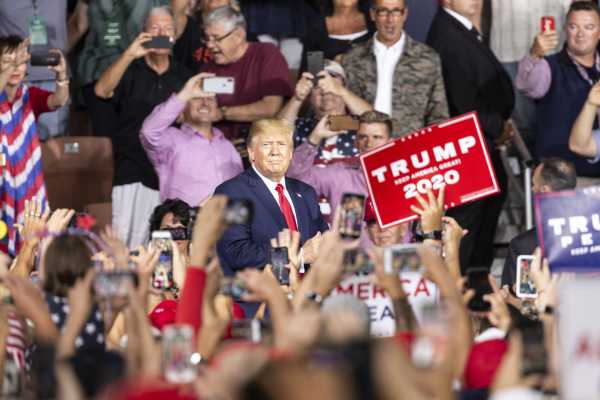 Late Friday night, President Trump continued his obsession with crowd size, tweeting not once, not twice, but thrice about the size of the crowd at his rally in New Hampshire the previous day. The tweets seemingly came in response to a trending hashtag that claimed the arena was not as packed as the president had boasted.

“Placed was maxed out, totally packed, with thousands coming to the arena floor at start,” the president tweeted. “Thousands more outside that were not allowed in per code. Energy was really great to see.”

A minute later, Trump tweeted a photo of the crowd at the rally, and demanded that his followers “Look at the tremendous overflow at packed arena in New Hampshire last night.”

And then 25 minutes after that, Trump tweeted that he had broken a crowd record at the Southern New Hampshire University Arena, where the rally took place.

“Biggest crowd EVER, according to Arena people. Thousands outside trying to get in. Place was packed!” Trump tweeted about the Manchester, New Hampshire stadium. “Radical Left Dems & their Partner, LameStream Media, saying Arena empty. Check out pictures. Fake News. The Enemy of the People!”

Trump’s polemic against the media likely referred to a viral tweet that incorporated a clip of MSNBC’s coverage of his New Hampshire speech; in the clip, a number of empty seats can be seen.

By Friday evening, more than 70,000 tweets with the the hashtag #EmptySeatMAGATour, many of them with links to similar video footage and photos apparently showing empty seats at Trump’s rally, had pushed the hashtag to the top of Twitter’s trending topics.

Trump’s tweets were in fact reiterations of a claim he made the day before, in which he bragged about breaking the record at the arena previously held by singer Elton John.

Despite the empty seats, it would appear he did indeed break the musician’s record — Manchester’s deputy fire marshal told the Daily Mail that a little more than 11,500 people were in the arena to hear the president speak; John had a few hundred less at his performance at the venue.

However, if the fire marshal’s count was correct, Trump still would have had some empty seats. The Hill reports the venue has a capacity of 11,770, which would make Trump’s assertions of having had a record breaking audience and his critics’ claims that he failed to fill the arena both true. The marshal also told the Mail the president had about 8,000 people fill the overflow space.

Holding the new attendance record alone did not seem to be enough for Trump, however. A quick scan of his timeline shows that on Thursday he actually tweeted or retweeted remarks about the size and enthusiasm of the crowd at his rally at least five times.

In summary: That makes eight tweets about his crowd size in 24 hours — not including several more tweets showing flattering video footage and photos of the crowds without explicit text about the size of them.

Trump has been obsessed with crowd size for a long time

Even the most casual observer of Trump knows he has an obsession with talking about crowd size. He can be wildly unpredictable on policy, but he’s remarkably consistent in his dedication to talking about how big of an audience he can draw.

As some analysts point out, Trump seems to delight in working a big crowd because his rallies serve as a kind of therapeutic escape from the daily grind of politics. But his relentless public emphasis on the size of his audiences in fact serves a deeply political function: his crowds offer a tangible display of popularity even when his poll numbers are low.

Trump’s obsession with crowd size as president started the very day he was sworn into office.

Photos and video footage of Trump’s inauguration in 2017 showed that the National Mall was notably empty during the swearing in; crowd scientists estimated that Trump drew an audience about a third of the size of Barack Obama’s inauguration in 2009.

But immediately after the inauguration, then-White House Press Secretary Sean Spicer insisted that Trump had drawn “the largest audience to ever witness an inauguration, period.”

Conway’s tortured defense of the administration’s false claims about the crowd did not, however, deter Trump from continuing to propagate the myth that he had the biggest inauguration crowd ever; for instance, he told ABC News in 2017, “They were showing pictures that were very unflattering, as unflattering — from certain angles — that were taken early and lots of other things. I’ll show you a picture later if you’d like of a massive crowd.” It was later reported that Trump personally directed a government photographer to edit inauguration photos to make the ceremony appear more crowded than it was.

While some critics perceived Trump’s fixation on the matter as egoistic pettiness, it’s important to understand why Trump considered it a worthwhile political talking point.

In the run-up to the inauguration, polling indicated that Trump was the least popular president-elect in decades. And the day after Trump’s inauguration, millions of Americans took to the streets for the Women’s March in what is estimated to be the largest single-day demonstration in recorded US history. Arguing about crowd sizes — which is a fuzzy science prone to visual manipulation — offers Trump terrain for contesting official media narratives about his unpopularity and allows him to claim a bigger mandate than he has.

In New Hampshire, for instance, Trump has a 57 percent disapproval rate as of July, according to Morning Consult; but being able to draw a crowd of roughly 19,500 people gives the appearance of popularity.

It’s a formula Trump has repeated countless times as he’s struggled to deal with low approval ratings. He has also employed it in the face of controversy, like as he faced questions surrounding special counselor Robert Mueller’s probe into his presidential campaign’s ties with Russia.

And as was the case during his inauguration, Trump remains willing to lie about his attendance numbers to bolster his image as a popular politician. During a rally in Houston in October, Trump claimed that 50,000 people were watching the event right outside the arena. But Houston Police Chief Art Acevedo said that only 3,000 were, according to Newsweek.

Newsweek also reported that last September, during a rally in Springfield, Missouri, Trump said that there were 45,000 people stuck outside of his event trying to get in, but the city’s public information officer said there were just 1,000 people outside.

Trump has also not hesitated to talk up crowd sizes even in tragic situations where political point scoring is typically considered uncouth.

While visiting Texas in the wake of Tropical Storm Harvey in August 2017, Trump stood on a platform and proudly exclaimed, “What a crowd, what a turnout.”

Most recently, when visiting a hospital that was treating victims of the El Paso shooting, Trump decided to use it as an opportunity to talk about how large his crowd was during a rally at El Paso several months earlier, and how much smaller Democratic presidential candidate Beto O’Rourke’s counter-rally was.

“That place was packed. … That was some crowd. And we had twice the number outside. And then you had this crazy Beto. Beto had like 400 people in a parking lot, they said his crowd was wonderful,” Trump said.

With statements like these, Trump works to renew his political mandate and fend off claims that he’s crippled by controversy. And by using social media, he can block out the noise and the media narratives about how he is one of the least popular presidents in modern history, instead showing with seemingly irrefutable photographic evidence that he commands a large, enthusiastic following.

That enthusiasm is important: It is a crucial part of generating voter turnout — enthusiasm helped Democrats win the House in 2018 — and it’s going to be especially crucial for Trump’s reelection chances in 2020.