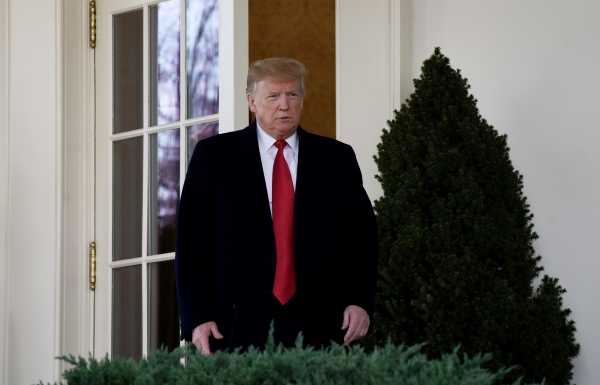 What a difference a day makes.

Late Thursday morning, President Donald Trump posted a defiant tweet in which he suggested the government shutdown would not end unless Congress gave him money for a border wall.

“We will not Cave!” Trump wrote.

Speaking to reporters in the White House later that same day, Trump indicated he would not sign a short-term funding bill unless it included a “prorated down payment for the wall.”

But barely 24 hours later, Trump caved: On Friday afternoon, the president announced he would sign a bill to reopen the government until February 15 — a bill that wouldn’t include any money for his border wall, “prorated down payment” or otherwise.

Trump made the announcement during a Rose Garden speech that concluded with him vowing he will still get his wall, one way or another.

“We really have no choice but to build a powerful wall or steel barrier,” Trump said. “If we don’t get a fair deal from Congress, the government will either shut down on February 15, again, or I will use the powers afforded to me under the laws and the Constitution of the United States to address this emergency.”

Trump’s reference to “the powers afforded to me” suggests he may declare a national emergency in hopes of bypassing Congress to secure funding for a border wall. As Vox’s Emily Stewart has explained, few people doubt that Trump has the power to declare an emergency, but whether he could leverage one into securing funding for a wall is another question.

Trump’s case won’t be helped by the fact that he’s already admitted his emergency declaration would be a response to a political outcome that’s unsatisfactory to him — not conditions at the southern border.

Between now and February 15, a bipartisan conference committee will try to reach an agreement on a border security plan. House Speaker Nancy Pelosi (D-CA) has repeatedly stated that she won’t support Trump’s wall, which she’s described as “immoral, ineffective, and expensive.” But as my colleague Tara Golshan has detailed, Democrats have left the door open to supporting some sort of “physical barriers” along the border.

During a news conference following Trump’s announcement, Pelosi didn’t directly answer a question about whether she would “accept any sort of physical barrier as part of a border security plan,” but she suggested she’s more concerned about security at ports of entry.

“The president talks about drugs coming into our country,” she said. “90 percent of the drugs come through ports of entry. Let us increase the infrastructure where the drugs are coming.”

During the same news conference, Senate Minority Leader Chuck Schumer noted that “Democrats are firmly against the wall,” but he added that “we in Congress will roll up our sleeves and try to find some agreement on border security.”

The White House, meanwhile, posted an evidence-free tweet from its official account claiming, “Dozens of rank-and-file Democrats have reached out to the Administration and signaled they are willing to provide wall funding if the Government reopens.”

(Earlier this week, 30 Democrats urged Pelosi to promise Trump he would get a vote on legislation that would fund the wall if he reopened the government, but there’s no evidence they “are willing to provide wall funding.”)

Trump hasn’t let the fact that Congress has appropriated no money for his border wall stop him from misleadingly claiming it’s under construction anyway. If Pelosi and Schumer’s comments are any indication, barring an emergency declaration, he may have to resort to the same tactics moving forward if he wants his supporters to believe that he’s actually realizing one of his signature campaign promises — even if his original vow that Mexico will pay for it is a distant memory.