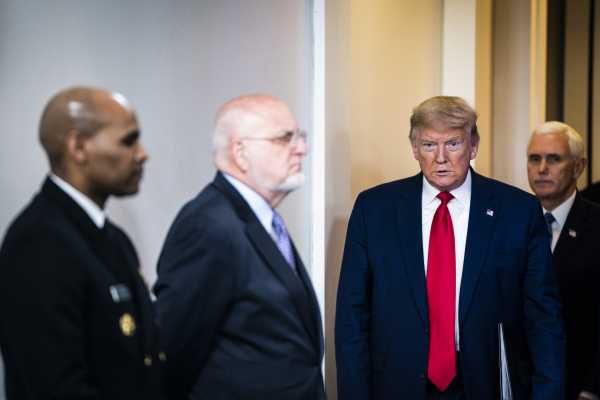 On Friday evening, President Donald Trump announced that he had picked White House lawyer Brian Miller to oversee how billions of dollars in coronavirus-related relief money is spent.

Though Miller has a long history of serving as an agency watchdog and was celebrated as Trump’s pick by some transparency experts, Democrats have pushed back on the decision. House Speaker Nancy Pelosi and others said over the weekend that Miller’s current work within the administration means he will be insufficiently neutral as special inspector general over a $500 billion corporate bailout fund, part of a $2 trillion stimulus package passed by Congress to offset some of the economic damage caused by the spread of Covid-19.

In negotiations for the third coronavirus relief package, passed on March 25, Democrats pushed for transparency measures over the half-trillion-dollar fund, which was set aside for large industries. The final bill created the office of a Special Inspector General for Pandemic Recovery (SIGPR) within the Treasury Department to audit and investigate usage of that fund.

Miller is currently a special assistant to the president and serves as senior associate counsel in the Office of White House Counsel, so he was involved in the president’s defense during his impeachment trial.

For that reason, Democrats have criticized the pick, saying Miller is not sufficiently neutral.

“This oversight position, which will be responsible for overseeing hundreds of billions of taxpayer dollars, requires complete independence from the president and any other interested party to assure the American people that all decisions are made without fear or favor,” Senate Minority Leader Chuck Schumer said in a statement Saturday. “To nominate a member of the president’s own staff is exactly the wrong type of person to choose for this position.”

Democratic Sen. Richard Blumenthal of Connecticut likened the pick to putting the “fox in charge of the henhouse.”

Prior to working for the Trump administration, however, Miller worked as an inspector general for the General Services Administration, which operates federal properties, from 2005 until 2014. In that position, he investigated scandals within both the Obama and second Bush administrations.

“He was a very serious IG at GSA,” an expert on inspectors general, Danielle Brian of the Project on Government Oversight, told the Washington Post, using an acronym for the position. “The best specific example is he went toe to toe with the GSA administrator and was largely responsible for [George W.] Bush firing GSA Administrator Lurita Doan. He wasn’t afraid of taking direct action.”

Doan was a GSA administrator who resigned from office in 2008 after being accused of using her office to help Republicans. Miller also investigated allegations that GSA officials had spent thousands of dollars partying in Las Vegas in 2010.

“He is a quality pick. You couldn’t do better. He combines loyalty to the administration with the independence you need in an IG,” agreed Keith Ashdown, former staff director for the Senate Homeland Security Committee, which has oversight over inspectors general, according to the same Post article.

Not all transparency advocates lauded the choice, however. Noah Bookbinder, who serves as the executive director for Citizens for Responsibility and Ethics in Washington, an advocacy group for ethics, criticized Miller’s nomination on Twitter.

Miller must still be approved by the Senate, at which point he would also sit on a council of watchdogs from other agencies, forming a broader oversight group. It is unclear when that confirmation would take place, however, because the Senate is out of session until at least late April.