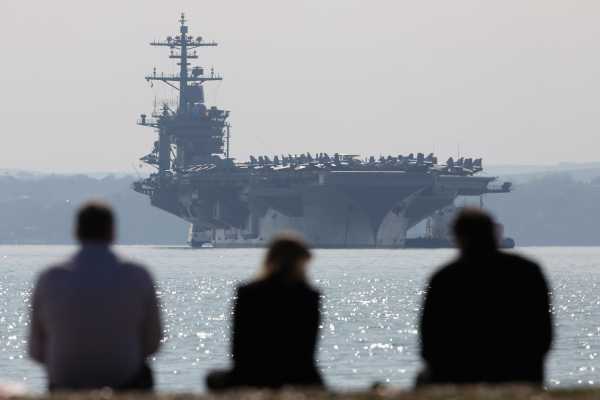 Defense Secretary Mark Esper has forcefully defended the Navy’s controversial decision to relieve a captain of his command after he wrote a pointed letter to his superiors about a Covid-19 outbreak aboard his aircraft carrier, which leaked to the press.

“I think Acting [Navy] Secretary [Thomas] Modly made a very tough decision — a decision that I support. It was based on his view that he had lost faith and confidence in the captain based on his actions,” Esper told CNN’s Jake Tapper Sunday on State of the Union. “It was supported by Navy leadership. It’s just another example of how we hold leaders accountable for their actions.”

Esper’s defense of the firing last week represents a doubling down on a decision that has received criticism from national security experts and former top military officials as a potentially politicized overreaction that could discourage other military leaders from speaking candidly about what’s needed to contain coronavirus outbreaks at military outposts, at a critical moment for global national security.

When Tapper asked if it was appropriate to relieve Capt. Brett Crozier of his command before completing an investigation into his conduct, Esper said that it was not abnormal to do so.

“All the services at times relieve commanders without the benefit of an investigation up front because they have lost confidence in them. It’s certainly not unique to the Navy. The Navy has a culture of swiftly and decisively removing captains if they lose confidence in them,” Esper said.

Crozier, who has reportedly tested positive for Covid-19, wrote in his letter that the Navy needed to get more sailors off the carrier swiftly to protect their health amid an outbreak spreading aboard the ship. “We are not at war. Sailors do not need to die,” he wrote.

President Donald Trump said during a press briefing on Saturday that the letter “looked terrible” and was “not appropriate.” He also said that he personally “didn’t make the decision.”

But the Washington Post reports that Modly told a colleague the day before Crozier was removed from his post: “Breaking news: Trump wants him fired.”

What happened on the USS Theodore Roosevelt

Crozier sent the four-page letter to Navy officials on March 30 because he was dissatisfied with the measures the service took to protect his sailors after they started testing positive for Covid-19 on the USS Theodore Roosevelt, the nuclear-powered aircraft carrier under his command.

After three sailors were medically evacuated from the carrier, which has a crew of nearly 5,000, Crozier wrote the missive that called for the Navy to act more aggressively. He asked for 90 percent of the crew to be removed so that they could be tested and quarantined properly, and so the ship could be disinfected. CNN’s Ryan Browne reports this process is now underway — half of the ship’s crew have been tested (with 155 confirmed cases as of April 5) and nearly 2,000 sailors have been taken off the carrier.

In his letter, Crozier argued for such measures because he felt there was inadequate space aboard for social distancing, and that the spread of the disease was “accelerating” despite earlier evacuations.

“[W]e are not at war, and therefore cannot allow a single Sailor to perish as a result of this pandemic unnecessarily,” Crozier wrote. “Decisive action is required now in order to comply with CDC and (Navy) guidance and prevent tragic outcomes.”

Crozier sent the message via an unclassified email to Navy officials, copying around 20 or 30 individuals. It’s unclear who exactly was copied on the email, but eventually the letter was leaked and appeared in the San Francisco Chronicle.

Initially it looked like Crozier might not be punished or fired. Statements from Chief of Naval Operations Adm. Michael Gilday and Modly suggested they were unhappy about the leak, but that Crozier would keep his command.

“I don’t know who leaked the letter to the media — that would be something that would violate the principles of good order if he were responsible for that, but I don’t know that,” Modly said on Wednesday. “The fact that he wrote the letter of his to his chain of command to express his concerns would absolutely not result in any type of retaliation.”

He also said that the letter was something “we want our commanding officers to be able to do.”

But the next day, Modly said that Crozier had shown “poor judgment” by sending his letter through email which was not secure to up to 30 people, and that his immediate superior on the ship was not among them.

“I could reach no other conclusion than that Capt. Crozier had allowed the complexity of his challenge with the Covid outbreak on his ship to overwhelm his ability to act professionally, when acting professionally was what was needed most at the time,” Modly told reporters on Thursday.

It’s unclear if Trump’s reported desire for Crozier to be fired influenced decision making for Modly, who is a political appointee. It is certainly possible that Modly’s overall assessment of the propriety of the situation was incomplete when he initially spoke to reporters.

However the decision was arrived at, when Crozier was dismissed, sailors aboard the USS Theodore Roosevelt gave him a raucous-send off with cheers and singing to show their appreciation of his efforts on their behalf.

Should Crozier have been dismissed?

Modly’s argument for relieving Crozier of his command is that he violated the chain of command and didn’t abide by security protocols when communicating his grievances.

It’s also possible that Trump — who has routinely fired people in the federal government whom he perceives as disloyal and has intervened in the military’s justice system in a manner that’s highly unusual for presidents — could have played some role behind the scenes.

When the president spoke on Saturday, he implied it might be Crozier’s fault that Covid-19 broke out on the ship after it stopped over in Vietnam, even though the stop was pre-scheduled by the regional command.

“I guess the captain stopped in Vietnam and people got off in Vietnam,” Trump said. “Perhaps you don’t do that in the middle of a pandemic or — or something that looked like it was going to be — you know, history would say you don’t necessarily stop and let your sailors get off.”

Trump also excoriated the letter as inappropriate. “I thought it was terrible what he did to write a letter. I mean, this isn’t a class on literature,” he said.

But many experts, former military officials, and top Democrats disagree with Trump’s criticisms of Crozier.

According to the Washington Post, half a dozen former top Navy officials said in interviews that “Modly’s intervention was a mistake that they feared would have a chilling effect on commanders and encourage them to suppress bad news that might upset political leaders.”

“I think the firing was a really bad decision, because it undermines the authority of the military commanders who are trying to take care of their troops, and significantly negatively impacts the willingness of commanders to speak truth to power,” retired Adm. Mike Mullen, the former chairman of the Joint Chiefs of Staff, told the Post.

John Kirby, a retired rear admiral in the US Navy and security analyst for CNN, wrote that Crozier is “guilty of a process foul” in the way he failed to send out his letter over a secure network and didn’t include his immediate boss. But Kirby argued that he ultimately doesn’t consider these errors sufficient cause for being dismissed from a post.

“We’ve seen none of this evidence, because either Modly would not share those details or because he does not possess them,” Kirby added.

Kirby argues it would’ve been more fair to let an investigation take place before taking action, and that declining to do so is both a distraction for sailors and “sends a horrible message to other commanding officers about the degree to which they can be candid about their efforts to stop the spread of coronavirus in their units.”

Top Democrats on the House Armed Services Committee agree, and released a joint statement arguing that Crozier’s chain of command offense didn’t merit a move that suggests instability or insecurity in the armed forces.

“While Captain Crozier clearly went outside the chain of command, his dismissal at this critical moment – as the sailors aboard the U.S.S. Theodore Roosevelt are confronted with the COVID-19 pandemic – is a destabilizing move that will likely put our service members at greater risk and jeopardize our fleet’s readiness,” the committee’s Democratic leadership said in a statement. “Captain Crozier was justifiably concerned about the health and safety of his crew, but he did not handle the immense pressure appropriately. However, relieving him of his command is an overreaction.”

And Democratic presidential candidate Joe Biden was even more frank about the matter.

“I think it’s close to criminal the way they’re dealing with this guy,” he said on ABC’s This Week on Sunday, “I think he should have a commendation rather than be fired.”